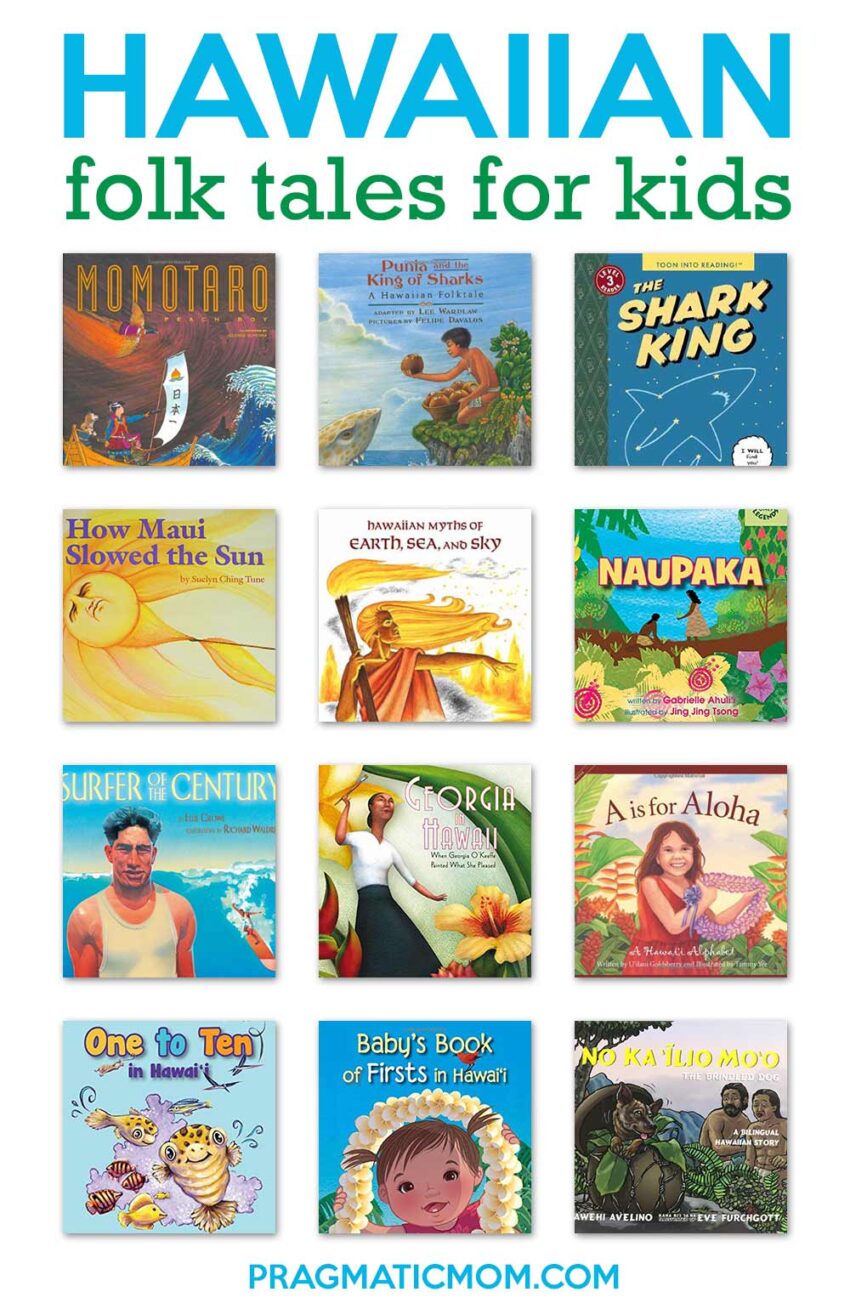 Discover Hawaiian folk tales with these children’s books! Read about the legends and mythology of Hawaii and enjoy picture books to read with your child!

When I was a child, a relative in Hawaii from my mother’s side that I’d never met sent me two picture books as a Christmas present. It was a little weird because they didn’t send a gift for either of two siblings, nor did they indicate that this was a shared gift.

One book was a Hawaiian folk tale of Pua Pua Lena Lena, a kind of magical dog who has to  retrieve the kiha pu, a conch shell that sounds an alarm if an enemy is approaching the kingdom, from spirits who have stolen it.

This is his punishment for accidentally stealing plants from the Royal Garden in order to make awa tea for his master.

I also received a beautiful version of Momotaro, the peach boy warrior, a Japanese folk tale.

Both books were treasured favorites of mine, and I still have both copies. Since then, I’ve been fortunate to visit Hawaii a few times. My husband played golf for the University of Hawaii which is another connection that brings us back there.

I’m working on a series of Folk Tale posts from Asia and the Pacific Islands. Korea was my first. Today’s post celebrates Folk Tales from Hawaii. Because I had trouble finding these stories, I’ve also included Hawaiian notable picture book biographies.

p.s. I also have a post on Pearl Harbor Books for Kids, Hawaiian Ukele,

The first two picture book are trickster tales. Pig boy is pig with magical powers that makes him impossible for humans to catch. Punia is a Hawaiian boy clever enough to trick the king of sharks.

Pig-Boy: A Trickster Tale from Hawai’i by Gerald McDermott

Pig-Boy is based on a trickster-hero Kamapua’a, who can shape shift from a human warrior to a pig. In this version, Pig-Boy is in is pig form, but beloved by his human grandmother who counsels it to slip away from trouble by changing into a myriad of forms: piglet, hog, fish, and wild boar.

Imbued with magic, Pig-Boy can transform itself as it gets itself in and out of trouble. [picture book, ages 4 and up][

Punia and the King of Sharks: A Hawaiian Folktale adapted by Lee Wardlaw, illustrated by Felipe Davalos

Punia’s father was killed by the King of Sharks trying to get the lobsters that the sharks guard. Living on yams and taro, Punia devises several schemes to trick the sharks and get lobsters for himself and his mother to eat. Will Punia’s luck run out? [picture book, ages 4 and up]

The Shark God by Rafe Martin, illustrated by David Shannon

Rafe Martin retells the story of the Shark God into a children’s version by recasting the characters into a family. Still, the story stays true to its origins of a cruel king who wants to punish children for a small transgression.

The children have helped a shark escape, and now the parents ask the terrifying Shark God for help to save them from their execution. He helps them escape to an island with a kind king in this exciting version. [picture book, ages 4 and up]

The story of The Shark King is very different from The Shark God above which surprised me. In this Hawaiian folk tale, a maiden falls in love with a man who saved her from a shark and they get married and have a little boy.

She discovers that her husband is actually the shark king, and he leaves to prepare a home for their son at the bottom of the ocean. Their son, Nanaue, has gifts from his father including a shark feature that appears as he grows older. He’s also gifted at fishing.

When the local fishermen have trouble catching fish, he becomes their target and ends up safe with his father. It’s a little sad to me though that the mother has lost both her husband and son but many of the Hawaiian myths have bittersweet endings. [graphic novel, ages 4 and up]

How Maui Slowed the Sun by Suelyn Ching Tune

The forward says that this story is inspired by Tales of the Menehune, a collection of Hawaiian myths told to Caroline Curtis by Hawaiian authority Mary Kawena Pukui.

Maui is a half-god young boy who slowed the sun using his strength and wits so that the day would be longer for the fisherman who needs more time to reach the fish far out in the sea, for the farmers who need a longer day for the crops to grow, and for the women who need time for the tapa cloth they make to dry. [picture book, ages 4 and up]

For those who like Edith Hamilton’s Mythology books, this Hawaiian version is very similar to twelve tales that help to explain Hawaii’s natural wonders. Some of these stories originate from Polynesia, brought over and told in an oral tradition.

How Maui Slowed the Sun is included in a similar version to the picture book above. [mythology chapter book, ages 9 and up]

Hawaiian Legends for Little Ones is a new board book series that introduce preschoolers to Hawaiian culture, history, and its natural world. [board book series, ages 2 and up]

*Beachhouse Publishing has many books about Hawaiian culture but I haven’t included the rest of them since I could not get them through my library system and did not want to recommend books that were not widely available. For those who want to purchase books, I’d recommend going to their website.

You will go far away from your land and your people and be gone a very long time. You will never marry and you will never rule Hawai’i.

Her mother foretold Princess Ka’iulani’s future on her deathbed. As a teenager educated in Britain, Ka’iulani faced political problems that had plagued Hawai’ian royalty for decades.

Sons of American missionaries, haoles, had become so powerful that they took away power from her uncle, King Kalākaua, and overthrew her aunt when she became the ruler. Ka’iulani, at just seventeen, embarked to the White House to talk to President Cleveland in an attempt to save her country.

While the president urged Congress to find a way to restore her power, the haoles refused to disband their government. After President Cleveland left office, Congress voted to annex Hawai’i, valuable as a military base, a refueling spot, a trading center, and for its fertile land.

That Hawai’i feels like a foreign country even though it’s our 50th state reflects its acquisition, fueled by greed and sanctioned by the American government. [picture book, ages 6 and up]

Surfer of the Century: The Life of Duke Kahanamoku by Ellie Crowe, illustrated by Richard Waldrep

Many might have heard of the father of modern surfing, Duke Kahanamoku, but did they also know that he was an Olympian swimming champion?

From creating the surfboard to facing racism even as an elite athlete, Duke’s legacy lives on in the sport of surfing that he lovingly promoted as Hawai’i’s gift to the world. The son of Polynesian royalty went on to become Hawai’i’s first state ambassador, spreading the message of aloha that he embodied. [picture book biography, ages 6 and up]

Georgia in Hawaii: When Georgia O’Keeffe Painted What She Pleased by Amy Novesky, illustrated by Yuyi Morales

Georgia O’Keefe was commissioned by Dole Food Company (then called Hawaiian Pineapple Company) to paint a pineapple. She traveled to Hawaii in February 1939.

The company would not let her live near the fields, but she explored the Hawaiian Islands her own way and she painted the flowers and landscapes of Hawaii. She eventually painted the pineapple they requested too. [picture book biography, ages 4 and up] The President From Hawaii by Dr. Terry Carolan and Joanna Carolan, illustrated by Elizabeth Zunon

Hawai’i had a monarchy that was taken away,

but the people’s mana was strong , and it still is today.

While this rhyming picture book is about Barack Obama’s upbringing in Hawai’i, it also infuses the text with Hawai’ian words and quotes that reflect the legacy of growing up in a culture that values harmony, and respect for others and for all things. [picture book, biography, ages 4 and up]

“We look out for one another … we deal with each other with courtesy and respect, and most importantly… when you come from Hawai’i, you start understanding that what’s on the surface, what people look like, that doesn’t determine who they are.” Barack Obama, Honolulu 8/8/08

Picture Books to Learn About Hawaii

The Story of Hula by Carla Golembe

Is hula a dance, a song, a chant? Is it a travel back in time? Or is it a story? A drama? It is all of that and more. Hula reflects the oral tradition of ancient Hawai’ians and was a form of communication and connection to Hawaiian life. It was both revered and outlawed during its long history in Hawai’i. Discover the layered treasure of hula in this picture book that includes a CD. [picture book, ages 4 and up]

A is for Aloha: A Hawaiian Alphabet by U’ilani Goldsberry, illustrated by Tammy Lee

Even though this seems like just an alphabet book for kids learning their letters, this picture book has sidebars that detail Hawai’ian history, culture, and language.

This book also works for those seeking a book for mastery of the alphabet; there are also simple rhymes for each letter that reflect important highlights of Hawai’i. [picture book ages 2 and up]

One to Ten in Hawaii by BeachHouse Publishing, illustrated by Kristi Petosa-Sigel

Celebrate the milestones of childhood — first smile, first laugh, first step, first word — in this charming book set in Hawaii. [board book, ages 0 and up]

Thank you to Megan Takemoto for these suggestions: “Kawehi Avelino, Leimomi Mo’okini Lum and Auntie U’i are other Hawaiian authors. If you go onto the Hawaii Public Library website and look up Hawaiian or Polynesian legends, you can find many Native Hawaiian and Polynesian authors and books for kids.”