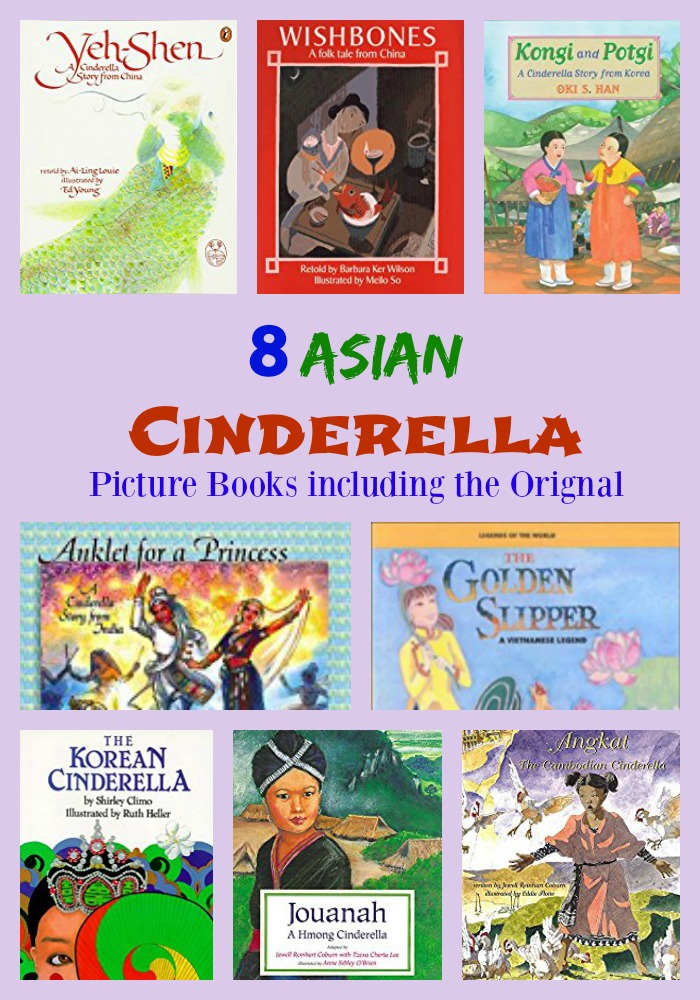 I’ve always wondered why Cinderella is such a popular fairy tale the world over. According to Cinderella: A Cross Culture Story, the original Cinderella dates back to China as early as 850 A.D with Yeh-Shen. The oldest European version was from Italy in 1634, traveling from China.

The elements of all the Cinderella fairy tales make for a good story: good wins over evil, rags to riches are possible, and, of course, the happily ever after ending. There’s also the widowed and sometimes hapless father who seems totally unaware of his bad marital choice, the conniving new step-relatives, and the heroine who is rewarded for her goodness by a magical element rather than through her own fortitude.

It makes me wonder if a Cinderella narrative is good for girls? Maybe this is why the Wonder Woman movie is making such waves with Amazons who don’t need men and are strong and fierce warriors who, frankly, make the men they battle look wimpy.

What do you think? Are you Team Cinderella or Team Wonder Woman?

Angkat appeared in an 18th-century French essay while the author was researching Khmer folklore. The story, of course, is much older than that, but the exact age is not known. You can see the story’s roots from the Chinese version, Yeh-Shen, with the same element of magical fish.

Life changes for a lonely fisherman and his daughter when he meets a widow with her daughter across the fish ponds. Family discord centers around who will be called Number One Daughter. Traditionally, it should be Angkat, as the daughter of the father, but the stepmother schemes to get this title for her own daughter. The Number Two daughter’s role is that of the family servant, and Angkat is tricked into this position through a rigged fishing contest. Angkat ends up releasing her fish into the fish pond and caring for it as a pet. Her stepsister finds out and cruelly cooks the fish.

A Spirit of Virtue tells Angkat that her fish’s bones are magical, and finds two golden slippers in its place. Following the Spirit’s advice, she places on a slipper on the open window sill and hides the other. A blackbird carries the slipper to the crown prince, who searches for the mate, wanting to marry her.

The story has the traditional shoe finding element, but then the story departs from the typical ending. Her father, stepsister, and stepfather are overcome with jealousy at her happiness. They kill her to get the stepsister into the palace. Where Angkat was killed, a banana tree has sprouted up. When it’s cut down, bamboo takes it place. The prince finds this bamboo grove and is able to reunite with Angkat, with the help of the Spirit of Virtue. Angkat’s family is banished from the land, and she becomes the rightful queen. [fairy tale picture book, ages 6 and up]

Yeh-Shen: A Cinderella Story from China by Ai-Ling Louie, illustrated by Ed Young

This is the Cinderella story that started them all, back in 850 A.D. This is China during the Tang Dynasty. The Danish Vikings sailed up the Thames in 851 A.D. Algebra was invented several decades earlier by Arabic scholar al-Khwarizmi. The Khazar kings convert to Judaism and preside over the Khazar kingdom until the 960s. Image of caves in Southern China from Chasing Climbing

As was the custom in China in the past, men had multiple wives. Yeh-Shen was an orphan of one of the two wives of a cave chief named Wu who lived in Southern China. He too got sick and died shortly after her mother, leaving Yeh-Shen with the remaining wife who also had a daughter her age. Because Yeh-Shen was more beautiful than her daughter, she was treated poorly. Her only friend was a fish she caught and cared for as a pet. When her stepmother caught wind, she caught the fish and cooked it.

A mysterious man tells Yeh-Shen of the power in the fish’s bones to grant her wishes. Yeh-Shen wishes for clothes to wear to the village feast but she is cautioned not to lose the slippers. After she loses one slipper, it finds its way to the Emperor who conducts a search and, instead of punishing the thief of the golden slipper, falls in love with her and marries her. The stepmother and stepsister end up crushed to death in a shower of flying stones. [fairy tale picture book, ages 4 and up]

Wishbones: A Folk Tale from China retold by Barbara Ker Wilson, illustrated by Meilo So

This is a retelling of Yeh-Shen. The deviation is that the girl is named Yeh Hsien and she uses the magic fishbones for riches that she hides in her corner of the cave. The slipper also finds its way to the King of T’o Huan from the cavepeople. When she marries the king, he uses up the wishes on the bones and then buries the bones near the seashore where the tide washes them away.

It’s interesting to me that China’s origination of the Cinderella story emphasizes the beauty of small feet, as China had the feet binding custom for noble women starting in the 10th century, lasting for ten centuries. Even though Europeans did not have the same beauty standard for feet, the slipper being so small as to fit only Cinderella persisted in their recountings. [fairy tale picture book, ages 4 and up]

This is a different take on other Asian Cinderella stories about a fish and its bones that have magical powers. In this story, it’s a chicken and the feet, when planted, grow an enchanted tree with treasures including gowns and jewelry. When a prince sees the tree, he makes an offering and takes a ring from the tree. The ring squeezes his finger painfully and can not be removed. The prince dreams of a girl who is able to remove the ring. His father immediately announces that any girl who can remove the ring will become his son’s bride. Even in her ragged clothes, Abadeha is able to remove the ring and they have their fairy tale ending. [picture book, ages 4 and up]

The father in this Hmong folktale changes Jouanah’s mother into a cow and then selfishly remarries another woman with a daughter her age. He’s easily manipulated by the evil stepmother who gets him and Jouanah to do all the chores from dawn to dusk. She learns of the silken thread the cow spins, and gets him to destroy it, and sacrifice the cow. Soon, the father dies as well.

When the New Year arrives, Jouanah is too busy doing the cruel tasks her stepmother gives her to attend the village festivities. On the third day, she finds a beautiful outfit in her sewing basket and joins the celebration, catching the eye of the son of the village elder. Jouanah is not recognized by her stepfamily but loses one shoe in her haste to get home before them. The ending is the same as all Cinderella stories but in this story, the stepmother and stepsister continue to live as they did, in misery. [fairy tale picture book, ages 6 and up]

Anklet for a Princess: A Cinderella Story from India by Lila Mehta, illustrated by Youshan Tang

This Cinderella story has roots in “Nagami,” Jewel of the Snake, a South Asian folktale that is believed to be at least 1,000 years old, preserved through oral tradition. Cinduri lost her mother and father in the cholera epidemic that swept her village, and she is now left with her stepmother and stepsister who make her do all the chores and give her only scraps to eat. On her way back from fetching water from the lake, Cinduri encounters a talking snake who adopts her as its goddaughter and pledges to help her. When the Crown Prince visits on the ninth night of the Navaratri Festival, she is not allowed to attend. In this Cinderella story, it’s the anklet that the prince uses to find her. [fairy tale picture book, ages 4 and up]

Kongi and Potgi: A Cinderella Story from Korea by Stephanie Plunkett, illustrated by Oki S. Han

In this version, the father believes he is marrying a kind-hearted woman with a child his daughter’s age to help guide his own daughter, Kongi, through adulthood. She shows her true nature the day after the wedding. Like the Korean Cinderella, Kongi is also helped by magical animals — an ox, a toad, and sparrows — that appear suddenly. Angels also appear to help her get dressed for the palace, bringing finery including a sedan chair. There’s a happy ending for the stepmother and stepsister too. They are forgiven by Kongi and spend the rest of their days helping others and doing good deeds. This is truly a fairy tale! [fairy tale picture book, ages 6 and up]

The Korean Cinderella by Shirley Climo, illustrated by Ruth Heller

This Korean version of Cinderella is similar to the well known Disney version, with magic at work to help the young girl. This story is actually a compilation of three Korean versions but also has the lost shoe element, and the happily ever after. [fairy tale picture book, ages 4 and up]

The similarities to Yeh-Shen are not surprising given that China ruled Vietnam for a thousand years. This story is also called The Brocade Slipper, and the slight deviations are a mysterious “godmother-like” figure that helps Tam, the daughter. There’s also a fish in this story, and luckily, it does not get consumed. The father in this story dies of a broken heart when he sees how poorly his daughter is treated by the second wife. The slipper is slightly different too. It is procured from the ground by the rooster that Tam treats kindly and falls off while she’s riding on horseback to the autumn festival. A soldier finds the shoe and gives it to the prince who conducts a shoe fitting right at the event. [fairy tale picture book, ages 6 and up] 6 thoughts on “9 Asian Cinderella Picture Books including the Original”