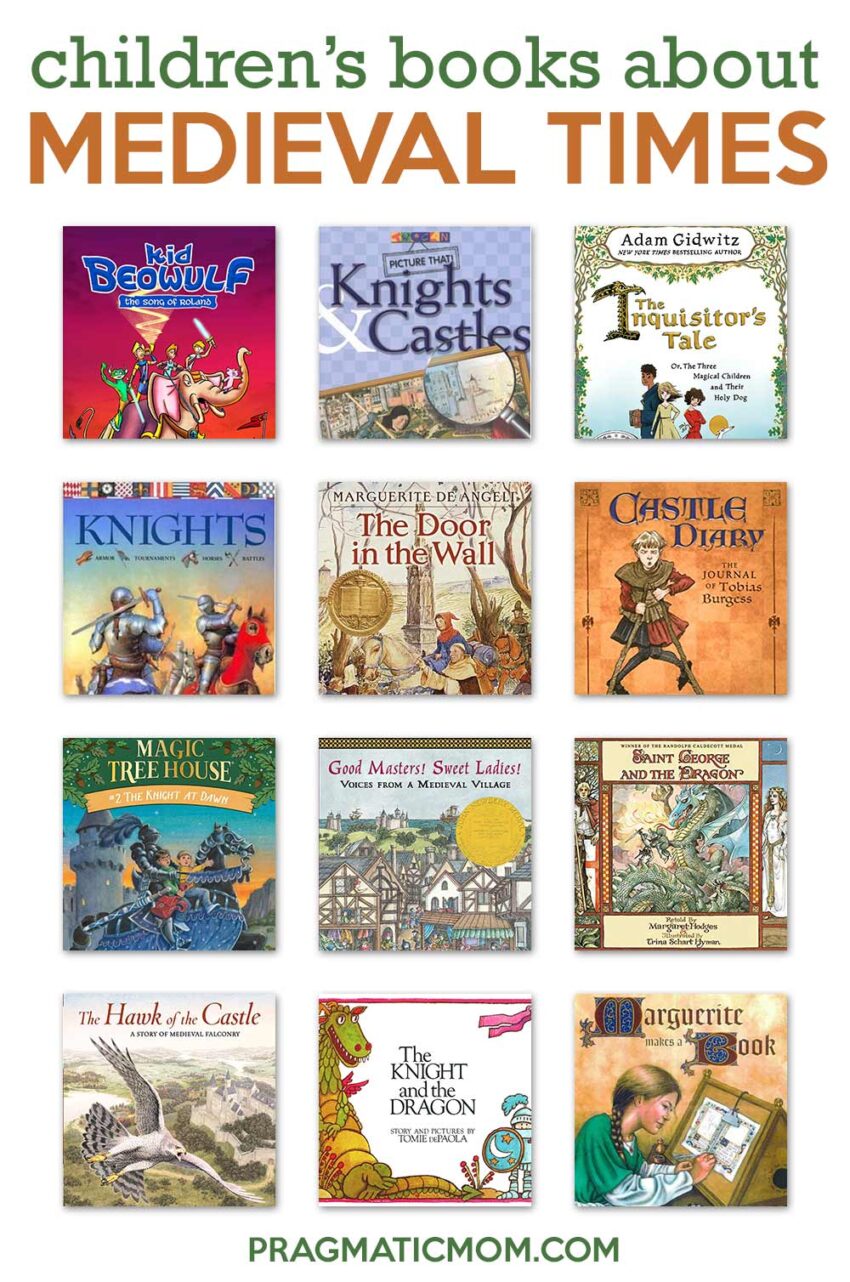 Inside: Relive history with these Medieval Times books for kids! Read about historical fiction during these times, from picture books to chapter books.

Kids who like knights, princesses, and castles will like books set in Medieval Times. Adam Gidwitz writes in the back notes of The Inquisitor’s Tale:

I hope, if nothing else, this book has convinced you that the Middle Ages were not “dark” (never call them the dark ages), but rather an amazing, vibrant, dynamic period. Universities were invented, the modern financial system was born, kingship as we know it developed — and so did the modern strife the currently grips our world.

It was a time when people were defining how they lived with the “other,” with people who were different from them. The parallels between our time and theirs are rich, poignant, and, to often, tragic.

The Middle Ages, or Medieval Times, in Europe was a thousand-year period of history that started from 500 AD until 1500 AD. It gets a bad rap in books as evidenced by 1o Worst Misconceptions About Medieval Life You’d Get From Fantasy Books:

I found different kinds of books to bring this period alive from fiction books to folk tales, a play, and an art history book on castles and knights. If your kids like this period, there are a lot of options to see what life was like just through books.

How about you? What period of history fascinates you?

Set during the 1400s, Marguerite’s father is the most famous manuscript illuminator in Paris. He’s trying to finish a prayer book for Lady Isabelle, his patron, but his hands are trembling with age lately. Together, he sets off with his daughter to get the materials they need.

The illustrations in this lovely picture book include illuminations decorating the text, just like Marguerite’s father would have done. [picture book, ages 5 and up]

9. The Knight and the Dragon by Tomie dePaola

A knight and a dragon square off against each other in this delightful tale that ends in a restaurant enterprise. dePaola has sprinkled in Medieval history with the knight’s armor, weaponry, and training apparatus. [picture book, ages 2 and up]

8. The Hawk of the Castle: A Story of Medieval Falconry by Danna Smith, illustrated by Bagram Ibatoulline

A falconer and his daughter live in the castle with the hawk that he trains. In rhyming stanzas, this picture book depicts the preparations and equipment needed to take the hawk out to train. Sidebars have more detailed information about falconry. The author’s note has more details on falconry:

“Falconry dates back to China and the Middle Ages more than three thousand years ago. It became extremely popular in Europe in the Middle Ages…Many castles housed falconers whose only job was to capture, train, and care for birds of prey so they would be ready to hunt with noblemen and their guests.”

7. St George and the Dragon by Margaret Hodges

The legend of St. George, the patron saint of England, is retold in this folktale. A dragon terrorizes a hilltop town, burning it with its fire, and eating its livestock. Soon, there weren’t enough sheep, and people were drawn from a lottery to be sacrificed to the dragon.

When Princess Sabra’s name was drawn, a knight was riding by, George of Lydda who dared to fight the dragon. He vanquished the dragon, but did not kill it; only rendering it docile. [folk tale picture book, ages 5 and up]

In the Afterward, more details of the little-known St. George are revealed: tales of George the Dragon Slayer were widely told in the Middle East over a thousand years ago and brought home by the English Crusaders.

According to legend, St. George was a Roman soldier of Greek origin and officer in the Guard of Roman emperor Diocletian, who was sentenced to death for failing to recant his Christian faith. In 1348 Edward III made him the patron saint of England.

Some say his grave lies in Persia in a place where bloodred roses flourish their blossoms through toils of briar, beside still, deep water.

This Newbery award-winning book is a play with parts for an entire class set in a Medieval Manor in England during 1255. The village is well represented from the low-born to the high-born and those in between, and their stories interweave, just as life would have intersected for them.

Whether you read this story in parts to be performed, or by a single person, the takeaway is of a vibrant and raucous village where everyone has their story to tell, of their personal struggle. If you want one book to understand the Middle Ages, I recommend this one. [a book of miniature plays, ages 10 and up]

Jack and Annie have traveled back in time to the middle ages and find themselves in a castle with a secret passage. There’s a feast going on but they aren’t exactly welcome guests. [early chapter book, ages 6 and up]

The road to becoming a knight starts with birthright but is not a certainty. Eleven-year-old Toby Burgess starts off as a page in his uncle’s castle, and this book is a diary of his twelve months of learning the skills and duties of a squire. The etiquette of a noble family is the first thing Toby must learn.

While his duties are to serve his aunt and uncle, he learns that well-born servants have servants! Toby studies archery and sword fighting but also writing (in Latin), as part of his job is to write letters for his aunt. Not everything is dull — there’s The Hunt, Jousts, the harvest, and a friendship with a poacher.

Toby’s diary of his year as a young noble during the Middle Ages brings this period alive. [nonfiction, ages 9 and up]

3. The Door in the Wall by Marguerite De Angeli

I remember loving this book as a child in elementary school. A Newbery award-winning book, it tells the story of Robin, the son of a great lord who has gone off to the Scottish wars with the king. His mother, too, is gone serving the queen.

Robin is supposed to serve as a page in a castle to the north, but when he gets sick and his legs don’t work, the friars take care of him. He learns that even though he can’t ride into battle, there are many ways to serve the king. [chapter book, ages 9 and up]

Nonfiction lovers can flip through this extensive book on Knights that covers every aspect of their lives from religion to training to armor to battles. The illustrations and sidebars bring a wealth of information that is fun to read about. [nonfiction, ages 8 and up]

1. The Inquisitor’s Tale: Or, The Three Magical Children and Their Holy Dog by Adam Gidwitz, illustrated by Hatem Aly

His vibrant tale weaves the stories of three kids — one Jewish, one Saracen, and one with visions — into an action-adventure set in the Middle Ages. His story reflects the Spanish Inquisition going on at the time, while also bringing to life an action-packed adventure that will appeal to Percy Jackson fans.

Illuminations in the book’s margins by Hatem Aly bring the story to life, in the same way, an illustrator from that time would have done which is to say that some of the drawings are doodles not related to the text while other drawings reflect the narrative. [chapter book, ages 8 and up]

If you want to explore the Middle Ages through art, use this book that centers on knights and castles, but also includes what everyday life was like for both rich and poor living in a Medieval village. [nonfiction book, ages 10 and up]

It’s hard to imagine what a castle was like when it was first built if you’ve visited one today. This book takes the castle back to the beginning, in 600 BC, when it was a village surrounded by a wooden fence, all the way up to modern times.

During the thousand-year-plus period, the castle was rebuilt many times with new innovations to withstand invaders. In the Middle Ages, the castle is complete with features like a drawbridge and ditch. It still falls and gets rebuilt yet once more, this time without a keep.

For those who have visited a castle or would like to, use this book to imagine what it once was from what it is today. [nonfiction, ages 7 and up]

A graphic novel series that draws kids into the classic Beowulf and introduces them to the ancient geographic history of Europe and the medieval world. [graphic novel, ages 9 and up]

“This has a lot of action and adventure, a flying pet dragon,  a magical school, and evil adults who must be thwarted. Add to that an appealing main character who remains quiet but still manages to be powerful, sparkly flying dragons, and a tween saving the day… if it had a few explosions, it would be perfect. But at least there are a couple of fires. Seriously, this is a great dragon [medievalish] novel.” [middle grade, ages 10 and up]

p.s. Use this list to get medieval with your next dog’s name…

A manuscript dating back to the 1400s contains not just tips for hunters of the day, but a list of 1,065 names suitable for the dogs that often accompanied them, including Synfull, Honeydewe, Dolfyn, Tynker, Nosewise and — the unimaginative — Nameless. “Next pup you adopt, give it a medieval moniker to celebrate this long history,” writes Madeleine Muzdakis.