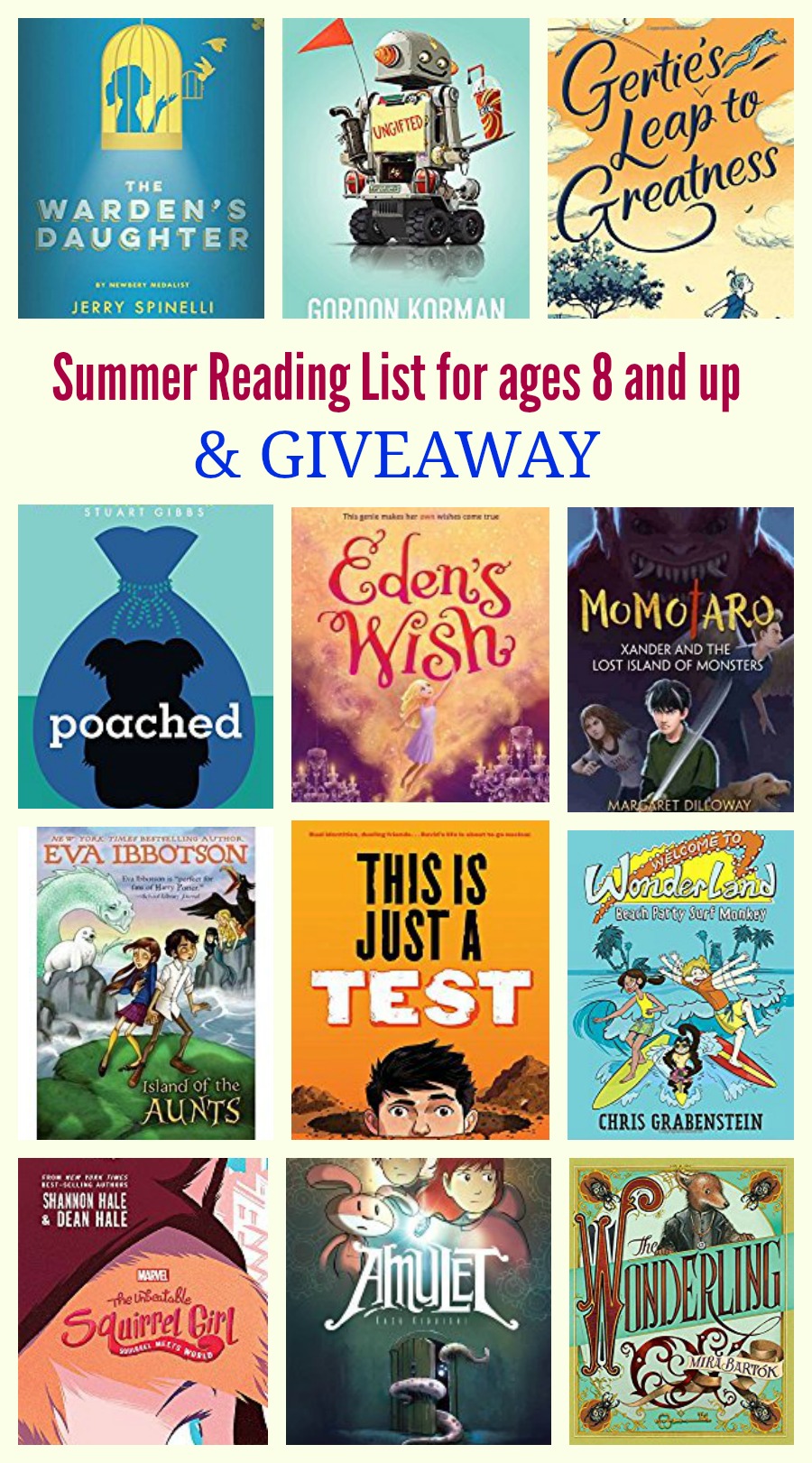 I have a stack of middle grade chapter books to review so I thought I would do a book tasting to screen them. It’s basically a perusal — check out the cover, the back cover, the flap summary for first impressions — then read the first few chapters, skip around the middle reading here and there, and see if you can guess the ending. If the book grabs me, then I’m pulling it aside to read in depth.

I’m also including my sixth grade 12-year-old son’s book recommendations of the books we’ve read together. He like Rick Riordan and fantasy adventure like Percy Jackson, but also mysteries, nonfiction, and graphic novels. Here are his recommendations:

I loved Schooled by Gordon Korman so when I saw Ungifted at a used bookstore, I snapped it up for my son. Korman knows how to write for middle school kids. This is a funny, realistic story about a boy who evades punishment by being accidentally enrolled in a school for gifted students and the transformation he creates by being the average student that he is. We are almost done with it and will seek out more of his books. [chapter book, ages 8 and up]

The Island of the Aunts by Eva Ibottson

Readers who like the Half Magic series or Roald Dahl will like this British realistic fantasy caper about aunts living on a remote island with magical creatures. My son read this for a class assignment and we both really liked it. It’s perfect for readers who think Harry Potter might be scary because it has that same fantasy magical element but is a more gentle story. [chapter book, ages 8 and up]

My son picked the first two books from a used bookstore and he’s enjoyed it so much we’ve read all the books written so far, and are waiting impatiently for more. Teddy is a sixth grade boy who lives at a zoo with his world-renowned primatologist mother, and wildlife photographer father. FunJungle is a new state-of-the-art zoo built by a billionaire for his seventh grade daughter, Summer. Someone is trying to sabotage the zoo, and Teddy’s detective skills are called into play. Working with Summer, Teddy has to find culprit or risk juvenile hall since often he’s the main suspect. This series also has an endangered animal environmental message. [chapter book series, ages 8 and up]

My son and husband and huge fans of this futuristic fantasy manga series. [graphic novel, ages 8 and up]

I have too many middle grade chapter books to list all of them here, so I’ll do this in two parts. The book giveaway is at the bottom.

Gertie always had at least one mission in the works, and she never, ever, failed to complete her missions. It didn’t matter that she wasn’t the fastest or the smartest or the tallest, because what made Gertie a force to be reckoned with was the fact that she never gave up.

Lauded as the next Ramona the Pest, this book has been getting a lot of accolades. The first chapter really pulled me in. I’d describe it as Raymie Nightingale by Kate DiCamillo meets Clementine by Sara Pennypacker. Fifth grader Gertie Reece Foy is on track to be the greatest fifth grader in the world. She has to in order to keep her mother from moving away from their Alabama coastal town without her, her father, and her Great-Aunt Rae to marry a man in Mobile. [chapter book, ages 8 and up]

The playful way this book is written reminds me of Kate DiCamillo’s Flora and Ulysses: The Illuminated Adventures, but this is actually a Marvel comics character come to life. Gamers will like this book. I will try with my son who loves the video game Injustice. [chapter book, ages 9 and up]

My son really likes the Escape from Mr. Lemoncello’s Library series so I think he will like this. It also has graphic novel illustrations throughout the book making it very reader-friendly. My son likes Grabenstein’s breezy style of writing, and this book plot might hook him: P. T. Wilkie lives in a wacky motel in a Florida beach town and he’s going to convince YouTube sensations who are filming their first movie to use his hotel as their set. It looks like another fun caper adventure. [chapter book, ages 8 and up]

Twelve-year-old Eden has escaped her prison; she’s a genie stuck in a lamp and is now posing as a new kid at a California middle school. She can’t escape her old life though and gets caught in an old conflict between powerful immortals including a former genie who wants the lamp and its power. This looks like a fun series! Eden is a strong girl character with a sense of humor. She gets caught in both a human and genie conflict which is a heady mix of adventures! [chapter book, ages 8 and up]

This Is Just a Test by Madelyn Rosenberg and Wendy Wan-Long Shang
This is a breezier read than The Green Glass Sea but both books revolve around WWII and the nuclear bomb. This Is Just a Test is also the coming of age story of an Asian Jewish boy

The Warden’s Daughter by Jerry Spinelli

Spinelli knows how to write for kids; he just has that talent. This is the story of Cammie, twelve years old, the motherless daughter of the country jail warden. This summer she decides to recruit a mother for herself. This book has been getting rave reviews; Randomly Reading’s review is here, This Kid Reviews Books’ review is here, and Here’s To Happy Endings’ review is here.

I’d give this book to kids who like Al Capone series by Gennifer Choldenko and, of course, to Jerry Spinelli fans. [chapter book, ages 9 and up]

The Wonderling by Mira Bartók

A home for wayward and misbegotten creatures is run by a cruel and evil villainess. These creatures are part human and part animal. Kids who like fantasy, steampunk and richly imagined worlds will love this book. I’d recommend to kids who like James Patterson Maximum Ride series, or kids who loved The Guardians of Ga’hoole and are now ready for something a tad more advanced. [chapter book, ages 10 and up]

Momotaro: Xander and the Lost Island of Monsters by Margaret Dilloway

Described as an Asian American Percy Jackson, I bought it for my son because I thought he would enjoy it as he loves anything by Rick Riordan. Alas, the cover art turned him completely off and he refused to read it.  [chapter book, ages 8 and up]

The Other Boy by M. G. Hennessey

The story draws you in with 12-year-old Shane who’s going to miss his big baseball game to visit his father in San Francisco. In the first chapter, there’s no indication that he’s transgender; he seems like a typical 12-year-old with a crush on a girl and a talent for drawing cartoons. I really like how the author is setting up the reader to understand Shane and bond with him before showing his struggles with his identity. There are also pages of his cartoons sprinkled throughout the book.

The Other Boy is the fictional story of a 12-year-old transgender boy living in stealth and his journey to acceptance. It shows the different ways people react to a transgender child—fathers, mothers, doctors, teachers, friends, bullies—and also walks the reader through what it feels like to be trans. [chapter book, ages 9 and up]

Come On In, America: The United States in World War I by Linda Barrett Osborne

It’s the 100th anniversary of America entering WWI and this nonfiction chapter book details the events that lead up to it, exploring the how and why and how this changed the course of history. This book also studies the lives of women and African Americans during this time and how war shaped their opportunities for work. History buffs will enjoy this book. [nonfiction chapter book, ages 10 and up]

Come On In, America: The United States in World War I by Linda Barrett Osborne

Momotaro: Xander and the Lost Island of Monsters by Margaret Dilloway

Please fill out Rafflecopter below to enter. Please list your first and second choice in the comments. I can only mail to U.S. addresses due to the high cost of shipping.