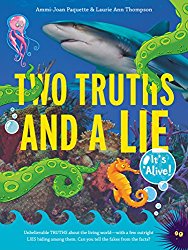 Truth is stranger than fiction, but it is because Fiction is obliged to stick to possibilities; Truth isn’t. Mark Twain

Before I talk about this new nonfiction book coming out at the end of June, I have a “small world” story. I run the social media for two restaurants that the father of my son’s best friend owns, Common Ground. To promote Common Ground in Arlington, Massachusett’s new function room, I decided to hold a pop up Holiday Market. A local children’s book author signed up … and that person turned out to be Ammi-Joan Paquette, who lives nearby.

Then, I went to a book signing event for Maria Gianferrari who always leaves the best comments on my blog. I sat in the back and I didn’t have my glasses on which means I can only really see about 5 feet in front of me. She introduced her amazing book agent … and it turned out to be Ammi-Joan Paquette!

Now that we all know each other, let’s move on to their new book …

Have you ever played that party game 2 Truths and a Lie? The idea is that each person makes three statements and then everyone else guesses which is the lie. It can be surprisingly hard to figure out the lie.

In this nonfiction book, the idea is the same but the Truths are based on biological wonders in nature. Three stories are presented along with photographs but one of them is not true. Can you guess which one?

There is now an Educators’ Resource for Ammi-Joan Paquette and Laurie Thompson’sTwo Truths and a Lie: It’s Alive. The guide was written by educator Melissa Guerrette. You can find it here.

So, you just read about the weirdly shaped fleeceflower from China; the vast interconnected forest-which-is-also-one-giant-tree called Pando; and a roundup of super plant tricks including their ability to communicate with one another and even with different species. All three of these stories are hard to believe — but two of them are actually true. Can you figure out which one is not?

This is the kind of nonfiction book for kids who like games of any kind, from apps to boardgames. The fun is figuring out the fact from fiction. Besides the three stories — 2 true, 1 lie — there are side panels with fun facts that include one falsehood. Answers are included in the back! [nonfiction book, ages 8 and up]

Win one of three copies of Two Truths and a Lie: It’s Alive. Please fill out the Rafflecopter below to enter. I can only mail to U.S. addresses due to the high cost of shipping.

I’m part of a blog tour! Please check out the stops:

23 thoughts on “Two Truths and a Lie: 3 BOOK GIVEAWAY”