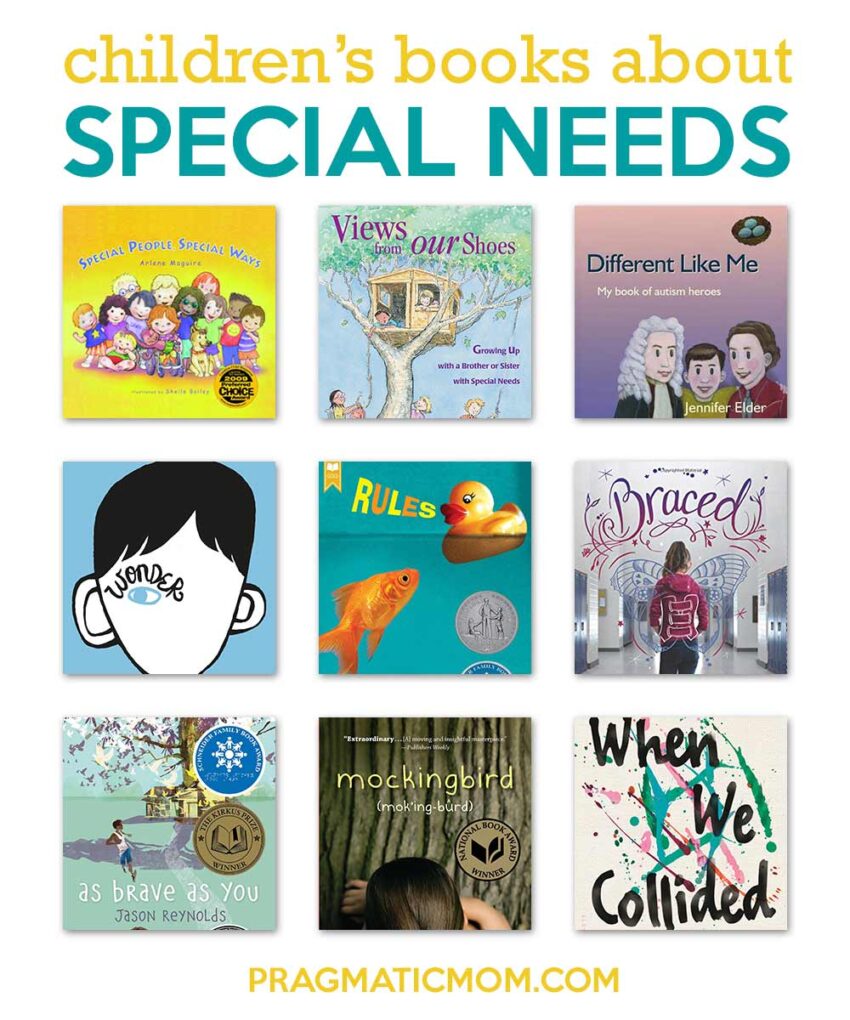 Please welcome my guest author today, Sandra Woffington, with a special needs book list. Her book, Evil Speaks: Warriors and Watchers Saga #1,  is a middle grade novel that follows teens with disabilities on an epic, mythological adventure. Sandra is a middle school teacher who is passionate about teaching her students not to just tolerate those with differences – but include them.

Evil Speaks not only takes young readers on an epic mythological journey, it helps to break down stereotypes and encourage inclusion of people from all walks of life.

Evil Speaks follows the journey of this unique crew, along with Benny, a lonely fifteen-year-old whose paranoid mother has moved him from town to town after the disappearance of his father at age three. Benny has had enough. After a particularly bad argument, he decides to run away. Just as he packs his bags—boom!—the house explodes, catapulting Benny into a world he never imagined existed. The trail leads him to a gated neoclassic building in the woods where he meets this unlikely band of heroes, all who seem vaguely familiar to Benny. As unique and different as they all are, they share one common thread: each of them lost a parent on the exact same day. As they set out to uncover the mystery, the only clue they have to follow is the whereabouts of Benny’s grandfather, a strange—and dangerous—man. They must quickly learn to become warriors before the seven gates of evil are opened forever. [chapter book with special need blind, deaf, and paraplegic, for ages 8 and up]

Special Needs Books for Ages 4 through 16

Views from Our Shoes by Donald Joseph Meyer, illustrated by Cary Pillo

45 siblings, ranging in age from 4 to 18 share essays about life with a special needs sibling, including autism, cerebral palsy, developmental delays, ADD, hydrocephalus, visual and hearing impairments, Down and Tourette syndromes. These personal stories help children understand and learn about children much like them who live with special needs. [nonfiction essays, for ages 9 and up]

Different Like Me: My Book of Autism Heroes by Jennifer Elder and Marc Thomas

Quinn, 8, a young boy with Asperger’s Syndrome, tells young readers about the achievements and characteristics of his famous autistic heroes: Albert Einstein, Dian Fossey, and Wassily Kandinsky to Lewis Carroll, Benjamin Banneker, and Julia Bowman Robinson, among others. All excel in different fields, but they are united by the fact that they often found it difficult to fit in-just like Quinn. This book inspires children and others to see that different does not mean less, it just means different. [picture book, ages 8 and up]

August Pullman is born with a combination of genetic flaws that alter his face and ears to hideous proportions. For two years, he wears an astronaut’s helmet in public. His mother homeschools him until fifth grade when Auggie enters Beecher Prep school. Wonder is an incredible story, told from various perspectives: Auggie’s sister, her boyfriend, and two children who befriend Auggie. Each shares the experience of gaining compassion for a child who wants nothing more than to be accepted and included. [middle grade, for ages 8 and up]

Catherine, 12, struggles to find normal, but her brother with autism dominates much of her life. She teaches David “the rules,” such as “keep your pants on in public,” for selfish reasons: to prevent her own embarrassment. Catherine learns to accept differences as normal, as she forms a friendship with Jason, a boy in a wheelchair who communicates through word cards. This is a powerful, humorous, poignant story of inclusion. [chapter book, for ages 9 and up]

Note that Disability in KidLit is critical of Rules specifically:

While Jason becomes more independent throughout the book, the description and treatment of David remain largely negative. David’s parents don’t respond to him when he uses echolalia, and reprimand Catherine for doing so. Instead of recognizing David’s communicating as valid, his family chooses to tell David that communication is only valid if done in a specific, non-autistic way. This sends both autistic and non-autistic readers the message that it is okay to ignore autistics communicating in the ways that work best for us. It reinforces the idea that there is one true way to communicate when really there is a multitude and they are all valid. This attitude encourages the idea that autistic people need to be taught to be non-autistic, and is continued throughout the book with the list of rules Catherine keeps to teach David to “act proper.” She goes so far as to hand David a list of rules to follow when they go out to Jason’s house together. This treatment of David is unfortunately common, and it is not okay. As an autistic individual, I cannot recommend a book to other autistic individuals looking for representation where the autistic character experiences so many of the awful experiences that many autistic people have to go through, often from his own family.

Rachel Brooks is a middle school student, hoping to earn a position as forward on the soccer team. She has friends, likes Tate and can’t wait for the new school year—until her doctor announces the curve in her spine now requires that she wear a brace twenty-three hours a day. It changes how her clothes fit, how she kicks a ball, and how everyone sees her. Rachel learns that true courage and strength comes from how she handles the many curves life throws her way. [chapter book, ages 8 and up]

As Brave As You by Jason Reynolds

This novel examines a deep question: is bravery and becoming a man only about proving something, or is it just as important to own up to what you won’t do? Two brothers, Genie and Ernie, leave New York to spend a summer with their blind grandfather in Virginia. Who is braver? [chapter book, ages 10 and up]

Caitlin has Asperger’s. Her world is black and white; anything in between confuses her. Caitlin used to depend on her older brother, Devon, for help. But Devon was killed in a school shooting, and Caitlin’s dad is too distraught to help. Caitlin wants everything to go back to the way things were. She comes across the word closure, and she realizes this is what she needs. And in her search for it, Caitlin discovers that the world may not be so black and white after all. [chapter book, ages 9 and up]

When We Collided by Emery Lord

Jonah Daniels takes care of others, his many siblings, and his mother who is deep in depression after losing Jonah’s father. He meets Vivi, an artist and highly imaginative girl. Vivi brightens everyone’s lives, but in her own life, she struggles with bipolar disorder that pulls her into darkness and despair. [young adult with special need bipolar disorder, for ages 14 and up] Sandra Woffington has an MFA in creative writing and an MA in English from Chapman University. Her debut novel, Unveiling, received honorable mention from the Writer’s Digest SP e-book awards. Woffington, who grew up in Bakersfield, California, has lived in Saudi Arabia, London, and Italy. All this laid the groundwork for her thirst for adventure and a desire to understand cultures and people different from herself.  Woffington now resides in southern California, and when she isn’t writing, she’s in front of a classroom at the middle school where she teaches. She also works as a freelance developmental editor and is the mother of three daughters. For more on Woffington, please visit her website and Twitter.