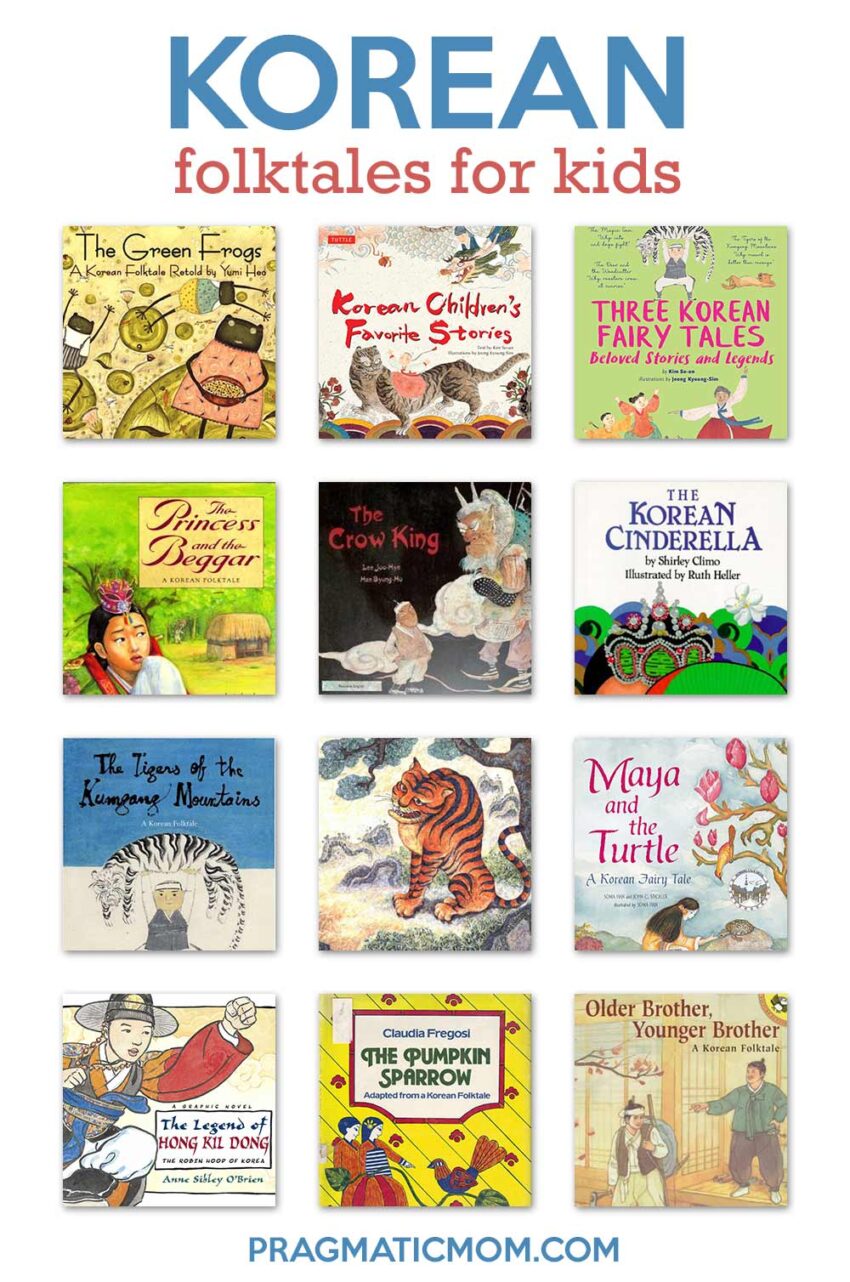 Inside: Take a look at our top selections of Korean folktales for kids — delightful myths and stories to celebrate Korean culture.

I’ve been fortunate to have been gifted with Korean folktale picture book by my Korean mother in law. It’s a nice way to connect my kids with their (one-half) Korean heritage.

They are also one-quarter Chinese and one-quarter Japanese, so I’ll continue with more folktale posts to cover the different aspects of their Asian culture.

Are there any more countries whose folktales you’d like to learn more about? Let me know and I’ll make you a list!

The Green Frogs: A Korean Folktale retold by Yumi Heo

The money raised will go toward continuing the training for her daughter, a competitive figure skater, and for a scholarship fund for students in Korea. Her whimsical illustrations make this funny Korean folktale about two young frogs with Opposition Disorder appealing to kids.

The story of Hungbu and Nolbu is a famous Korean folktale that reflects Confucianism, an ancient Chinese philosophy that stresses filial duty and respect to elders.

The younger brother, who is a good person, is rewarded with magical riches given to him by a swallow that he cared for when its wing was broken. When the older brother tries to duplicate his younger brother’s good fortune, the result is the opposite.

The Pumpkin Sparrow: Adapted from a Korean Folktale by Claudia Fregosi

The story of Hungbu and Nolbu is retold in The Pumpkin Sparrow but with a different ending. Pair with Older Brother, Younger Brother and discuss why folktales of the same story might vary. [picture book, ages 4 and up]

The Legend of Hong Kil Dong: The Robin Hood of Korea by Anne Sibley O’Brien

Try this graphic novel format of a Korean folk story. It’s a classic tale from seventeen century Chosun Korea about an illegitimate boy whose father is a powerful minster, but his mother is a commoner which prevents him from claiming his birthright.

He leaves his home to study with the monks: martial arts, swordplay, the I Ching, and magic. Eventually, he impresses a band of outlaws and becomes their leader. He trains them in fighting arts, and they raid greedy monks and nobility, returning wealth to the peasants who suffered under them.

Righting wrongs catches the attention of the king Se Jong, who eventually listens to his counsel, marking the golden age of Korea with reforms, inventions, and achievements. [graphic novel picture book, ages 6 and up]

The Rabbit and the Dragon King: Based on a Korean Folk Tale by Daniel San Souci, illustrated by Eujin Kim Neilan

What is fun about this Korean folktale is that it references the race between the tortoise and the hare. In this story, a dragon king that lives at the bottom of the ocean feels ill. It also could be that he’s a hypochondriac.

The court magician, a puffer fish, recommends eating the heart of a rabbit as a cure, to give the dragon hope. All the sea creatures are willing to bring back a rabbit, but only the turtle knows what it looks like, as his grandfather beat one in a famous race long ago.

He uses a bit of magic to bring back a rabbit to the dragon king. The rabbit isn’t willing to die and comes up with an alternative solution. This ancient tale dates back to the Shilla Dynasty in A.D. 642.

Maya and the Turtle: A Korean Fair Tale by Soma Han and John C. Stickler, illustrated by Soma Han

I like how this fairy tale weaves in Korean culture from traditional seating and bedding to spiritual beliefs like the changsung totem pole guardians. Maya’s mother has a prophecy dream — a temong dream — that she will one day become a princess. A turtle that she rescues and cares for plays a role in that dream.

In this fairy tale, a giant flying centipede terrorizes a village nearby, attacking the children. Maya offers herself as a sacrifice and uses the money the village offers to buy medicine for her ailing father.

When the flying centipede arrives to take her, her turtle fights it into the night, killing it but also sacrificing itself in the process. Word spreads about her, and the Emperor of Korea wants to meet her. He wants her to meet his son, who is traveling on adventures.

It’s love at first sight with a happily ever after ending. Try this book for kids who like reading about princesses. [picture book, ages 5 and up]

The Tiger and the Dried Persimmon: A Korean Folk Tale retold by Janie Jaehyun Park

In Korea, dried Hichiya persimmons were given to children as a treat. In this folktale, a crying baby is told by its mother to stop crying or a fierce animal will get it.

A tiger, who is about to pounce on the family’s ox, listens, amazed that the baby who won’t stop crying is unafraid of the animals, including itself. Only an animal called “dried persimmon” is fearsome enough to stop the baby from crying.

The tiger is scared of this animal and decides to leave, just as a thief approaches who wants to steal the ox. In a mixup, the thief jumps on the tiger’s back instead.

Kids will find this Korean folktale appealing because of the humor. Use for a book club and let kids try dried persimmon or dehydrate the fruit themselves. [picture book, ages 4 and up]

The Tigers of the Kumgang Mountains: A Korean Folktale by Kim So-un, illustrated by Kyoung-Sim

No one can conquer the tigers of the Kumgang Mountains including a marksman of great skill. His son decides to avenge him but first, he must complete incredible feats of shooting skill before his mother will let him go.

Finally, his skills surpass those of his father and he sets off, but the tigers of Kumgang Mountains are no ordinary animals, and it will take his wits to defeat them. This is a beautifully illustrated picture book of an ancient folktale. [picture book, ages 6 and up]

The Korean Cinderella by Shirley Climo, illustrated by Ruth Heller

This Korean version of Cinderella is similar to the well known Disney version, with magic at work to help the young girl. This story is actually a compilation of three Korean versions but also has the lost shoe element, and the happily ever after. [picture book, ages 4 and up]

The Moles and the Mireuk: A Korean Folktale retold by Holly H. Kwon, illustrated by Woodleigh Hubbard

A Mireuk is a stone Buddha statue, and it resides near a family of moles in a peaceful mountain valley. Papa mole wants to find the perfect groom for his daughter and seeks out the most powerful being in the world: the sky, the clouds, the wind, the Mireuk.

It’s the wise Mireuk who reveals the most powerful being in the universe. It’s the mole who can burrow below the statue and topple it. Papa mole finds just the right young mole in his very neighborhood.

This folktale has whimsical illustrations that obliquely introduces zen Buddhist philosophy that what we seek can be found close to home and that the idea of “power” is not necessarily so obvious. [picture book, ages 4 and up]

Mole’s Daughter: An Adaptation of a Korean Folktale by Julia Gukova

This is another version of The Moles of Mireuk, and makes a nice pairing to compare and contrast how folktales can have different versions and why that might be. [picture book, ages 4 and up]

The Princess and the Beggar by Anne Sibley O’Brien

The youngest princess in Korea was known as the weeping princess for her tender heart. Her father banishes her as the wife of the village beggar, Pabo Ondal, but it’s a blessing in disguise. Here in the mountains, she can study literature and poetry, and teach her husband the arts of being a nobleman.

Together, they have a surprise for her father. There’s a feminist message in this ancient folk tale that is timely today. [picture book, ages 6 and up]

The Chinese Mirror: Adapted from a Korean Folktale by Mirra Ginsburg, illustrated by Margot Zemach

A villager returns from China with a treasure that no one has ever encountered: a pocket mirror. He hides it from his family, taking it out now and then to enjoy its magic. His wife catches wind and sneaks a peek into a mirror.

She sees a pretty young woman and thinks her husband has brought a woman back from China. Each family member looks into the mirror, seeing their reflection but not realizing what it is. This mix up continues until the mirror finally gets destroyed.

This folktale will amuse young readers that something as simple as a mirror could cause such havoc. [picture book, ages 4 and up]

The Crow King by Joo-Hye Lee, illustrated by Byung-Ho Han

The Crow King is an evil monster who kidnaps whoever he wants. When he takes a beautiful bride, her husband swears he will find her even though the journey is perilous and no one has ever survived it. An old woman helps him by giving his rice cakes to use to trick the crows who guard the king.

He reaches his wife, and with a bit of magic, he is able to defeat the Crow King. The illustrations enhance this timeless story of good versus evil. [bilingual Korean English picture book, ages 4 and up]

Thirteen Korean folktales for kids are compiled in this collection of stories for children. Use them for bedtime stories; they are a perfect read aloud. [Korean folktale collection, ages 5 and up]

The Magic Gem tells the ancient reason why cats and dogs fight. The Deer and the Woodcutter explains why roosters crow. The Tigers of Kumgang Mountain is a cautionary folktale about overcoming challenges.

Retold for a modern audience, these three Korean Fairy Tales are as amusing as they were in ancient times. [chapter book, ages 7 and up]

p.s. If reading Korean folk tales has made you interested in everyday life in Korea, try Chi-Hoon: A Korean Girl by Patricia McMahon with photographs by Micheal F. O’Brien. It shows the life of a young girl in Korean. It’s for ages 8 and up.

p.p.s. I have a list of my favorite Korean American books for kids too!