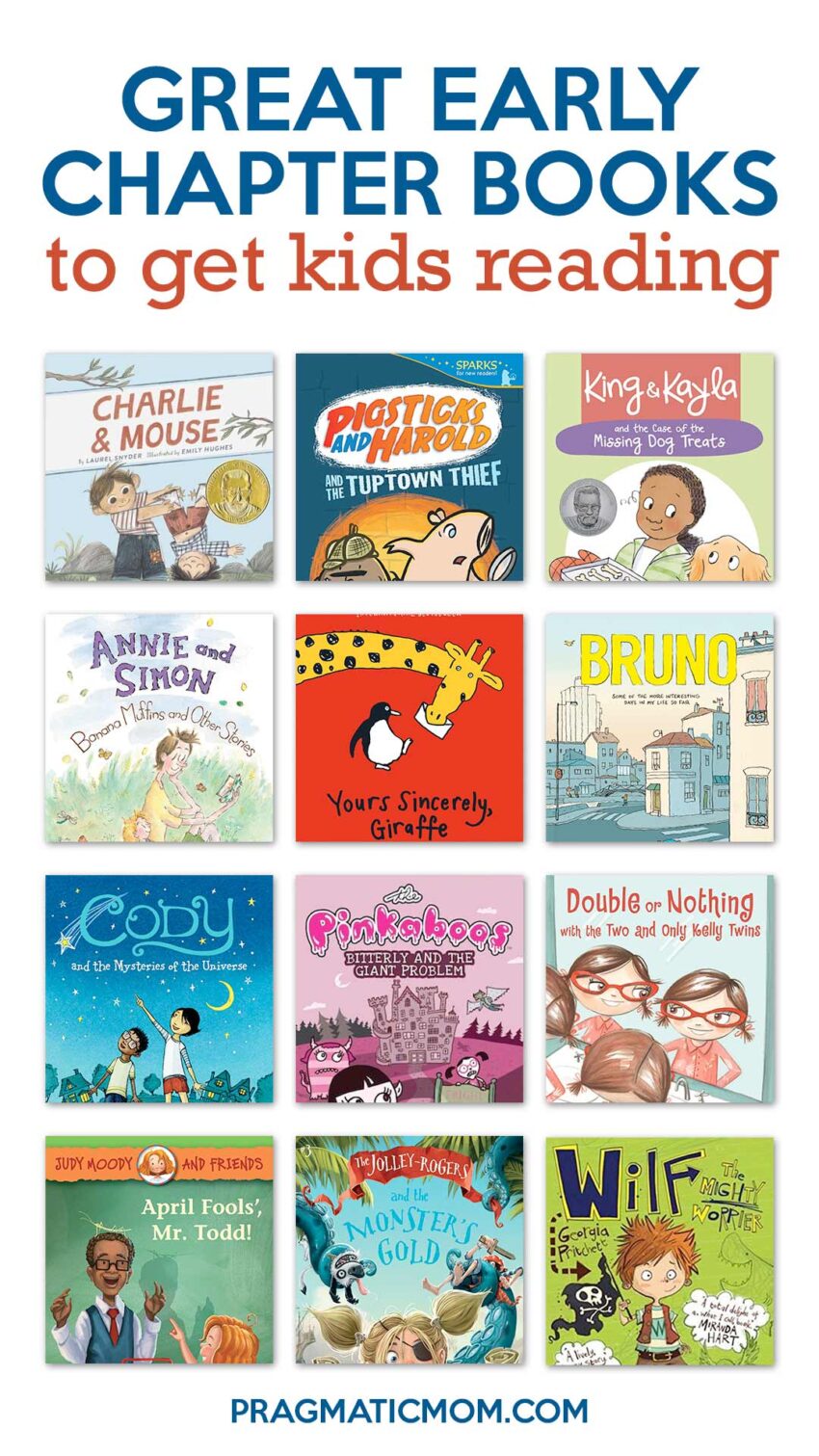 Have you ever tried a “book tasting?” It’s a fun way to get kids reading. You simply get a pile of books and have kids flip through the books, just to sample each one. Chances are that no one will leave empty-handed.

Like baby clothes, Early Chapter Books tend to have a girl or boy appeal. Some like Magic Tree House, A to Z Mysteries, and Bailey School Kids appeal to both just like there are yellow, white, and green infant clothes. I mean, they exist, but there’s just not a ton of them. But I try to judge the audience of the book, as open-minded kids might not care if the character reflects themselves. I put the order of the books in this list by reading level, with the lower level first.

I’m giving away 9 early chapter books to 9 winners. Please fill out the Rafflecopter at the bottom to enter.

This reminds me of the Frog and Toad series by Arnold Lobel but instead of amphibians, it’s about two brothers. It has that same kind of style of conversation and the same kind of gentle adventures but set during modern times. This feels like an instant classic. I’m a huge fan of Frog and Toad and I love this book! Everything about it appeals to me. [early chapter book, ages 4 and up]

I read and loved a Pigsticks and Harold book when I judged the Cybils but I asked for the book to be recategorized from Easy Reader to Early Chapter Book. Here’s the thing: it falls in between. That’s not really an issue for the reader. Pigsticks and Harold books are funny mystery adventures that appeal to kids. Try it with kids ready to leave Easy Readers and make the leap to chapter books. This is the perfect transition series. [early chapter book series, ages 5 and up]

King & Kayla and the Case of the Missing Dog Treats by Dori Hellestand Butler, illustrated by Nancy Meyers

Kayla’s dog King loves peanut butter treats. When she makes a batch and some go missing, he’s falsely accused. Together, dog and girl and friends sleuth to find the culprit. [early chapter book series, ages 5 and up]

Annie and Simon: Banana Muffins and Other Stories by Catharine O’Neill

Henry and Mudge fans will enjoy this gentle early chapter book with domestic sibling adventures. Annie and her much older brother Simon bake muffins, watch a baby while doing laundry, and play at a lake. Simon is that perfect older brother (though with a wider age difference) as Charlie in the Charlie and Lola series. I’d describe this series as a mash-up of Henry and Mudge meets Charlie and Lola. [early chapter book, ages 5 and up]

Yours Sincerely, Giraffe by Megumi Iwasa, illustrated by Jun Takabatake

What happens when a bored giraffe gets a penguin pen pal halfway around the world? It’s hard to imagine someone you’ve never seen. They have delightful conversations to learn about each other such as what is a neck and why do I have one? This book has wide appeal. Try it international bestseller with kids who like animal nonfiction books, kids who ask lots of questions, and kids who like animals. [early chapter book, ages 6 and up]

Bruno: Some of the More Interesting Days in My Life So Far by Catharina Valckx, illustrated by Nicholas Hubsech

Bruno is the cat on the cover who has odd but appealing adventures where the world isn’t acting the way it usually does. Kids will like these quirky stories that have a magical realism feel. My only complaint is that the text is in a very small-sized font but there is very little of it; just two or sentences a page. This reads like a picture book but it’s in chapters. It’s a great transitional early chapter book for those kids (like mine) who want chapter books to prove their reading independence but are still only in first or second grade. [early chapter book, ages 5 and up]

Cody and the Mysteries of the Universe by Tricia Springstubb, illustrated by Eliza Wheeler

I read one of the Cody books as part of judging Early Chapter Books and Easy Readers for the Cybils children’s book competition and I really enjoyed it. Her books are well-written gentle adventures that I would describe as “imagine Henry and Mudge as an Early Chapter Book instead of an Easy Reader.” It has that same kind of gentle friendship vibe with everyday adventures. This book also introduces a diverse character in Cody’s friend Spencer. [early chapter books series, ages 6 and up]

The Pinkaboos: Bitterly and the Giant Problem by Jake and Laura Gosselin, illustrated by Billy Kelly

At Fright School, Bitterly and her two friends learn to chase away the fears of little human girls by entering their dreams. Her little girl is Molly who has bad dreams of a giant who wants her for lunch. When Bitterly gets bullied by a classmate, she finds help from a place she least expects it — the little girl she’s supposed to protect. This is a book for kids who want to read about confronting fear whether in dreams or at school.

In the sequel, Belladonna and the Nightmare Academy, Belladonna also goes up against the school bully who is abusing dream entering by becoming a nightmare. She has to figure out a way for her human girl to stand up to the bully that enters her dreams. [early chapter book series, ages 6 and up]

Double or Nothing with the Two and Only Kelly Twins by Johanna Hurwitz, illustrated by Tuesday Mourning

For anyone who wished they were an identical twin or wondered about how twins are the same and yet different, this is the book for you! It’s not easy to tell Ilene and Irene apart, but if they look identical, why aren’t they exactly the same? There are illustrations on most page spreads, with some pages entirely text. Readers of Bailey Street Kids, Magic Tree House, and A to Z Mysteries will find this book to read at the same level. [early chapter book, ages 6 and up]

I have to admit that though I tried, my kids and I never got into the popular Judy Moody series. She was just a little too high maintenance for us to deal with. This series, Judy Moody and Friends, seems to be one level down from the Judy Moody series in that there is less text per page and more illustrations. The illustrations are also in color. [early chapter book, ages 5 and up]

The Jolley-Rogers and the Monster’s Gold by Jonny Duddle

Jim and Matilda are fellow pirates in search of gold with the help of a treasure map. They set off on the Jolly-Rogers’ ship, The Blackhole, on an adventure that includes fierce monkeys, parrots, and a monster. Readers who loved to play pirates will relish this series. [early chapter book series, ages 6 and up]

Wilf the Mighty Worrier Battles a Pirate by Georgia Pritchett

Readers who like Diary of a Wimpy Kid should try Wilf. It has the same humor around a relatable boy character. In this case, Wilf has a lot of anxieties that he has to face in order to stop the evil genius boy next door from destroying the planet. This book also has a pirate theme so pair it with The Jolley-Rogers and the Monster’s Gold if you have a pirate adventure-loving kid. [early chapter book, ages 6 and up]

Princess Cora and the Crocodile by Laura Amy Schlitz, illustrated by Brian Floca

Detective Gordon: A Case in Any Case by Ulf Nilsson, illustrated by Gittespee

Shaun the Sheep: Tales from Mossy Bottom Farm, Blast to the Past by Martin Howard, illustrated by Andy Janes

This is the kind of early chapter book that I’d hand to an advanced reader or a kid who loves to read. Those kids who might like British history — and at ages 6 through 8 there might be but a handful — will like this book. For others, it might be daunting to “translate” Brit colloquial English. The other audience for this book might be an older elementary school student — 4th or 5th grade — who likes period books. I’m not quite sure who will actually read this book. The illustrations are appealing but it feels high for an early chapter book in the United States. It might do better in the U.K. [early chapter book, ages 6 and up] Please fill out the Rafflecopter below. I will randomly select a book to each of the nine winners. I can only ship to U.S. addresses due to high cost of shipping. 22 thoughts on “New Early Chapter Books to Get Kids Reading”