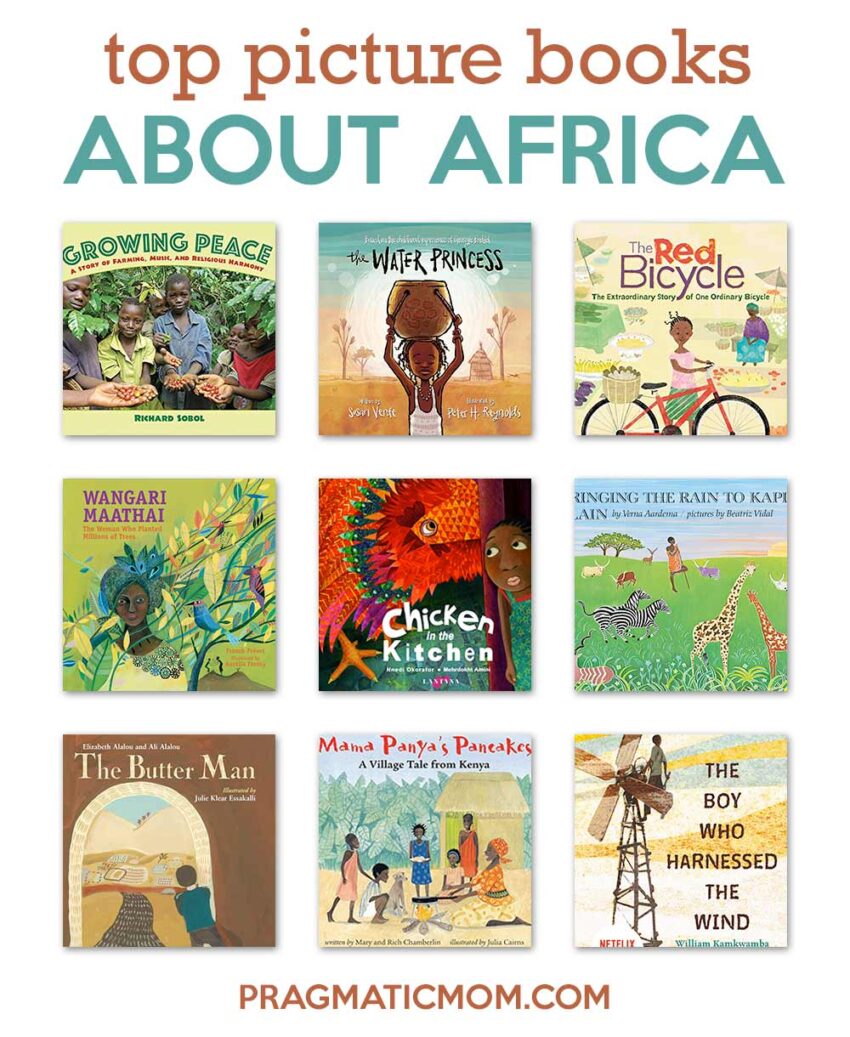 This new list highlights seemingly ordinary people who find ways to help people in extraordinary ways. Other books on this list showcase empathy and helping others. It is my hope that this list inspires kids that they can change the world. In Kenya, Kimeli comes home to his Maasai village after studying abroad. He has something important to discuss with his village elders. He remembers 9/11 and the suffering in New York. To the Maasai, the cow is life. Kimeli offers his only cow Enkarûs; others join him in this ultimate sacrifice. Together they gift fourteen precious cows for America “because there is no nation so powerful that it cannot be wounded, nor a people so small that they cannot offer mighty comfort.” This is based on the true story of Kimeli Naiyomah. [picture book, ages 5 and up]

9. Growing Peace: A Story of Farming, Music, and Religious Harmony by Richard Sobol

In a village in Uganda, farmers work together at a coffee growers co-op called Peace Kawomera (Delicious Peace). What is unusual is this is an interfaith farming cooperative with Christians, Jews, and Muslims all working together.

Not too long ago, Uganda had a series of civil wars, and people of all religions faced persecution. When Ugandan musician, J. J. Keki visited the United States, he witnessed the 9/11 terrorist attack, and it prompted him to start this farming co-op. As of 2016, there were more than 1,000 farmers growing and selling their coffee collectively through Peace Kawomera. [advanced nonfiction picture book, ages 7 and up]

This story is based on supermodel Georgie Badiel’s childhood in Burkina Faso, where water has to be collected miles away and carried back on the heads of the women and girls. The heroine in her story, Princess Gie Gie, dreams of the day when her village will have cool, crystal-clear water of its own. [picture book, ages 4 and up] The backstory of this picture book is the chance meeting between Peter H. Reynolds (The Dot, The Museum) and model/activist Georgie Badiel at the Women in the World Summit in New York City. He suggested that she meet with his Museum collaborator, author Susan Verde, and the trio brought her story to life. Georgie Badiel started a foundation to provide clean water to the people of Burkina Faso and Africa, including digging wells, restoring wells, and supporting education for women and children.

7. The Red Bicycle: The Extraordinary Story of One Ordinary Bicycle by Jude Isabella, illustrated by Simone Shin

Leo in America has worked hard to earn a bicycle he names Big Red. Now that his bike is too small for him, he decides to donate it to a country that really needs it. Big Red ends up in Ghana where a young girl, Alisetta, uses it to help her family bring crops to the market. When Big Red’s spokes break from a runaway pig, she donates it to a local medical clinic where it’s turned into an ambulance bike. The gift of a red bike from America has a new life, helping others in Africa. [picture book, ages 8 and up]

Interested in donating a bicycle too? Check out Bicycles for Humanity.

6. Wangari Maathai: The Woman Who Planted Millions of Trees by Franck Prévot, illustrated by Aurélia Fronty In the shade of the big mugumo, her mother teaches her that a tree is worth more than its wood, an expression that Wangari never forgets.

In Kenya, the British colonists grow rich by cutting down trees to plant tea. Wangari witnesses the destruction of the trees as a child, and returns from education abroad to find that this practice has changed the ecology. Wild animals are rare now, food-growing farms scarce, and the rivers are muddy from erosion.

She creates the Green Belt Movement to reforest her country, recruiting women to help. It’s dangerous to oppose the government officials who have made fortunes from razing forests, but Wangari is not deterred. Her trees help to build bridges between tribes, and she becomes the assistant minister of the environment, after helping to bring down President Daniel Arap Moi. Wangari Maathai received the Nobel Peace Prize in 2004. [picture book biography, ages 6 and up]

5. Chicken in the Kitchen by Nnedi Okorafor, illustrated by Mehrdokht Amini

This picture book reads like a charming African folk tale but it’s set in modern-day Nigeria. When Anyaugo wakes up in the middle of the night, she finds a giant chicken in her kitchen and fears for the cooking her mom and aunts have done for the New Yam Festival tomorrow. Is this a friendly chicken, and how does she get rid of it? [picture book, ages 4 and up]

4. Bringing the Rain to Kapiti Plain by Verna Aardema, illustrated by Beatriz Vidal

This rhyming story shows the dependence of all the creatures living in the Kapiti Plain on the rain. Without the rain, the grass turns brown, and the cows are hungry and dry. It falls to Ki-pat the herd boy to change the weather, which he does with the help of an eagle’s feather. His shot pierces the storm cloud, releasing the rain. Referencing this picture book can help kids understand famine in Africa. [picture book, ages 4 and up]

While Nora waits for her father to prepare couscous for dinner, she tells him that she’s starving. He wants her to save her appetite for dinner so he tells her a story about his childhood when there was famine in Northern Morocco. His family had to sell the cow which gave them milk and butter and his father had to leave them in search of work.

When he asked for butter, his mother told him to wait for the butter man (a merchant who walked through their area) to ask for a bit of butter. The butter man never came, but soon his father returned with flour, vegetables, and meat, and eventually, his family was able to buy a new cow that gave them butter.

This picture book tells the story of the Bergers or Imazighen, the native people of North Africa. [advanced picture book, ages 6 and up]

As Mama Panya and her young son Adika walk to market, he invites all the friends he meets to share in their pancakes at dinner. Mama Panya worries how she will feed a crowd with just money enough for food for the two of them. This is a heartwarming story about sharing and the rewards that it brings creating community. The back matter pages have more information about life in Kenya, plants and animals Adika and Mama Panya saw on the way to market, and how to speak Kiswahiki. Mama Panya’s pancake recipe is also included! [picture book, ages 4 and up]

1. The Boy Who Harnessed the Wind by William Kamkwamba and Bryan Mealer, illustrated by Anna Hymas

In William’s village in Malawi, there is no money for lights, and a drought throws the country into famine. William’s family can’t afford his school fees, or even more than one meal a day. At age 14 with free time on his hands, he goes to the library, a gift from the Americans, where he finds books on machines including a windmill. He gets the idea to build it to bring up water from below ground and makes it from trash: a tractor fan, shock absorber, broken bicycle, and plastic pipes. This is a true story. William studied at Dartmouth and returned to Malawi to work on renewable energy for electricity and pumping water. [picture book, ages 6 and up] 10 thoughts on “10 Picture Books About Africa That Teach Empathy”