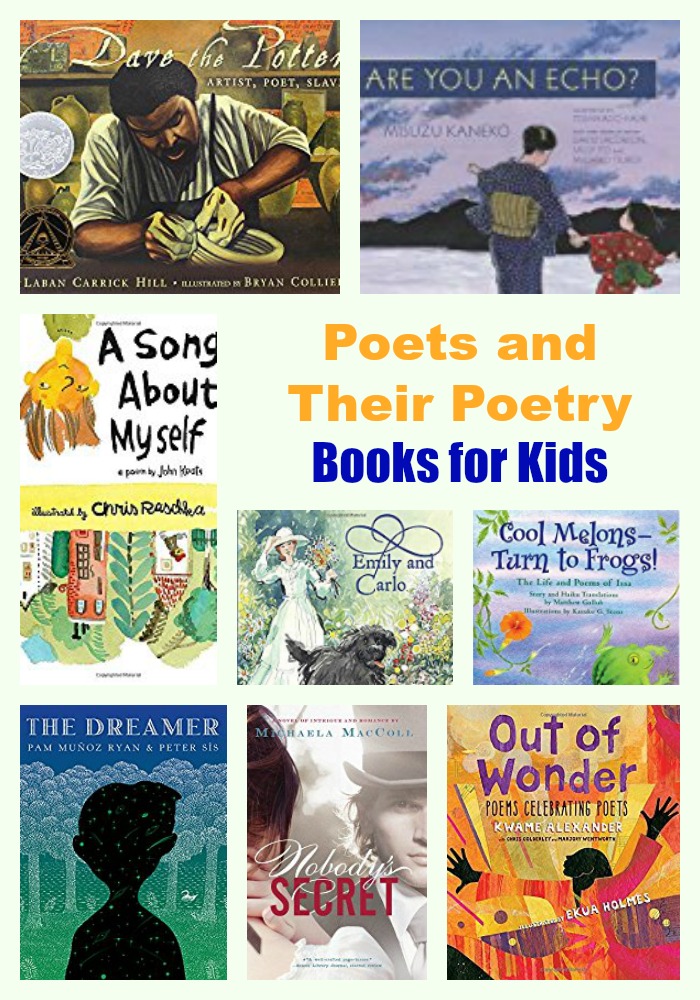 I had trouble relating and connecting to poetry. It seemed off putting and too difficult. But then I realized that poetry is very personal and getting to know the poet helps to view in the poetry in a whole new light. I really find that I connect more with poetry once I get to know them a little. These are the books that helped me learn about poets and their poetry.

Poets and Their Poetry Books for Kids

There was so much that I misunderstood about William Carlos Williams before I read this sensitive and wonderful picture book by local Wellesley librarian and author Lisa Rogers. I only knew his “eating the plums in the icebox poem” and I thought of him as that poet with the two same names: Williams Williams (if you remove his middle name). But Lisa Roger’s book showed me an entirely different side of a kind and gentle local doctor who looked after his neighbors in big and little ways. He noticed details of what affected their lives. His red wheelbarrow poem is a testament to his neighbor’s industry and value as a member of his family and of the community. This picture book made me love William Carlos Williams, the poet who scribbled poems on his prescription pads. Perhaps he became a doctor for a reliable career, rather than try to make a living as a poet. But I can view him in my mind’s eye squeezing in time to jot down the poems as they bubbled up in his brain. Perhaps the humanity of his poetry stems from his work as a small-town doctor? This is one of my favorite picture books from 2019. [picture book, ages 4 and up]

Are You An Echo?: The Lost Poetry of Misuzu Kaneko by David Jacobson, Sally Ito and Michiko Tsuboi who wrote the narrative and did the translation, illustrated by Toshikado Hajiri

All Japanese children read her deeply compassionate poems about creatures in the natural world. Think of her as a Japanese Pablo Neruda and/or Emily Dickerson. Her sad, short life is depicted in this biography/poetry hybrid picture book. This combo really works for me since she is unfamiliar to most of us. Her poems are deceptively simple and kids can really relate to them. I hope this wins a Caldecott but I hesitate to add it to my watch list because the rendering of the faces in the illustrations were too cartoon-y and didn’t go with the rest of the illustration style. [biography and poetry picture book hybrid, ages 4 and up]

Out of Wonder: Poems Celebrating Poets by Kwame Alexander with Chris Colderley and Marjory Wentworth, illustrated by Ekua Holmes

This is Kwame’s personal favorite collection of poets with original poems created by himself, Chris, and Marjory in the style of each poet. “Poems come out of wonder, not by knowing.” Lucille Clifton. Kwame invites you and your kids to discover the joy of poetry, and to perhaps come up with a poem of your own. [picture book, ages 8 and up]

Dave the Potter is a puzzle to unwind. A slave living in South Caroline during the 1800s, he wrote enigmatic poems into the pottery that he crafted. Born into slavery, Dave worked as a potter in a factory while he was still in his teens making stoneware vessels. It is on these vessels that Dave would inscribe short rhyming poems. This is remarkable given that slaves were forced into illiteracy and South Carolina passed a harsh anti-literacy law shortly after Dave’s first poem was published on a pot in 1834. Poetry thrives even in inhospitable climates, and because his artistry with clay, Dave the Potter’s life story and creative talents endure for posterity. [picture book, ages 5 and up]

A Song About Myself: A Poem by John Keats illustrated by Chris Raschka

Try this light-hearted poem that John Keats wrote for his sister for National Poetry Month. It’s about a naughty boy on a walking adventure. Keats himself was hiking twenty miles in Scotland at the time, and this poem was a scribble he sent to amuse his sister. He was just 22 years old and died three years later. [picture book, ages 6 and up]

At age nineteen, Emily Dickinson’s siblings were off at school so she was lonely. Her father solved this problem with a Newfoundland puppy that she named Carlo. Her was her “shaggy ally,” and the subject of some of her poems. He was her dog for sixteen years; when he passed away, she never got a new one. Her faithful companion lives on in her poetry, and snippets of these poems are embedded into this picture book. [picture book, ages 5 and up]

For another Emily Dickinson poetry book, try Poetry for Kids Emily Dickinson, edited by Susan Snively, illustrated by Christine Davieier. It pairs nicely with Are You An Echo?

On Wings of Words: The Extraordinary Life of Emily Dickinson by Jennifer Berne, illustrated by Becca Stadtlander

Jennifer Berne unravels Emily Dickinson’s poems by delving into Emily’s life as a sensitive and inquisitive girl who was not allowed to search for answers. Poetry became her way to examine and make sense of the world. And poetry was also her everyday way of capturing daily moments. I loved how Berne matched up parts of Emily Dickinson’s poems with small moments in her life. It’s easy to view her as this odd housebound person, but On Wings of Words shows us another side of a woman born ahead of her time. [picture book, ages 5 and up]

This is a fictionalized account of young Emily Dickenson’s life at age fifteen, but nobody can make historical fiction more riveting than Michaela MacColl, even if a character is added for a love interest. I like how her book humanizes Emily as a young, inquisitive girl rather than an odd recluse. There’s intrigue, flirtation, and murder in this book … and it’s up to Emily to unravel the mystery. [chapter book, age 12 and up]

Cool Melons – Turn to Frogs! The Life and Poems of Issa by Matthew Gollub, illustrated by Kazuko G. Stone

Learn about Haiku through the poems of celebrated Japanese poet Issa who was born in 1763. Japanese school children all study Issa the way American children learn about Robert Frost. Issa’s poetry reflects his love of the natural world, much like Misuzu Kaneko.

The Dreamer by Pam Muñoz Ryan, illustrated by Peter Sis

This, her latest work, is about Paul Neruda, the 1971 Nobel Laureate for Literature.  Neruda, who was born and raised in Chile, is considered one of the most important literary poets of the twentieth century but is also known as the poet of the people because of his ability to connect his poetry in ways that everyday people could relate to.  He is also considered the most widely read poet in the world.

Paul Neruda’s childhood is the focal point of Ryan’s fictionalized novel.  With regard to passion, Paul’s interest and gift for words were not embraced by his domineering and controlling father.  His brother’s gift for classical voice was also rejected by their father in an effort to steer his sons into careers in engineering or medicine.  Neruda’s mother died when he was very young, and the novel seems to indicate that they were similar in spirit. [chapter book, ages 9 and up]

p.s. Here’s another great post about books about poets. 14 thoughts on “Poets and Their Poetry Books for Kids”