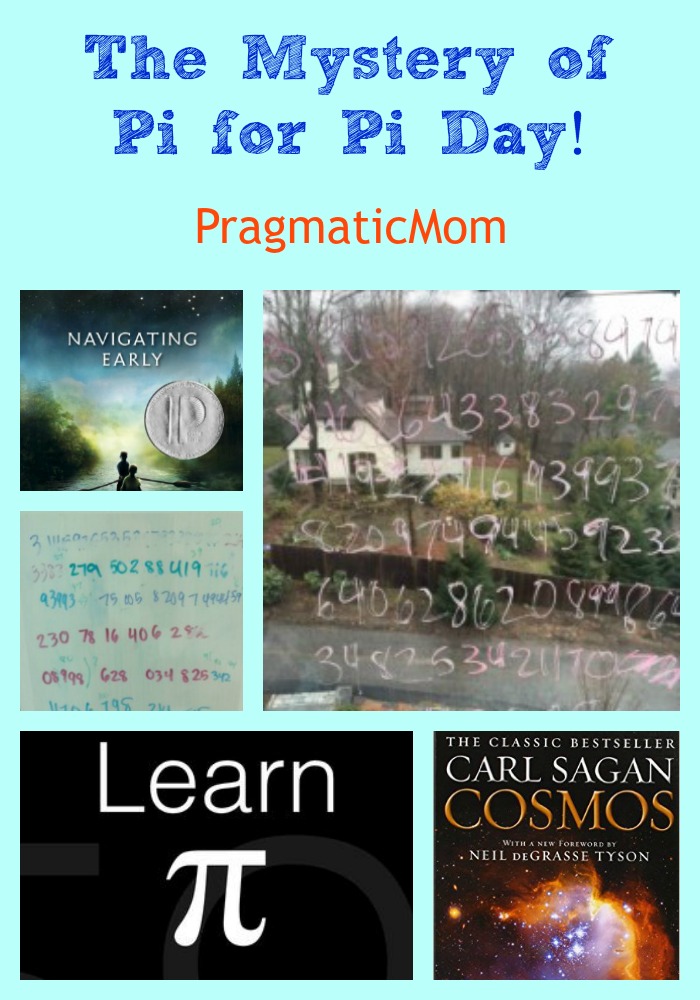 What do you get if you divide the circumference of a jack-o’-lantern by its diameter? Pumpkin π. Joke from comedian John Evans from 50 Interesting Facts About Pi Al-Khwarizmi, who lived in Baghdad around A.D. 800, worked on a value of pi calculated to four digits: 3.1416. The term “algorithm” derives from his name, and his text Kitab al-Jabr wal-Muqabala (The Book of Completion Concerning Calculating by Transposition and Reduction) gives us the word “algebra” (from al-Jabr, which means “completion” or “restoration”). from 50 Interesting Facts About Pi

Her goal was to learn 40 digits a day, thus mastering 100 in three days. She used an app — Learn Pi Free —  to help her. She sang the numbers. She recited the numbers. And she wrote down the digits of Pi … everywhere! Ludolph van Ceulen (1540-1610) spent most of his life calculating the first 36 digits of pi (which were named the Ludolphine Number). According to legend, these numbers were engraved on his now lost tombstone. from 50 Interesting Facts About Pi

She used Chalk Ink on her sister’s window. In 2002, a Japanese scientist found 1.24 trillion digits of pi using a powerful computer called the Hitachi SR 8000, breaking all previous records. from 50 Interesting Facts About Pi

She used white board markers on a Think Board (it’s a peel and stick dry erase sheet) that she put on her desk hutch too. I noticed that she tried to find patterns in the number groupings which reminded me of Clare Vanderpool’s chapter book Navigating Early in which a young boy, Early, was convinced that there was a story in the numbers of Pi.

Scientists in Carl Sagan’s novel Contact are able to unravel enough of pi to find hidden messages from the creators of the human race, allowing humans to access deeper levels of universal awareness. from 50 Interesting Facts About Pi

Carl Sagan’s Cosmos also has a story line of finding a message coded in the numbers of Pi. Could it be that there is more to Pi than the ratio of a circle’s circumference to its diameter?

After her three days of extensive study, I asked her how her extra credit test went. She said that her teacher only asked for 10 or 15 units of Pi, but that she decided to challenge herself to learn 100.

How about you? Any interest in looking into the mysteries of Pi?

p.s. Can you find your birthday in Pi? Search for it here.