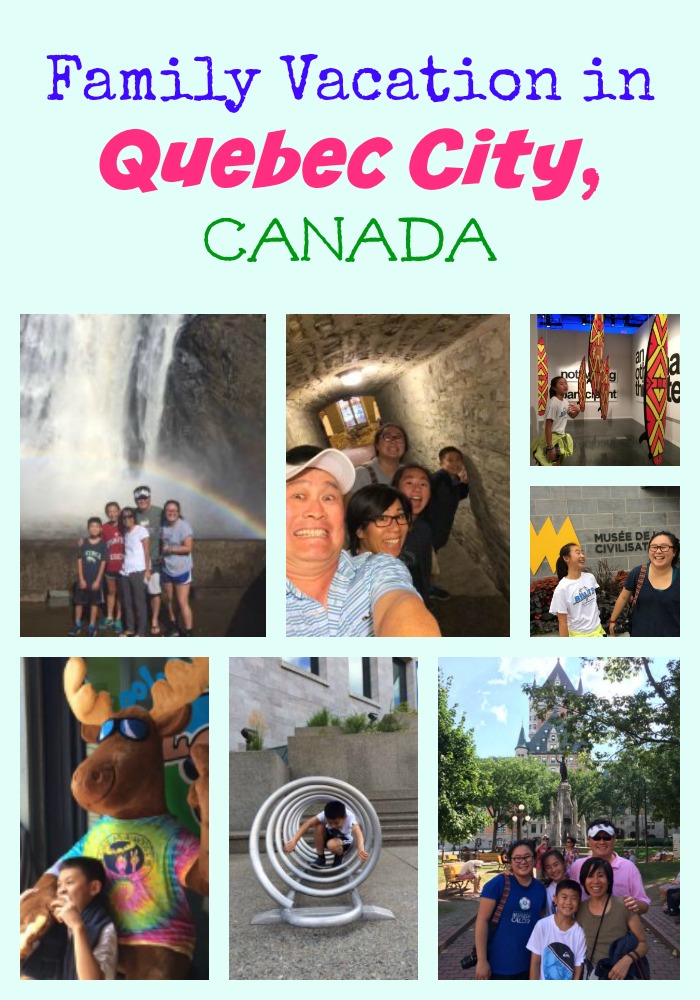 Our short but sweet driving vacation to Quebec City was a lot of fun. We always have a great time in Canada so much so that our youngest wants to move there someday. I did some research to supplement my husband’s guide-book to plan our family vacation to Quebec City. I had earmarked: Aquarium du Quebec, Old City, Musee National des Beaux-Arts du Quebec, Montmorency Falls, Samuel Champlain Walkway, and The Battlefields Park: Abraham’s Bus and the Odyssey experience at the Plains of Abraham. We didn’t really follow my plan as my kids rebelled at the thought of a tour bus to catch the sites, and didn’t want to see anything historical. Luckily the city is imbued with character and history. Instead, my kids were motivated by their love of crepes, gelato, and hands-on activities.

What to Do in Quebec City With Kids

Aquarium du Quebec: As predicted, my kids wanted to go the aquarium out of all the possibilities presented, so we drove to the Aquarium, about a 15-minute drive to the outskirts of the city. At first, it seemed like a great aquarium because it’s an outside venue with winding pathways and exhibits spread out amongst the grounds. Because my kids had been to Monterey Bay Aquarium, Aquarium of the Pacific, and Boston’s New England Aquarium, they are picky. The fish tanks focus on freshwater fish which makes sense for a city on a major river, but these fish are not as colorful. Still, there are reef fish tanks, jellyfish, and seahorses, as well as hands-on touching pools. What ruined the experience for my kids was the outdoor zoo part that housed polar bears, seals, walruses and a few birds. They felt that the enclosures were old-fashioned and not natural enough. They objected to the size of that the animals had to swim in. Verdict: my kids don’t recommend it but it’s nice for younger kids without such strong political views, especially if the weather is comfortable. 2/4 It was so great that we went twice. It also includes elements of many museums including art, history, and hands-on children’s exhibits so there is something for everyone. Verdict: my kids highly recommend it. 4/4

Frontenac (Old City): We opted not to take horse-drawn carriage rides and walked around instead. We were focused on retrieving the camera of a reader who accidentally left it behind in a restaurant. Our first stop was this restaurant, which seemed great but was really busy. The manager, Jimmy, knew exactly who we were and where the camera was so it felt like a small miracle to get the camera without a hitch. We spent more time wandering the shops which definitely have a tourist bent to them. We were too lazy to walk up from our hotel to the Frontenac, taking a short tram, the Funiculaire, instead of both ways. Verdict: my kids would say that you have to experience the walled city but it’s a tourist trap. I would recommend visiting the Parliament building or something more educational, rather than just wandering around like we did. It would be a better experience that way. 2.5/4 ( but it could have been a 3/4).

Montmorency Falls: We saw the falls on our way out of Quebec City, getting there early when there were no crowds. The timing was perfect. I’d heard mixed reviews of this falls, with recommendations to see Ste. Anne Canyon instead which is supposed to be better. Montmorency Falls is closer to Quebec City where we stayed though, and, as a quick pit stop as opposed to a half day hike, it’s set up for short and sweet. We did this in flip-flops but you can go in running shoes or hiking boots and make a day of it. There are many options to see the Falls, some more expensive and/or more rigorous than others. We opted for an easy walk to the falls with no elevation changes and opted not to pay extra beyond the admission ticket. Still, we thought this was worth the time for the photo ops! Verdict: 4/4

Where to Stay: We stayed at an upscale hotel in Quebec’s Lower town called Auberge Saint Antoine Hotel. Even if you don’t stay here, pop over to see the archaeological discoveries from the site that on display throughout the hotel. The old parking lot that is now the new hotel was a treasure trove of historical artifacts. The hotel is next door to the Musée de la Civilisation and is a close walking distance to Frontenac and restaurants. 8 Rue Saint Antoine, Ville de Québec. Verdict: 4/4

Where to Eat: Our favorite restaurant for dinner was a short walk down the street. We ate here twice because we liked it so much. L’Échaudé. For being an upscale French bistro, this restaurant was amazingly child-friendly. Although my kids ordered off of the regular menu, the wait staff offered kid-friendly entrees off the menu. The food and service are excellent. The menu ambitious and varied. This was an excellent dining experience!73 Rue du Sault-au-Matelot, Ville de Québec. Verdict: 4/4 Café Bistro du Cap. They are known for their crepes but they only serve them at lunch and try as we might, we missed it. We went for dinner and the food was good and very reasonably priced, but we liked the restaurant next door better. 67 Rue du Sault-au-Matelot, Ville de Québec. Verdict: 3/4 Casse-Crêpe Breton. My son’s only request at Frontenac was to have a crepe. There is a crepe stand which looked terrific but didn’t offer fresh fruit crêpes. The crepe stand owner suggested that we go down the street here instead. At first glance, it seemed like a tourist trap, but we were able to eat on an outdoor shaded patio while live music played, and have decent crêpes and poutine. You can’t beat that! 1136 Rue Saint-Jean, Ville de Québec. Verdict: 3/4 Panache. There’s a fancy restaurant in our hotel, Auberge Saint Antoine, which seemed very expensive. We tried it for breakfast one morning after seeing a review on our hotel television called Million Dollar Review in which our hotel restaurant was featured for dinner. My kids complained that it seemed overpriced for what you got. It was a little too fancy for us. 10 Rue Saint Antoine, Ville de Québec. Verdict: 2/4 Buffet de L’Antiquaire. For a quick but hearty Canadian breakfast, this is a well priced and efficient option. Breakfast is served all day. 95 Rue Saint Paul, Québec City. Verdict: 3/4

Paillard. We stopped in here to pick up Dee’s camera when we were in Frontanac and the place was hopping. It’s in the Old Quarter and makes a great stop on its own. They have pastries and croissants, quick service sandwiches and soups, and gelato. If the lines weren’t so long, we would have stopped for a snack. It looks like a great place for lunch, but we timed it when we weren’t hungry. It’s a well priced option and very child friendly with a cafeteria-style layout. 1097 Rue Saint-Jean, Ville de Québec. Verdict: 3/4 The guidebook that we used (and saw in other tourists hands) is Moon’s Quebec City. For a small city, there’s enough to do that a guidebook is helpful.