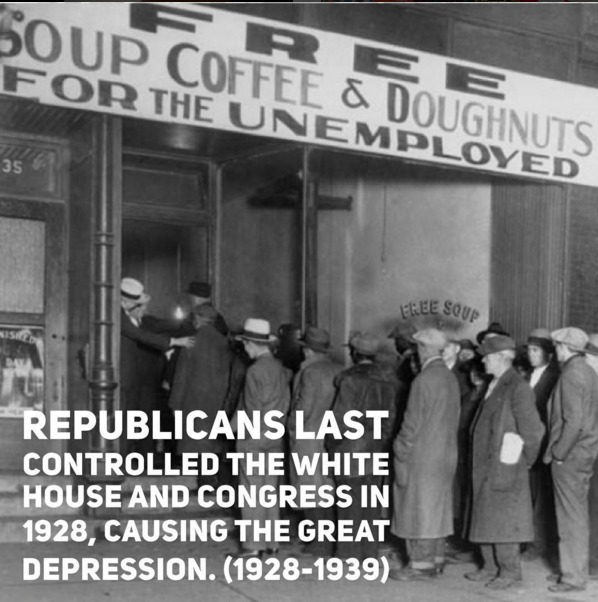 My fourteen year old was concerned about the Republican controlled government so she looked it up and found this: Republicans last controlled the White House and Congress in 1928, causing the Great Depression. (1928-1939). I posted on this on my Instagram and one of my followers, HomeSchoolLiving, corrected me.

“Actually, the last time Republicans controlled Congress and the Presidency was in 2005-2006. Now, before you say we had a recession then, too, you have to understand that the reason for that recession was due to the collapse of the housing market which came about due to mortgage bundling and sell offs and 110% financing opportunities to people who couldn’t afford the homes they were buying…all thanks to a Democratic Congress and President enacting legislation causing the collapse. As for the Great Depression, it was caused by a stock market crash that was set in motion in part due to the global devastation of World War I. Recessions and Depressions don’t happen due to a certain political party being in office, necessarily; they take years of snowballing screw ups to occur. History – read it, study it; don’t MEME it. Finally, for all of the political rhetoric occurring now, why not wait until the President-elect is in office? Complain when he’s actually done something to complain about.” She’s right about Republicans controlling Congress and the Presidency after The Great Depression, so I made this correction to my Instagram post:

Correction: the Republicans also controlled the White House and Congress for two years (2005-2006) under George W. Bush. His government is credited for causing this last Great Recession. Both financial disasters are rooted in the deregulation of America’s financial institutions.

Still, I respectfully disagree with her on the root causes of The Great Depression and The Great Recession which I lay out below.

What Caused The Great Depression?

But then I dug deeper on the root causes of The Great Depression. This is from text book by two professors of economics:

“In fact, only the government had the resources and institutions to stop the Great Depression. Mistake number one occurred during the 1920s, when the government allowed stock prices to rise to dizzying heights. (The Dow Jones Industrial Average started the decade at 108.76, dropped to the around 60, then began a slow climb to 200 by the end of 1927. It hit 300 by the end of 1928 and 350 by August 1929.) [2] By slowly raising interest rates beginning in, say, mid-1928, the Federal Reserve could have deflated the asset bubble before it grew to enormous proportions and burst in 1929.

Mistake number two occurred after the crash, in late 1929 and 1930, when the Federal Reserve raised interest rates. The government’s third mistake was its banking policy. As described in Chapter 10 “Innovation and Structure in Banking and Finance”, the United States was home to tens of thousands of tiny unit banks that simply were not large or diversified enough to ride out the depression. If a factory or other major employer succumbed, the local bank too was doomed. Depositors understood this, so at the first sign of trouble they ran on their banks, pulling out their deposits before they went under. Their actions guaranteed that their banks would indeed fail. Meanwhile, across the border in Canada, which was home to a few large and highly diversified banks, few bank disturbances took place. California also weathered the Great Depression relatively well, in part because its banks, which freely branched throughout the large state, enjoyed relatively well-diversified assets and hence avoided the worst of the bank crises.

The government’s fourth failure was to raise tariffs in a misguided attempt to “beggar thy neighbor.” What Caused The Great Recession?

“From the start, Bush embraced a governing philosophy of deregulation. That trickled down to federal oversight agencies, which in turn eased off on banks and mortgage brokers. Bush did push early on for tighter controls over Fannie Mae and Freddie Mac, but he failed to move Congress. After the Enron scandal, Bush backed and signed the aggressively regulatory Sarbanes-Oxley Act. But SEC head William Donaldson tried to boost regulation of mutual and hedge funds, he was blocked by Bush’s advisers at the White House as well as other powerful Republicans and quit. Plus, let’s face it, the meltdown happened on Bush’s watch.” Will Trump’s Republican Controlled Government Cause a New Recession?

My point is that there are external forces on the economy that the government has no control over, but how the government RESPONDS determines the extent of the crisis. Deregulation of banking: bad. Tariffs on trade: bad.

Controlling the rate of economy growth has but a few levers: setting interest rate and how much money we print. This is all our government. This will be in the hands of Trump and the Republican Party. If it goes south, they will blame Obama but let’s at least agree that 4.9 percent unemployment is a good place to be and the economy has been adding jobs on Obama’s watch.

How Is Our Economy Doing Now?

Average unemployment rate by year from The Bureau of Labor Statistics.

Some of my Instagram followers rightly point out that it’s not just the unemployment numbers but our national debt.

This is true, but how much were the wars in Iraq and Afghanistan a factor? Wars that President Obama inherited from George W. Bush?

Study: Iraq, Afghan war costs to top $4 trillion. The U.S. wars in Afghanistan and Iraq will cost taxpayers $4 trillion to $6 trillion, taking into account the medical care of wounded veterans and expensive repairs to a force depleted by more than a decade of fighting, according to a new study by a Harvard researcher. Mar 28, 2013 from The Washington Post

Did you notice how the increase in the national debt can be largely attributed to the cost of the U.S. wars in Afghanistan and Iraq?

The question remains of whether or not Republicans cause recessions. The Dot.com bubble recession during roughly 1995–2001 was a non-partisan recession. The collapse of the bubble took place during 1999–2001.

Here’s what I think: free market economics works really well because it assumes that all participants are trying to maximize their own gain. It works because this is generally true. But banking institutions need firm controls as they are greedy. Deregulation of financial institutions were the root cause of both The Great Depression and The Great Recession. If we learn from history, we can avoid this during Trump’s presidency.

There are plenty of things to worry about during a Trump Presidency and Republican controlled government. If you are worried about this too, here are non-profits to support:

Planned Parenthood (I donated in Mike Pence’s name and he’s going to get a certificate from them for my donation!)

Worried About Our Environment and Global Warming? Support:

Worried about Combatting the Rise in Racism? Support:

Worried About Freedom of the Press? Support:

8 thoughts on “Republicans Cause Recessions?”