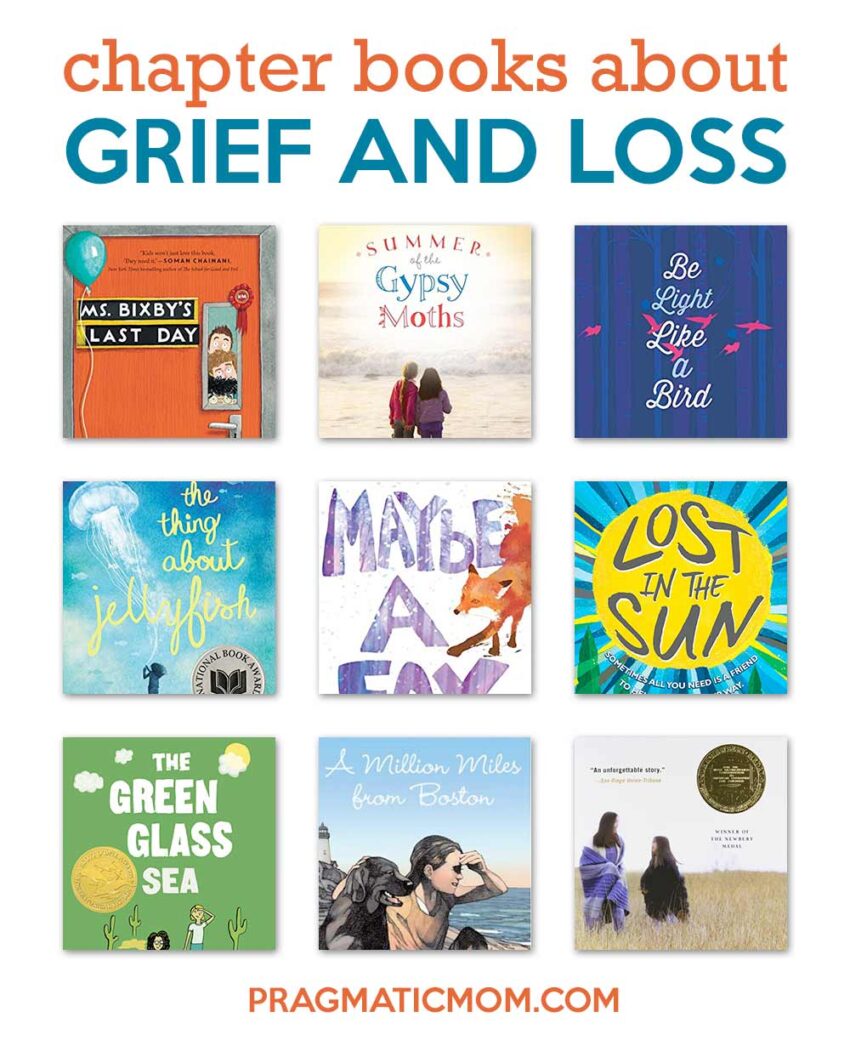 Loss of a parent or a friend is difficult at any age, but perhaps middle school is the toughest age to go through this. In celebration of Be Light Like a Bird by Monika Schroeder’s book about grief and loss, we have put together a list of ten books in which the protagonist suffers from loss and grief but ultimately emerges from this experience with a sense of hope and resilience.

We are also giving away a copy of Be Light Like a Bird. Please fill out the Rafflecopter at the bottom to enter.

How about you? What books about grief and loss do you recommend? Thanks for sharing!

I posted on this book on my Instagram and there’s a lot of feedback on the book there as well: This is just so good! If you liked Wonder by R. J. Palacio, you will love Ms. Bixby’s Last Day by John David Anderson. It has the same emotional wallop but with a different theme. This is about a teacher who quietly changes lives via three of her students (of many more) that she affects. [middle grade, ages 8 and up]

Summer of the Gypsy Moths by Sara Pennypacker

It’s a complicated relationship between two foster girls living in the same house. 11-year-old Stella loves her great-aunt Louise’s house and is living there because her mom is unreliable. Great-Aunt Louise has also taken in another foster child, Angel. If that’s not complicated enough, Great-Aunt Louise passes away and now the girls must find a way to work together in order to live at her house until Stella’s mom can be found and brought in to help. [middle grade, ages 8 and up]

12-year-old Wren is grieving after the death of her father, but her life only gets more difficult when her mom decides to start a new life, moving them from the only home she’s known. In this new environment, Wren is bullied and must rebuild the pieces of her life, including facing her past and forgiving those closest to her. Through loss, Wren also finds hope and a new path to forge for the future. [middle grade, ages 8 and up]

The Thing About Jellyfish by Ali Benjamin

Capturing the angst of coming of age, The Thing About Jellyfish is a story of the politics of middle school girl friendships and the pain caused by shifts in order to upgrade to a more popular strata. In this case, Suzy can’t accept that her best friend drowned, and has an alternate theory that she decides to prove by setting off into the world by herself. Her journey is also one of self-discovery and ultimately resilience and hope. [middle grade, ages 10 and up]

Maybe a Fox by Kathi Appelt and Alison McGhee

Told in two voices — one of the fox, the other of Sylvie who has gone missing — 11-year-old Jules must cope with the loss of her mother and sister. At the moment of Sylvie’s death, her spirit might have transferred to that of an unborn fox. Is this fox meant to help Jules navigate this difficult time? [middle grade, ages 9 and up]

Lost in the Sun by Lisa Graff

Review by Randomly Reading: “Trent Zimmerman, 12, has been consumed with guilt and anger and convinced that everyone hates him ever since the accident in February.  Now, it’s the start of the school year and he is beginning middle school,  but his guilt and anger are becoming harder to contain.

The burden Trent is carrying inside himself is the accidental death of his friend Jared Richards during an ice hockey game, when the puck that Trent sent flying hit Jared in the chest, killing him due to an unknown heart condition.  Everyone tells it to get on with his life, it was an accident, but Trent is frozen at that moment.   Former friends begin to avoid Trent, and he finds it difficult to play sports any more.  But middle school, his mom tells him, is a chance to make new friends.” [middle grade, ages 9 and up]

11-year-old Dewey Kerrigan moves to New Mexico to live with her mathematician father who is working on a secret project in a town, Los Alamos, that doesn’t officially exist. The year is 1943 and this project, “the gadget,”  will change the world forever. Dewey’s life changes dramatically too when her father unexpectedly dies in the midst of this important project. [middle grade, ages 8 and up]

A Million Miles from Boston by Karen Day

The reverberations from the death of her mother might not be noticeable, but still, perhaps, are affecting rising 6th grader Lucy as she returns to her favorite spot in the world, her family’s summer home in Maine. It’s here that she most remembers her mother who died when she was six. But this summer, things are different. Ian, the annoying boy from school, is here too. And her father has a new girlfriend who seems to be trying to insert herself into Lucy’s life. Worse of all, her memories of her mother seem to be fading, but could it be that not all her memories are accurate? [middle grade, ages 8 and up]

This review is from my Japanese American Children’s Book List: This Newbery Award-winning novel is a Japanese Grapes of Wrath story about the Takashima family as they move from Iowa to Georgia in the 1950s and work menial, grueling jobs at a non-unionized poultry farm.  The three kids, Lynn, Katie, and Sammy,  manage to have fun and dream of better times ahead despite their difficult conditions until Lynn comes down with a fatal illness.  The book manages to portray life for post-WWII Japanese Americans in an insightful and realistic way. [middle grade, ages 10 and up]

Ever After Ever by Jordan Sonnenblick

This is from an earlier review: In this YA novel, two best friends are both cancer survivors.  Jeffrey Alper and Thad Ibsen are eighth-graders going through the angst of teenage adolescence as well as grappling with the after-effects of their battles with cancer.  In Jeffrey’s case with a rare form of leukemia, he has a slight limp, difficulty paying attention, and a tough time learning math concepts.  Thad’s mental capacity is razor-sharp as is his wit, but he’s wheelchair-bound.  In an effort for each to “win the girl,” Jeffrey and Thad goad each other to rise to new challenges.  Jeff, tutored with great discipline by Thad, must pass the state standardized test in order to graduate to high school.  Thad, as challenged by Jeffrey, must get out of his wheelchair to practice walking again. [young adult, ages 12 and up]

It surprises me that Trouble didn’t win Gary D. Schmidt another Newbery nod. It’s masterfully written, weaving the story of an old-money Blue Blood New England family in a small Maine Town with how racism has shaped them, with both incidents in the past and present. Henry, our middle school protagonist, is grappling with the car accident that put his older “perfect” brother into a coma. As he tries to make his way through the fog that has now beset his family, he unweaves the pieces that lead up to this tragedy; his sea captain ancestor who amassed their family fortune has played a role, a Cambodian boy at his older siblings’ private school is involved, and then there’s this mountain that challenges him to scale it.

Schmidt’s Cambodian character, Chay, has his own story to tell, and unwinds, first in a “misty” way, as italicized teaser paragraphs at the end of the early chapters in the book. When Chay begins to interact with Henry in the story, the reader can see how their lives intersected and how racism has marked their family with “trouble” that they had long been avoiding. Chay’s refugee story is embedded too and gives the reading a non-flinching view of what the boat refugees faced, both in their home country and now in America. This is a book that is difficult to put down, with a story that leaves an indelible impression about white privilege and racism in America. [young adult, ages 12 and up]

Here is another one:

“While there is another book that touches on the idea of setting records (Teddy Mars: Almost a Record Breaker), this book takes things a step further. Milo and his family pore over the new edition, know the rules of setting records, are a family with the fact that there has to be an official to document things, and attempt all manner of different things. For readers who love to read the Guinness Book of World Records, this will be fascinating. I really enjoyed Milo and Allie’s relationship and the fact that Jesse was his nephew but they acted mostly like cousins because of their age similarity. The death of Jesse’s father and the feelings of grief and of being ambivalent about moving on was one of the best representations of grief I’ve seen recently. The relationship between Milo and Brandon was also fascinating– what constitutes subtle bullying, and how often do people not get along because of simple misunderstandings? This is fast-paced, with lots of goofy record-breaking and general middle school high jinks, so will be a popular choice.” [middle grade, ages 8 and up]

Be Light Like a Bird by Monika Schroeder GIVEAWAY

Please fill out the Rafflecopter below to enter. I can only mail to U.S. addresses due to the high cost of shipping. 14 thoughts on “11 Chapter Books About Grief and Loss”