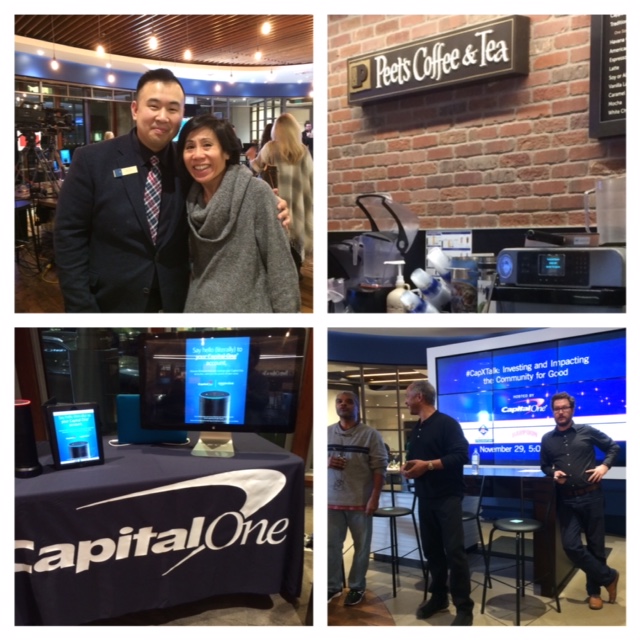 This is a sponsored post written by me on behalf of Capital One. The #CapXTalk at the Capital One Cafe in Back Bay Boston was a celebration of Giving Tuesday and how Boston’s companies give back to the community in different and innovative ways. I was in the audience and I took a few clips but you can watch the entire 45 minute live stream too! It was my first time to the Capital One Cafe even though it’s down the street from my office. I was greeted by really friendly and helpful staff who serve as Capital One Ambassadors, including Jacky Chong. We struck up a conversation and I learned about the Capital One Teen debit card. My 16-year-old, a high school junior, has off campus privileges during school which she uses to buy food in town and she just got a debit card. It was our way of teaching her personal finance and it’s worked! She adds (her) money to her card when she earns it and has to keep track of how much is left. The Capital One Teen debit card has some built-in safety features that I really like including not allowing her to buy cigarettes or alcohol with it! Another really innovative feature at Capital One is an ATM that does not require an ATM card! You simply just tap your mobile device against it to get your money! The thing about Capital One is that it’s innovating in two ways. Their entry into retail banking is based on online banking, focusing on mobile and tech savvy milleniels who merge work and leisure with a view of the world that includes social justice.

Capital One doesn’t want to leave behind those who don’t have access to technology. That’s where their own charity work begins. They focus on programs and charities that give technology to underserved kids. In fact, the panel for #CapXTalk included Capital One’s Foundation, Red Sox Foundation, and Harpoon Brewery. Each company gives back to the community in different ways, with different philosophies, and maybe each of us can use these ideas to champion charity work in our own workplaces. Much like they would evaluate a loan, Capital One Foundation has an overarching theme of giving. Theirs is technology for underserved youths. They find nonprofit partners and then analyze based on effectiveness. They allow for innovation and failure, learning from mistakes, in an effort to help their programs and their non profits succeed. A really cool example is their coding for girls event in Dallas which set a world record for participation!

Another major investment that Capital One Foundation does is Future Edge. This is a five-year, $150 commitment to equipping Americans with the skills they need to succeed in today’s digital economy, and C1 Coders, which helps to close the gender gap in STEM for middle school students.

In Boston specifically, the brand has partnered with charitable organizations like Boston Cares, ABCD and Junior Achievement, and also launched the Give Back campaign, which empowers and funds Capital One associates to support local causes of their choice.

It was clear that charity work at the Red Sox organization begins with rolling up your sleeves and that management, aka the owners, consider charity work to be their privilege. They fund many different programs but it all starts with an internal champion … like David Ortiz who uses his celebrity to fund open heart surgery in the Dominican Republic. Their Boston Red Sox Scholars program gives college scholarships to kids in need and is funded by working with license plate manufacturers to sell Red Sox vanity plates. You’ll find that the charities that the Red Sox Foundation supports will include one of their own organization’s member on the board of that non-profit, both writing a check and showing up to volunteer.

Out of 600 asks, Harpoon Brewery fulfils 400! That’s 2/3 of all requests, whether it’s a basket of Harpoon logo gifts for a charity auction, or something beer for an event. Harpoon Brewery’s charity work focuses around events and their 5 miler Race is a good example of rallying around a cause — in this case cancer — to raise money, have a good time, and build community. Because that’s exactly how they do it. Capital One wants to empower people to feel more confident with their relationships with money so that their money can ultimately fit their life, and they’re redesigning the banking experience to help them do just that.

The company is implementing new programs and ways for people to think about their finances and is continuing to develop and pilot innovative digital financial technology. This means innovative products, digital tools and Cafés that help customers feel confident in their relationship with their money and confident about their ability to achieve their goals.

Within the Cafés, Capital One is also piloting an exciting first-to-industry series of supper club-style money workshops and offering 1:1 money coaching sessions, which are designed to help people reshape their perspectives about their relationship with money. It’s free for everyone and super easy to schedule a session in their Harvard Square Café, so please check that out, my readers in the Boston area!

The #CapXTalk panel discussion is part of Capital One’s continued growth in Boston and ongoing efforts to reimagine banking. Their Café concept came to Boston more than two years ago and has since expanded to five Café locations across the city. They just announced they will be expanding to Hingham, Lynnfield and the Seaport in the coming months. I’m hoping they will open in Newton soon!