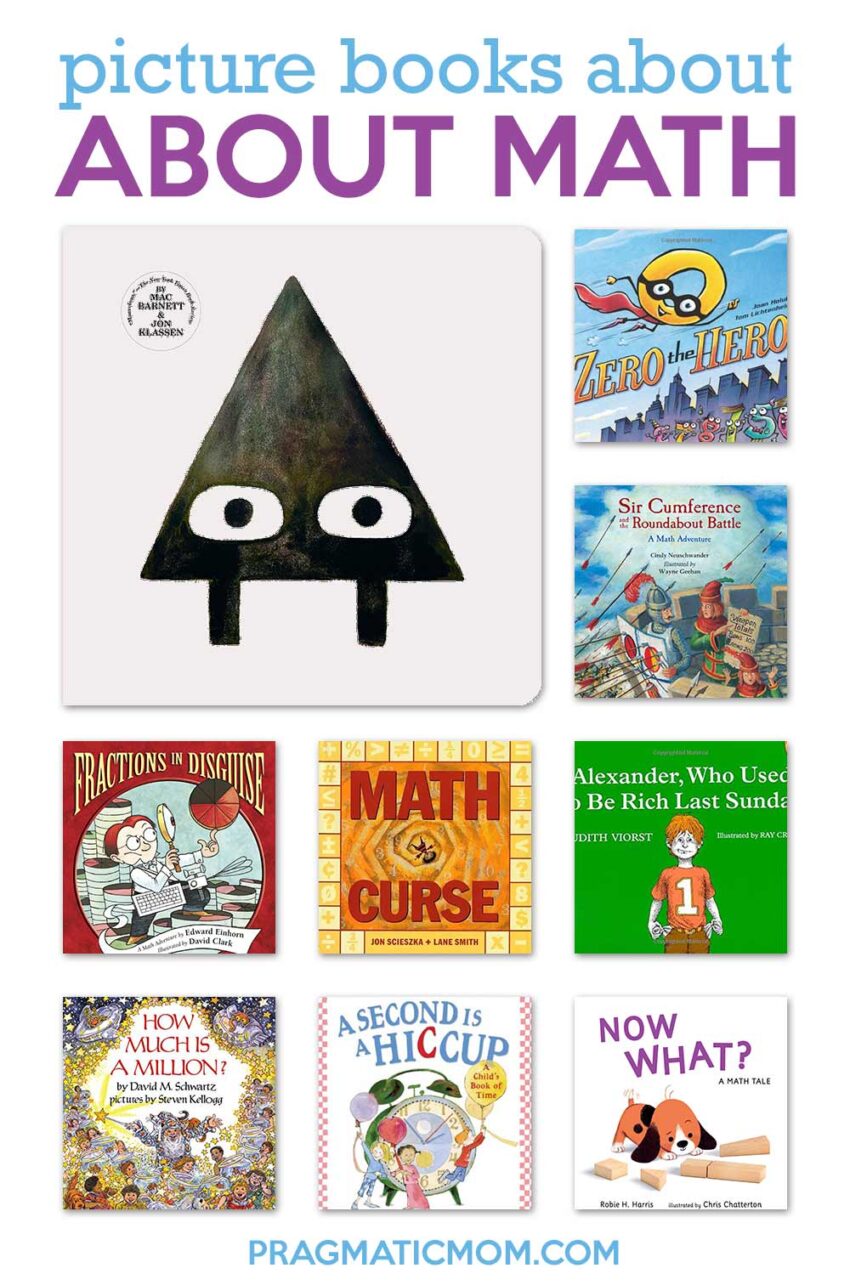 My son has always been the math-iest of my three kids but now my middle, PickyKidPix, has proclaimed two years in a row now that math class is her favorite, though her most challenging. I have had a love of mathematics; with a math professor for a father, my childhood was fraught with extra math homework and pop quizzes in the car. I’ve always preferred stories.

But now there are math picture books that bring a story to a math concept, making it friendly and easy to absorb. Some of these books pose as mysteries, others as adventures. All are captivating entertainment that draws kids into math.

I think if I were raised on these kinds of stories, I would have had a different relationship with math. Less adversarial. Less black and white. My son and I have had read dozens of math picture books to bring you our favorites here.

How about you? What are your favorite math picture books? Thanks for sharing!

The History of Mathematics: The Story of Zero, Getting Something from Nothing

Zero the Hero by Joan Holub

Zero doesn’t feel like an important number. The other numbers are not even sure if Zero is a number. Zero is not a floaty, a donut, or a bagel; Zero is a hero. But when you add zero or multiply zero, not much happens. It takes a crisis to realize how important Zero is, and to bring out Zero’s heroic qualities. This is a hilarious picture book to get kids thinking about a very big numeric concept! [picture book, ages 4 and up]

Sir Cumference and the Roundabout Battle: A Math Adventure by Cindy Neuschwander, illustrated by Wayne Geehan

My son loves this entire series and even though he’s a little old for these math concepts, he still wanted this newest release, a math adventure about how rounding saves their castle from invaders. Friendly rounding numbers make approximating sums much easier, and in the context of Sir Cumference and a battle, it also makes it exciting. [picture book, ages 6 and up]

Fractions in Disguise: A Math Adventure by Edward Einhorn, illustrated by David Clark

This is a fun math adventure that takes simplifying fractions and makes it a Who Dunnit adventure. It’s a very clever way to make fractions fun. When a new 5/9 sculpture goes missing at an auction, it’s up to George Cornelius Factor to find the culprit using his trusty Reducer machine to take a fraction and turn it into its lowest form.  [picture book, ages 7 and up]

This is, by far, my son’s favorite math picture book. I think we’ve read it hundreds of times. It’s nice, too, that the math concepts are puzzles to enjoy in small increments if you’re running past bedtime, or in its entirety. Jon Scieszka brings humor to math in his inimitable way. This is a picture book that you won’t mind reading over and over again! [picture book, ages 4 and up]

Alexander Who Used to be Rich Last Sunday by Judith Viorst, illustrated by Ray Cruz

Money burns a hole in my oldest’s pocket, so this book always comes to mind when she was young and received or earned some money and had the feeling of being rich, followed by that impulse to spend, spend, spend! These days now that she’s much older, she’s much better at saving her money. This book which we read together helped to reinforce my saving message in the most humorous way possible. [picture book, ages 4 and up]

How Much Is a Million? by David M. Schwartz, illustrated by Steven Kellogg

A million is a difficult concept to imagine and this book does a great job helping to put that number into context kids can visualize. Counting to a million takes about 23 days, for example! Once a million has sunk in, Schwartz goes on to explain a billion and then a trillion! Steven Kellogg’s engaging illustrations make these math concepts fun and easy to understand. I’d use this picture book as soon as your child talks about a million. [picture book, ages 4 and up]

This trilogy of picture books features different shapes up to sneaky tricks. It’s a fun and funny way to learn about shapes. In this book, learn about triangle versus square. [picture book, ages 2 and up]

One Minute by Somin Ahn

I love how this book gives a sense of time in just a single minute. From saving a life to blinking your eyes 20 times, the space of a minute can feel long or short. Kids will be able to get an intuitive sense of time and take this abstract concept and relate it to their own life. [picture book, ages 4 and up]

A Second is a Hiccup by Hazel Hutchins, illustrated by Kady MacDonald Denton

Time can feel long or short, depending on the circumstances. This picture book ties something recognizable to increments of time. A second is the time it takes to kiss your mom. A minute is sixty hops. An hour is a pretty long time for imaginative play. Starting with a second, and working in time increments (minute, hour, day, week, month, and year), kids get relatable examples of units of time. Pair this is How Much Is A Million to compare large numbers with time. [picture book, ages 4 and up]

Among the Odds and Evens: A Tale of Adventure by Priscilla Turner, illustrated by Whitney Turner

I love how this story gives character traits to the concept of odd and even numbers; playing off the definition that “odd” can also mean “weird.” This is a math concept book that also works as a story of compassion, tolerance, and anti-bullying. X and Y come to the land of Odd and Even and observe: Even numbers are orderly and Odd numbers are peculiar, and yet odd and even numbers fall in love and marry! Even more interesting, Even numbers have Even children, but two Odd parents can also have Even children. For children who like a story with their number concepts, this one makes even and odd numbers unforgettable. [picture book, ages 4 and up]

This story is about two polar bear cubs abandoned by their mother at the Denver Zoo, and their fight for survival which includes fractions. This is a fun series to learn about math through zoo animal stories. Polar Bear = Fractions, Panda = Subtraction, Tiger = Graphing, cheetah = Division, and Chimp = Telling Time.  [picture book, ages 6 and up]

Forever or a Day by Sarah Jacoby

In evocative prose, this picture book captures the paradox of time. What is time exactly? How is it measured and counted? It’s eternal but also finite, and helps us determine how we live even though we can’t really touch it or see it, but we certainly feel it! [picture book, ages 4 and up]

Now What? A Math Tale by Robie H. Harris

Puppy uses blocks to explore geometry, finding that it can make a rectangle shape from blocks of different shapes. This rectangle becomes the perfect place for a nap!  [picture book, ages 2 and up]

A Million Dots by Sven Völker

Dots are a wonderful way to illustrate a very large number such as a million. To get to one million dots, the story starts with the number one, and then the number doubles with each page turn. This is also a way to introduce young children to the concept of double exponential, a number theory concept for another day.  [picture book, ages 4 and up]

In the Half Room by Carson Ellis

A fun quirky story that hammers in the concept of fractions, specifically half! [picture book, ages 4 and up]