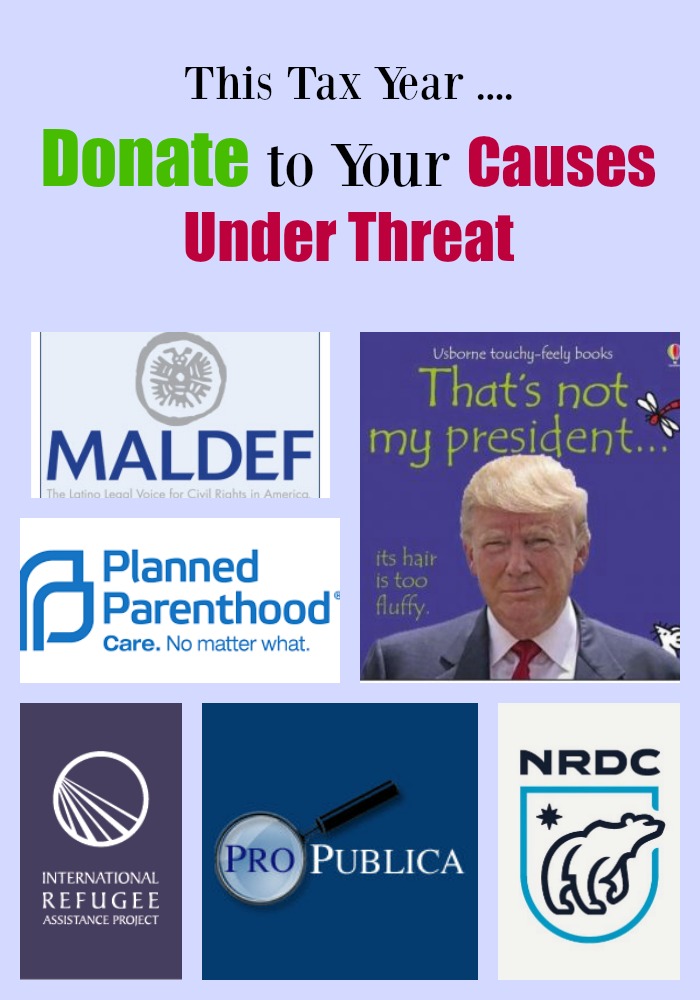 We do what we can to fight injustice anywhere we see it—whether it’s writing a check or rolling up our sleeves. Aaron Sorkin in a letter to his daughter (full letter below)

There are plenty of things to worry about during a Trump Presidency and Republican controlled government. If you are worried about this too, here are non-profits to support:

Planned Parenthood (I donated in Mike Pence’s name and he’s going to get a certificate from them for my donation!) Worried About Our Environment and Global Warming? Support: Worried about Combatting the Rise in Racism? Support:

Worried About Freedom of the Press? Support: For those who can, now is the time to donate to your causes under threat.

The only thing necessary for the triumph of evil is that good men should do nothing.

There is only one way to avoid criticism: do nothing, say nothing, and be nothing. Aristotle p.s. I share this letter from Vanity Fair that Aaron Sorkin Wrote His Daughter After Donald Trump Was Elected President

Well the world changed late last night in a way I couldn’t protect us from. That’s a terrible feeling for a father. I won’t sugarcoat it—this is truly horrible. It’s hardly the first time my candidate didn’t win (in fact it’s the sixth time) but it is the first time that a thoroughly incompetent pig with dangerous ideas, a serious psychiatric disorder, no knowledge of the world and no curiosity to learn has.

And it wasn’t just Donald Trump who won last night—it was his supporters too. The Klan won last night. White nationalists. Sexists, racists and buffoons. Angry young white men who think rap music and Cinco de Mayo are a threat to their way of life (or are the reason for their way of life) have been given cause to celebrate. Men who have no right to call themselves that and who think that women who aspire to more than looking hot are shrill, ugly, and otherwise worthy of our scorn rather than our admiration struck a blow for misogynistic shitheads everywhere. Hate was given hope. Abject dumbness was glamorized as being “the fresh voice of an outsider” who’s going to “shake things up.” (Did anyone bother to ask how? Is he going to re-arrange the chairs in the Roosevelt Room?) For the next four years, the President of the United States, the same office held by Washington and Jefferson, Lincoln and Teddy Roosevelt, F.D.R., J.F.K. and Barack Obama, will be held by a man-boy who’ll spend his hours exacting Twitter vengeance against all who criticize him (and those numbers will be legion). We’ve embarrassed ourselves in front of our children and the world.

And the world took no time to react. The Dow futures dropped 700 points overnight. Economists are predicting a deep and prolonged recession. Our NATO allies are in a state of legitimate fear. And speaking of fear, Muslim-Americans, Mexican-Americans and African-Americans are shaking in their shoes. And we’d be right to note that many of Donald Trump’s fans are not fans of Jews. On the other hand, there is a party going on at ISIS headquarters. What wouldn’t we give to trade this small fraction of a man for Richard Nixon right now?

So what do we do?

First of all, we remember that we’re not alone. A hundred million people in America and a billion more around the world feel exactly the same way we do.

Second, we get out of bed. The Trumpsters want to see people like us (Jewish, “coastal elites,” educated, socially progressive, Hollywood…) sobbing and wailing and talking about moving to Canada. I won’t give them that and neither will you. Here’s what we’ll do…

…we’ll fucking fight. (Roxy, there’s a time for this kind of language and it’s now.) We’re not powerless and we’re not voiceless. We don’t have majorities in the House or Senate but we do have representatives there. It’s also good to remember that most members of Trump’s own party feel exactly the same way about him that we do. We make sure that the people we sent to Washington—including Kamala Harris—take our strength with them and never take a day off.

We get involved. We do what we can to fight injustice anywhere we see it—whether it’s writing a check or rolling up our sleeves. Our family is fairly insulated from the effects of a Trump presidency so we fight for the families that aren’t. We fight for a woman to keep her right to choose. We fight for the First Amendment and we fight mostly for equality—not for a guarantee of equal outcomes but for equal opportunities. We stand up.

Roxy, I know my predictions have let you down in the past, but personally, I don’t think this guy can make it a year without committing an impeachable crime. If he does manage to be a douche nozzle without breaking the law for four years, we’ll make it through those four years. And three years from now we’ll fight like hell for our candidate and we’ll win and they’ll lose and this time they’ll lose for good. Honey, it’ll be your first vote.

The battle isn’t over, it’s just begun. Grandpa fought in World War II and when he came home this country handed him an opportunity to make a great life for his family. I will not hand his granddaughter a country shaped by hateful and stupid men. Your tears last night woke me up, and I’ll never go to sleep on you again.

My husband responds to our kids:

Please read, below, letter that a well-known Hollywood writer penned to his daughters after Trump won. He says everything that I want to tell you but have not the way with words.  We will fight, we will win.

Only thing I will add is that when you pick a fight, have your facts spot on and never be the one to reach the gutter first, especially on social media.  Always remember, your adversary is as passionate as you are, about their positions/beliefs.  That does not make them a bad person – they are just misguided and wrong. 😉  The way to win and advance your position is to educate yourselves and know what you’re talking about – completely.  And never initiate tirades involving profanity – you lose credibility by doing so.  Build your arguments step by step, and kill them with logic.

It’s been difficult last few days.  Your mom and I have been emotional as well.  It’s been hard to watch our country reject what we (and most of our friends) believe and go down a path that will have long lasting consequences.  Most of all, you are loved and are safe.  We will do everything we can to keep you safe.

During your campaign for President of the United States, you railed against “powerful special interests” that have “rigged our political and economic system for their exclusive benefit.” You excoriated trade deals that you described as “mortal threat[s] to American manufacturing” and “disaster[s] …. pushed by special interests. ” You promised that you would “not be controlled by the donors, special interests and lobbyists who have corrupted our politics and politicians for far too long,” and that you would “drain the swamp” in Washington D.C. And you won election largely on the strength of these promises.

The American people are watching to see if you were sincere in your campaign promises to look out for the interests of working families, rather than the interests of the rich and powerful. Now it is time to live up to those promises. Unfortunately, you already appear to be failing. Within days of your election, you have elevated a slew of Wall Street bankers, industry insiders, and special interest lobbyists to your transition team. Even more are rumored to be named as potential cabinet members. Based on public reports, your transition team and your potential cabinet include over twenty Wall Street elites, industry insiders, and lobbyists making decisions that could have huge implications for their clients or employers. They include, among many others, a former Goldman Sachs executive who is rumored to be a Treasury Secretary pick; a paid consultant for Verizon who is making key decisions on your administration’s Federal Communication Commission; a “top lobbyist” whose firm lobbied on behalf of issues related to the Trans-Pacific Partnership who is shaping your Labor Department; and a climate-change denying, oil industry-paid think tank fellow who is leading your environmental team’s transition.

If you truly stand by your commitment to making government work for all Americans – not just those with armies of lobbyists on payroll – you must remove the lobbyists and financial bigwigs from your transition team and reinstate a group of advisors who will fight for the interests of all Americans. Maintaining a transition team of Washington insiders sends a clear signal to all who are watching you – that you are already breaking your campaign promises to “drain the swamp” and that you are selling out the American public.

2 thoughts on “Donate to Causes Under Threat #GivingTuesday”