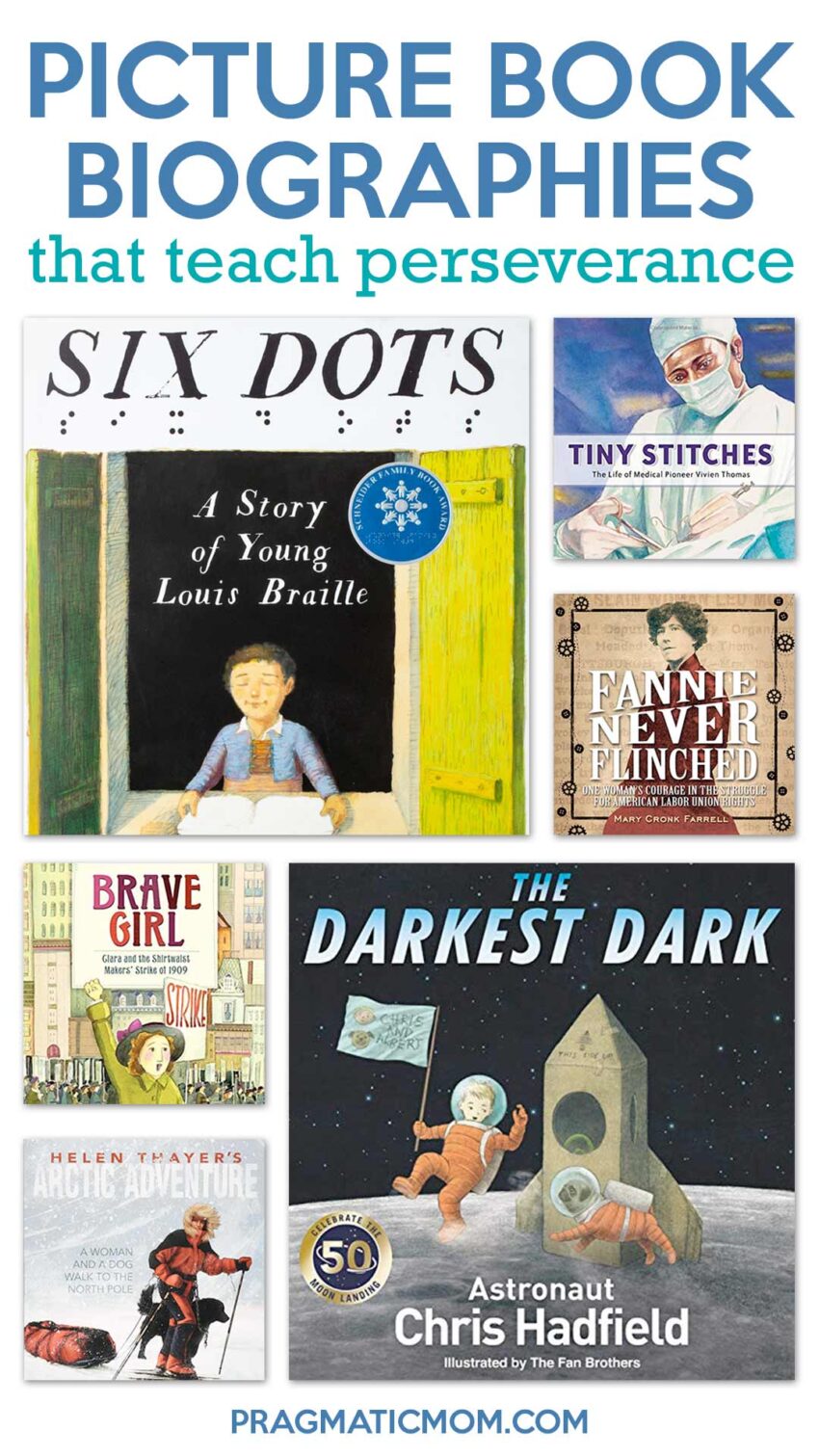 The people profiled in these picture book biographies have overcome tremendous obstacles. Who else should I add to this list? Thanks for your suggestions! I never knew that Louis Braille lost his vision as a little boy from an accident with an awl. By the time he was five, he was completely blind. He dreamt of reading books but even the books at the Royal School For the Blind in Paris had large raised letters and very few words. A secret code developed by a French army captain gave him an idea. Using the awl again, he spent years developing a way to simplify the captain’s code. And this code is known today as Braille! [biography picture book, ages 4 and up]

The Darkest Dark by astronaut Chris Hadfield, illustrated by The Fan Brothers Being in the dark can feel scary, and young Chris Hadfield was scared to sleep in his own bed. Still, he dreamed of becoming an astronaut. When he watched the moon landing on television, he noticed that outer space was the darkest dark ever. And he made up his mind that while the darkness of space was darker than his room, he was going to explore it one day. And so he did, twenty-three years later after that day. [biography picture book, ages 4 and up] Did you know that the first successful open-heart surgery on a baby was performed in 1944 at Johns Hopkins? Credit went to Dr. Blalock who performed the operation but the person who actually developed the procedure and instruments was never given credit. He, Vivien Thomas, was a black man without a medical degree. And yet it was Vivien who stood behind Dr. Blalock to give him step-by-step instructions during the operation. It’s taken more than twenty-six years for the medical community to recognize his contribution. With only a high school education, Vivien Thomas overcame racism to become a medical pioneer, saving the lives of countless “blue babies.” [advanced picture book biography, ages 6 and up]

In 1897, Fannie toiled in a garment shop and dreamed of organizing a union for seamstresses like ones started in Chicago and New York. In 1902, she helped start Ladies’ Local 67 of the United Garment Workers of America. Her work expanded beyond the garment workers to the coal mines of West Virginia where a feudal system was in place, condemning those who worked in the mines to poverty and dangerous work conditions. There was one millionaire mine owner who was worse than the rest, Lewis Hicks. And it was these miners that Fannie helped to organize.

In 1919, police officers in Natrona, Pennsylvania opened fire on Fannie Sellins, just as she was herding a group of children to safety during a riot. Autopsies showed that she died of a crushed skull with three gunshots in her head and back. None of these officers were found guilty.

Pair this book with Brave Girl: Clara and the Shirtwaist Makers’ Strike of 1909. [advanced biography picture book with chapters, ages 9 and up]

Helen Thayer’s Arctic Adventure: A Woman and a Dog Walk to the North Pole by Sally Isaacs, illustrated by Iva Shasheva Helen Thayer’s mid-life crisis at age 50 was to walk around the magnetic North Pole. No woman had done it, and she wanted to accomplish it alone. Luckily she took the advice of a local bear hunter, who insisted that she take at least one dog for protection from polar bears. The dog, Charlie, saved her life from a bear attack. Harsh weather conditions made it difficult to complete the expedition but Helen succeeded. Use this book to inspire your young adventurer! Helen Thayer has a website, Adventure Classroom, to invite students to explore our world. [biography picture book, ages 6 and up]