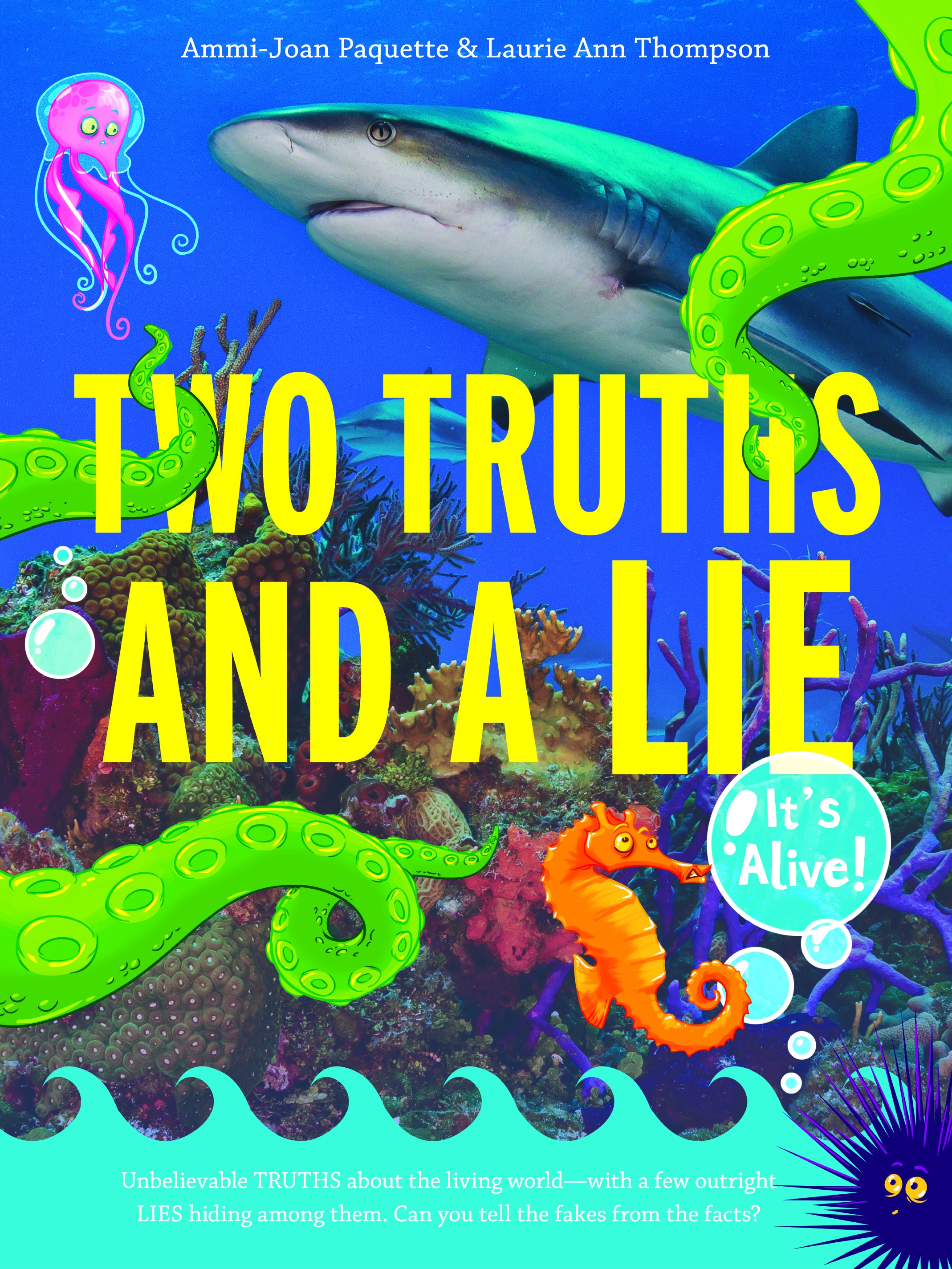 Did you know that there is a fungus that can control the mind of an ant and make it do its bidding? Would you believe there is such a thing as a corpse flower—a ten-foot-tall plant with a blossom that smells like a zombie? How about a species of octopus that doesn’t live in water but rather lurks in trees in the Pacific Northwest?

I’m so excited to reveal the cover of Two Truths and a Lie by Laurie Thompson and Ammi-Joan Paquette today! What is it about, you ask?

Have you ever played that ice-breaker game, where each person has to tell three “facts” about him or herself, but only two are true? This is a compendium of amazing stories about wacky and wonderful things in nature and history, combined with made-up stories. Kids are challenged to determine which ones are the falsehoods, thus helping them develop some discernment about what they read, encouraging them to conduct their own research, and teaching them facts about the world we live in, all in one tidy, high-interest package.

Every story in this book is strange and astounding. But not all of them are real. Just like the old game in this book’s title, two out of every three stories are completely true, and one is an outright lie. Can you guess which? It’s not going to be easy. Some false stories are based on truth, and some of the true stories are just plain unbelievable. And they’re all accompanied by dozens of photos, maps, and illustrations. Amaze yourself and trick your friends as you sort out the fakes from the facts!

Acclaimed authors Ammi-Joan Paquette and Laurie Ann Thompson have teamed up to create a series of sneaky stories about the natural world designed to amaze, disgust, and occasionally bamboozle you. Let’s hear it from the authors themselves:

You should know something right up front: this book is sneaky. Everybody knows the way books normally work. If you pick up a work of fiction, you know that most of what you will read in between those covers is made up. It’s a delicious creation straight from the imagination of the author. If you pick up a nonfiction book, then you can count on the contents being true and factual.

But this book is not all fiction nor all nonfiction. Instead, it’s a bit of both.

All around us, everywhere in the world, there are lies. But there are truths, too. And sorting out the one from the other is a really important—and seriously interesting—part of life.

So here’s the way this book works. Each section is broken down into chapters and each chapter consists of three stories. If you’ve read the book’s title, I bet you know where we’re going with this. In every single chapter: two of the stories are 100%, cross-your-heart-and-hope-to-die TRUTHS; and one of the stories is a complete fabrication—a LIE!

But which is which? Ah, that’s where you come in. Even the lies might have kernels of buried truth. And some of the truths are so unbelievable, they will scramble your brain! Your mission is to separate the two.

So pull up a chair and settle in for a rocking good read. Just remember: don’t take these stories at face value. Read them. Talk them over with your friends. Do your own research. Dig around online (safely, of course!). When it comes to information—and life, really—asking good questions is a kind of superpower.

And the answers are out there, we promise.

They’re just waiting for you to find them.

If you eager for the adventure to begin and want to bone up before tackling Two Truths and a Lie, you might want to learn more about: Ammi-Joan Paquette has traveled to 27 countries, has the ability to wake herself up at a given time without an alarm clock, and once climbed Mt. Everest. (Not all of these are true!)Joan is the author of the Princess Juniper series, as well as the novels Rules for Ghosting and Nowhere Girl, and the picture books Petey and Pru and the Hullabaloo, Ghost in the House, The Tiptoe Guide to Tracking Mermaids, and The Tiptoe Guide to Tracking Fairies.

She is the recipient of a PEN New England Discovery Award honor, and her books have been recognized with starred reviews and on a variety of “Best of the Year” lists.  She lives outside Boston, Massachusetts, where she balances her own writing and her day job as a literary agent. You can visit her online at www.ajpaquette.com. Laurie Anne Thompson has ridden a pig, gotten stuck in an elevator overnight, and jumped out of a perfectly good airplane. (One of these facts is not true, can you guess which?) She is the author of Be a Changemaker: How to Start Something That Matters, My Dog Is the Best, and Emmanuel’s Dream, a picture book biography about Emmanuel Ofosu Yeboah, which was the recipient of the Schneider Family Book Award and was named an ALA Notable Book, a CCBC Choice, and a Bank Street College Best Book of the Year, among dozens of other accolades. She lives outside Seattle with her family. You can visit her online at www.lauriethompson.com. 4 thoughts on “TWO TRUTHS AND A LIE Cover Reveal”