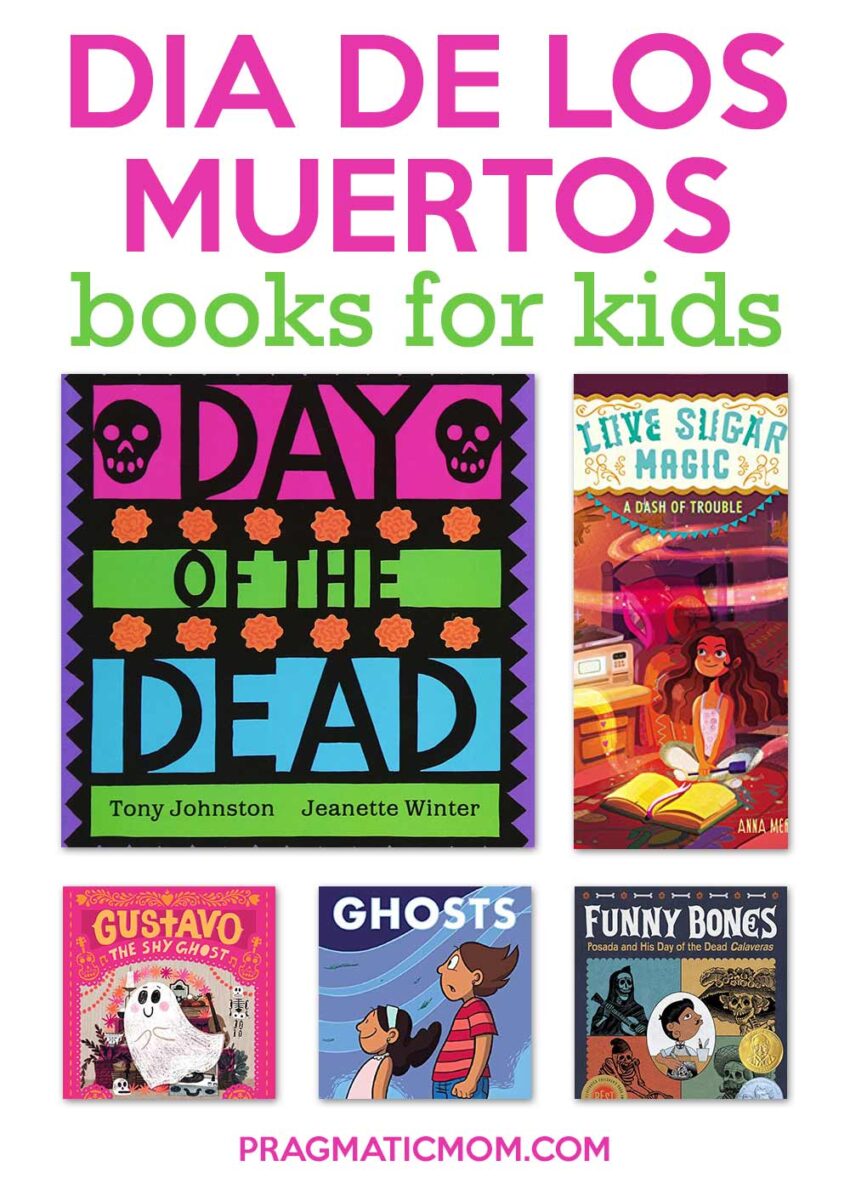 Celebrate Dia de los Muertos with these Day of the Dead Children’s Books! Perfect for toddlers and young children.

It’s October now and time to start thinking of Halloween and costumes for my kids who still want to trick or treat. But it’s also time for Day of the Dead. It sounds like a somber holiday, but it’s more of a celebration of departed loved ones.

Because the days are the same, it’s easy to associate Day of the Dead, Dias de los Meurtos, with Halloween but it actually reminds me more of Obon in Japan.

Day of the Dead (Spanish: Día de Muertos) is a Mexican holiday celebrated throughout Mexico and internationally where family and friends remember friends and family members who have died, and help support their spiritual journey in a festive and celebratory way starting October 31 and ending November 2.

Halloween came from the Western Christian feast of All Hallows’ Day in observance of Allhallowtide which starts October 31 and ends November 2. It’s a time to “remember the dead, including martyrs, saints, and all faithful departed Christians.” I’m not actually sure if All Hallows’ Day is a festive or somber occasion.

In the United States, Halloween it’s a day to Trick or Treat for candy the night of October 31 dressed up in costumes. In our neighborhood, we have a tradition called Ghosting.

Obon is a Japanese Buddhist custom to honor the spirits of one’s ancestors. This Buddhist-Confucian custom has evolved into a family reunion holiday during which people return to ancestral family places and visit and clean their ancestors’ graves, and when the spirits of ancestors are supposed to revisit the household altars. It has been celebrated in Japan for more than 500 years and traditionally includes a dance, known as Bon-Odori. Obon is celebrated the 15th day of the 7th lunar month which is usually around the 15th of August.

Dia de los Muertos, the 2013 story of a little girl who learns the true meaning of the Day of the Dead — remembering and celebrating loved ones who have died.

The animation is a Ringling College of Art and Design student project from Ashley Graham, Kate Reynolds, and Lindsey St. Pierre, collectively known as Whoo Kazoo. You can also buy or make your own Sugar Scull candy. Day of the Dead children’s books

This latest graphic novel by Raina taps into her childhood growing up in foggy Northern California like my husband. He’s from Monterey, and she’s from Half Moon Bay which is about an hour and a half apart by car but equally foggy, windy, and cold.

Catrina and her family have relocated to a foggy seaside town for her little sister who has Cystic Fibrosis. Their new town is said to be haunted by ghosts who get a warm reception, especially on Día de Muertos.

Starting a new school is a difficult transition for Catrina, but accepting ghosts is even harder for her. Are these ghosts coming after her little sister?

This is a wonderful way to draw kids into a holiday that they might not know about or celebrate. I also love how this book raises awareness about Cystic Fibrosis. Like Raina’s popular graphic novels Smile, Drama, and Sister, she has a gift for portraying teens and their complicated relationships with friends and family. [graphic novel, ages 8 and up]

I wanted to add the comments from American Indians in Children’s Literature about Catholic Missions and ghosts referenced in Ghosts:

That visit to the mission is the point where–for me–the story really starts to unravel.

The missions were there (obviously) for a specific reason: to turn Native peoples into Catholics and to claim that land for Spain. Some see missions and missionary work as a good, but if you pause for a minute and think about what they and that work is designed to do, and if you do a bit of reading, you’ll learn that it was far from the benevolent character with which it is regarded by most of society.

At the missions, life for Native people was brutal. There was rape. Enslavement. Whippings. Confinements. And of course, death. Analyses of the bones at the mission burial sites that compare them with bones found elsewhere show that the bones of those who died at the missions were stunted and smaller than the others.

Some of Telgemeier’s ghosts might have spoken Spanish, but it is far more likely that their first language was an Indigenous one. Did they joyfully want to be spoken to in Spanish, the language of their oppressors? …

I strongly urge people to read Deborah Mirandah’s Bad Indians. Look, especially, at her chapter, The End of the World: Missionization. There, she presents an accurate version of what children across California are asked to do: a mission study. But Deborah’s doesn’t soft pedal or whitewash what happened. She describes items, like a cudgel (p. 15):

Wooden club used to strike quickly; alcaldes, soldiers, and sometimes padres carried these with them for spontaneous corrections throughout their day. The alcaldes used these during services in church to remind the Indians to be quiet, to pay attention, and to stay awake. A longer cudgel or cane was useful during Mass because the alcalde could reach far into a crowd without having to move very much.

Look, too, at A Cross of Thorns: The Enslavement of California’s Indians by the Spanish Missions by Elias Castillo. He writes about treatment of Native people who tried to escape the missions. When caught, the friars at Mission San Francisco burned crosses into the faces of men, women, and children.

Here are criticisms of Ghosts that I found from Ms. Yingling Reads:

I also have more Day of the Dead books here on my 10 Great Picture Books to Learn About Mexico.

Day of The Dead by Tony Johnston

The rituals of Day of the Dead come to life in this charming picture book that follows a family all day as they prepare for this holiday. There are special foods to be made, fruit and flowers to gather, and candles to bring on this special day to honor the dead.

It actually spans three days, from October 31 to November 2, and is a time to honor one’s ancestors. [picture book, ages 4 and up]

Funny Bones: Posada and His Day of the Dead Calaveras by Duncan Tonatiuh

Born in 1852, José Guadalupe Posada created calaveras, the festive bony figures associated with the Day of the Dead. His calaveras drawings were also political cartoons that communicated his ideas to the Mexican people who couldn’t read.

Gustavo is a ghost who wants to make friends but he’s too shy to talk to the other monsters. Perhaps Day of the Dead will be the perfect opportunity to let others see him. Will he be able to let everyone see him at his violin concert?

Love Sugar Magic: A Dash of Trouble by Anna Meriano

For kids who like the TV show Wizards of Waverly Place, this chapter book has the same light-hearted magical but with more Latino culture. Leo (Leonora) is the youngest sister in the Logrono family. They own a panaderia (bakery) that makes the most delicious pan dulce, cookies, and cakes around.

Leo can’t skip school to help prepare for Dia de los Muertos, so she sneaks out of school to check on the bakery when it seems suspiciously dark. She discovers that her family members are brujas (witches), and their kitchen magic adds a special ingredient to their baked goods.

She learns that she’s still too young to learn about magic so she decides to learn on her own. Unfortunately, when she tries out her magic to help a friend, things get out of control. This is a fun series for anyone who ever felt that they were the last to try things in their family! You can also try some magic on your own!

Recipes are in the back for cookies, Pan De Muerto Mensajaro (a type of sweet bread), and Alegrías (Amaranth bars) which do not require cooking. [chapter book, ages 8 and up]

Obon is celebrated by a dance which is described in Suki’s Kimono on my Top 10: Multicultural Dance Picture Books. Girls and women wear beautiful summer kimonos made of cotton called yukata. Use this picture book for a multicultural connection of Día de Muertos.

Bon Odori is a welcome dance to celebrate deceased ancestors visiting descendants during the Obon festival. This happens during late summer in Japan. Everyone puts on colorful lightweight cotton kimono and does a simple and rhythmic dance in the street.

When I was visiting Japan, I was able to participate even though all the moves were new to me. 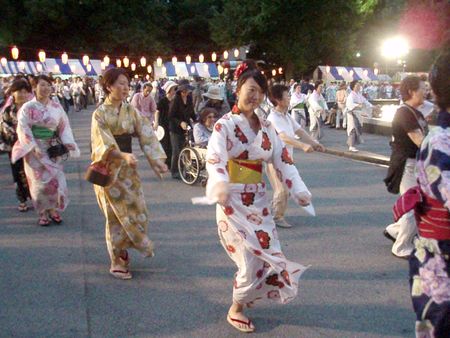 Suki wants to wear her kimono on the first day of school. However, her sisters discourage her because they think the other kids will tease her. They do, but Suki doesn’t care.

When she gets up to tell the class about her summer, she demonstrates the Obon dance she learned. And she gets a standing ovation! [picture book, ages 4 and up]

The Día de Muertos display was just coming down at The Peabody Museum at Harvard University the day my son’s 5th grade went to learn more about the Mayans. There were great masks, dolls, and cut paper decorations. 10 thoughts on “Dia de los Muertos versus Obon: 2 Celebrations that Honor the Dead”