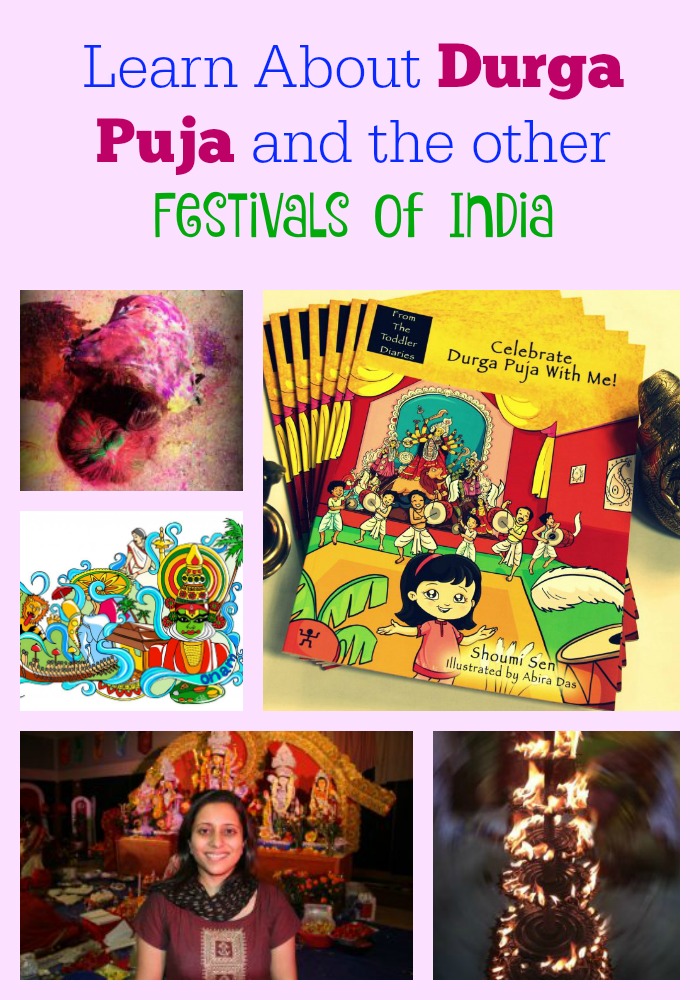 Please welcome Shoumi Sen who is guest posting for me today. She’s the author of Celebrate Durga Puja With Me! Her book celebrates an important festival of India, Durga Puja, which is about the Mother Goddess, and the victory of the revered warrior Goddess Durga over the evil buffalo demon Mahishasura. Like Chinese New Year, families buy new clothes, prepare special food, and spend the day with friends and loved ones. Durga Puja begins today, September 30th!

Celebrate Durga Puja With Me! by Shoumi Sen

Learn about a festival of India, Durga Puja, in this colorful rhyming picture book. [picture book, ages 4 and up]

Priya’s Lit Blog also has a great review of Celebrate Durga Puja With Me!

Shoumi will tell us more about Durga Puja and the other Festivals of India.

The Festivals of India

Indian society celebrates many festivals and an internet search for ‘Festivals of India’ will invariably result in a long list! India is a diverse nation – her people speak many different languages and practice different religions. People here are spiritual and fun loving and the myriad of festivals fill up the months from January to December. There are religious festivals like Diwali, Holi, Christmas and Eid, seasonal festivals like Onam, Baisakhi, Makar Sankranti and Lohri and national festivals like Republic Day and Independence Day. Here are four popular festivals; this list is but a fraction of the many that are celebrated throughout the year!

Holi – The Festival of Colors Celebrated every year in spring, this two day festival is rooted in Indian mythology and celebrates the victory of good over evil. It is said that there once lived an evil king, Hiranyakashipu, whose devout son, Prahlad worshiped Lord Vishnu. This angered the king, who wanted everyone in his kingdom to worship him and nobody else. He tried many devious ways to take the boy’s life, but each time, Prahlad miraculously escaped. In despair, he turned to Holika, his evil sister and asked her to destroy the child. Knowing that she could not be harmed by fire, Holika took the boy in her lap and entered a bonfire. However, Prahlad escaped the burning flames and Holika met her fate.

Holi gets its name from Holika and on the first day of this festival, bonfires are lit, signifying the destruction of evil. However, it is on the second day that the Festival of Colors lives up to its name! On this day, people celebrate by throwing colored water on each other, smearing each others’ faces with ‘abeer‘ (colored powder) and generally having a jolly good time! Colorful water guns called ‘pichkaris are used to spray water on each other and shouts of ‘Holi Hai!’ (It is Holi) fill the air. This is often accompanied by music and dancing and a ton of excitement. While Holi is very popular in India, the festival has been gaining popularity abroad as well. The festival is known by different names in various parts of India such as Fagu, Phagwah, Basant Utsav and Dol Jatra. No matter what you call Holi, this is definitely the most ‘fun’ festival of all!

Diwali – The Festival of Lights This festival is celebrated in the fall and is marked by a dazzling display of lights and fireworks! Diwali or Deepavali gets its name from the rows of clay lamps (deepa) that people light outside their homes to signify the triumph of light over darkness, and good over evil. Historically, Diwali celebrates the homecoming of the Hindu god Rama who returned to the city of Ayodhya after 14 years in exile. His people had lit up the city with thousands of lamps to welcome him and thus began the tradition of lighting lamps during Diwali!

Similar to Christmas in the US, people in India start Diwali preparations weeks and sometimes, months, in advance – shopping for new clothes, buying gifts for one another and preparing delicious sweets and meals. In some parts of India, the goddess Lakshmi (the symbol of wealth and prosperity) is worshiped during this time, while in some other parts, people worship the goddess Kali and celebrate Kali Puja. No matter where you go you will see homes lit with rows of diyas (lamps) while fireworks light up the skies! Entire neighborhoods gather together to light firecrackers and greet each other, creating memories that will last forever.

Durga Puja – Celebrating the Victory of Good over Evil Another fall festival, Durga Puja is best experienced in the eastern Indian city of Kolkata. According to mythology, there lived a demon, Mahisasura, who had received a boon that no man or god would be able to kill him. Considering himself invincible, he set about destroying heaven and earth until finally, he met his fate at the hands of the powerful ten-armed goddess, Durga.

This victory of good over evil is celebrated as the five day festival of Durga Puja. For the weeks and months leading up to the festival, artisans are busy at work, creating idols of the goddess, who will reside in pandals (temporary structures created throughout the city, specifically for the occasion) for the duration of the festival. On the first day, Shashti, everyone gathers in these pandals, waiting excitedly, for the idols to be unveiled, as the city reverberates with the sound of the dhak (drum). Over the next few days of Saptami, Ashtami and Navami, people throng city streets to visit numerous pandals, one more majestic than the next, to pray and partake in the festivities. It doesn’t matter if you are rich or poor, young or old; all these distinctions seem to melt away everyone prays together, decked in their best attire, their faces full of joy! During this time, you can find delicious Bengali food and sweets on every corner; while music and dance and even theatrical productions are a part of the festivities. As the festival draws to a close on Dashami (the last day), the sadness is palpable as people bid adieu to the goddess, realizing that they must wait another year for next year’s Pujo! Learn about Durga Puja in ‘Celebrate Durga Puja With Me!‘, the first book in the series ‘From The Toddler Diaries’.

Onam – The Harvest festival of Kerala The most important festival in the state of Kerala, this 10 day harvest festival is celebrated in August/September on a grand scale. Though it is rooted in Hindu mythology, Onam is a secular festival that is celebrated by one and all, the barriers of religion simply melting away during this time. According to legend, there once lived a mighty king called Mahabali, whose growing power made the gods very fearful and in order to teach him a lesson, Lord Vishnu decided to pay him a visit. Dressed as a young boy, he visited Mahabali who asked him what he wanted. The boy’s request was simple – all he wanted was land that he could cover in three steps. When the king agreed, the boy magically grew in size and covered all of the earth in one step, and all the heavens in his second. The king offered his head as the third step for he had no other land to offer. This last step pushed Mahabali into the netherworld but not before Vishnu granted him his last wish to visit his people once a year – this homecoming is celebrated as Onam.

Onam is marked with people creating beautiful flower arrangements (Pookalam) in their homes, while a variety of cultural events are held all over the state. People dress up in their finest and take part in folk songs, dances, parades and even sports! One of the highlights of the festival is the snake boat race (Vallam kali), which as the name suggests, involves races between giant, magnificent snake shaped boats. An elaborate feast, served on banana leaves (Onasadya), is prepared on the last day and marks the culmination of ten days of fun and festivities.

The above and other festivals are a great way for people from all walks of life to come together, forget their differences and create memories that will last a lifetime!

I would love to connect with you! 18 thoughts on “Durga Puja and the Festivals of India”