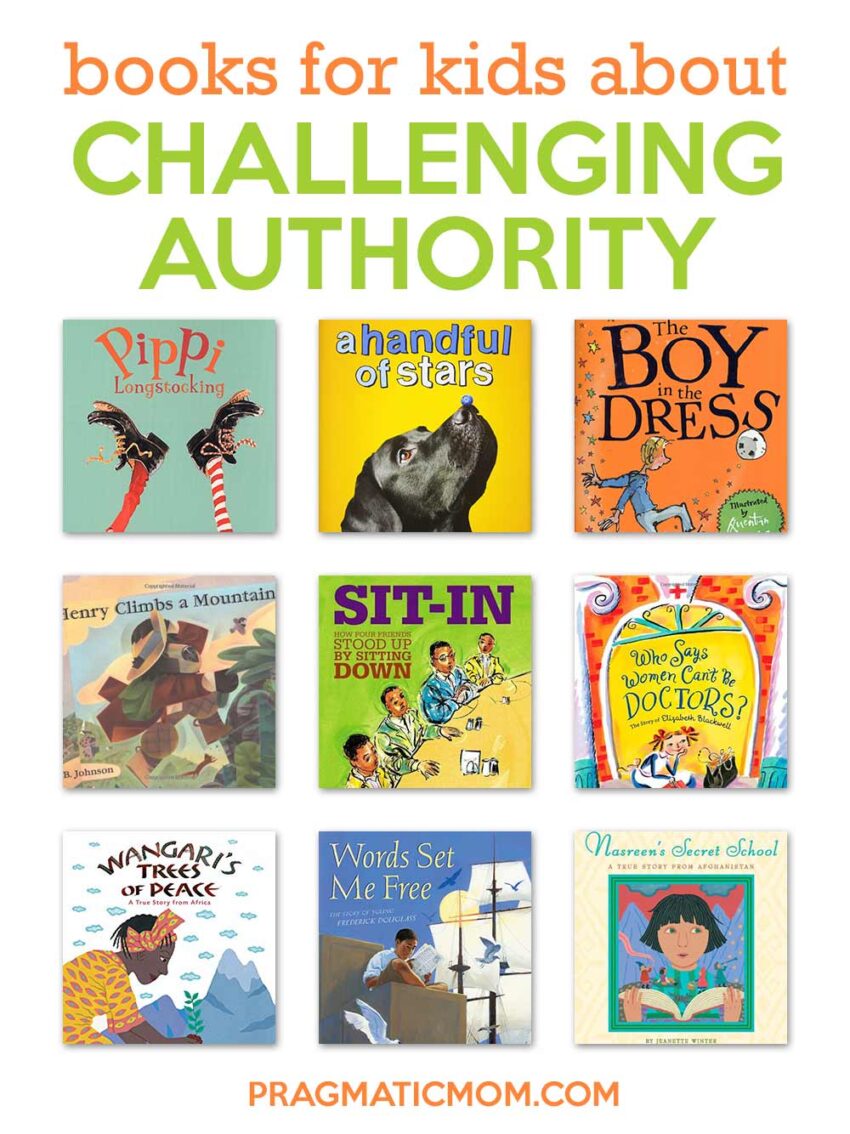 Teaching Your Kid How and Why to Challenge Authority

Challenge authority! Did you just feel a slither of uneasiness?

What parent wouldn’t? We’re the ones who have to get those kids into their beds when they don’t want to go. Ensure that some form of vegetable matter makes it down their throats. Frankly, I’d go stark raving mad if everyone in the family insisted on eating something different for supper.

What do you mean, it’s a good idea to give them examples of fictional and historical characters who challenged authority? Is that really a good idea? Do we really want our kids declaring the right to wear underwear on their heads during grocery store expeditions? Couldn’t we just hand them a nice bundle of books about authority and its challengers when they turn 18, and have signed leases on their first apartments?

Not when so many children will likely be on the receiving end of some over-reach of authority long before they become adults. The more privileged ones will only feel marginally constrained. The less-privileged will find their dignity, essential human rights, mental health, and bodily safety threatened as a result of interacting with enforcers of institutional rules, systems of “law”, and “consensus” on morals, ethics, knowledge, and “right” living.

So here’s a baker’s dozen books featuring fictional and historical characters who push back against unjust laws, knowledge assumptions, and constraining social norms.

After reading just a few of these, I guarantee that you’ll actually feel gratified and relieved when your growing changing reach-stretching kid challenges you to re-examine the necessity of some aspect of family law or custom.

Okay, well, AFTER you’re done feeling irritated because the latest regime change request/demand came five minutes before you have to flip the Airbnb suite, or catch the bus to the office, or before the babysitter is due to arrive to make all your semi-annual real partner date

A special note: Challenges to authority can yield beautiful leaps in rights, self-respect, opportunities, justice, scientific understanding, and artistic expression, but the cost can be steep. Challengers have been crushed emotionally, mentally, and bodily. As I found researching my NINJA LIBRARIANS books, there is a tremendously long heart-breaking list of people killed in the process of challenging authority. That has to be acknowledged. For this post, I chose books in which almost all of those who pushed back, survived. It’s up to parents, of course, to decide when it makes sense to talk about those stories with kids.

So. To the books, with a send-off from the Dalai Lama.

“The ultimate authority must always rest with the individual’s own reason and critical analysis.”

Yertle the Turtle by Dr. Seuss

I went back and forth between including Horton Hears a Who or Yertle the Turtle on this list. Both picture books (suitable for ages 3-103) feature characters contending with abusive authority. Yertle must deal with an autocrat literally squeezing the life out of his subjects, and Horton must deal with the peril of being an outlier, the only creature in a community who sees a reality that everyone else denies and faces threats from a “consensus” driven mob. [picture book, ages 4 and up]

This short chapter book is suitable for kids in the 5-12 range, and is one of the most enjoyable read-aloud books ever written! With gung-ho exuberance, Pippi matter-of-factly rejects do-gooders who think she’d be better off living in an orphanage than enjoying coffee with a horse out on her veranda, police officers sent to enforce the do-gooders wishes, and thoughtfully and hilariously, the norm of attending school. [middle grade, ages 8 and up]

A Handful of Stars by Cynthia Lord

Standing up to the members of one’s own community is one of the most difficult versions of standing up to authority. The two girls at its center live out a quietly beautiful tale of social justice and courage. Together, from their different positions in a small town’s society, they choose to challenge the implicit if unspoken racism/nativism that fuels resistance to accepting a migrant girl’s right to compete in a local pageant. [middle grade, ages 10 and up]

The Boy in the Dress by David Walliams

Possession of a position of authority guarantees nothing in terms of possession of ethics, rationality, or logical consistency. What happens when your preferences fly in the face of an authority’s arbitrary rules? [middle grade, ages 8 and up]

The House of Dies Drear by Virginia Hamilton

In this classic middle-grade novel (1968) – and terrific ghost story! – Thomas, a 13-year-old African-American boy – discovers up close and personally just what escaped slaves faced in trying to wrest their freedom from “authorities” who enforced slavery as moral and legal. [middle grade, ages 9 and up]

Henry Climbs A Mountain by D. B. Johnson (In part about Thoreau’s choice of Civil Disobedience)

Henry Climbs A Mountain by D. B. Johnson is one of five picture books exploring different aspects of Thoreau’s life and philosophy. This one touches on the thinking in Thoreau’s famous “Civil Disobedience” essay. In it, Thoreau outlined his reasons for breaking the law by not paying taxes to protest what he saw as an unjust war. A good book to jump-start a conversation about the possibility that one’s conscience might someday be at odds with obeying a law. Worth reading with older as well as younger kids. [picture book, ages 5 and up]

Sit-In: How Four Friends Stood Up by Sitting Down by Andrea Davis Pinkney

Over fifty years ago now, four African-American men challenged the authority of business owners by sitting down at a Woolworth’s lunch counter to protest “whites-only” service policies. Their courageous act set off a wave of sit-ins that led to wide-spread desegregation of lunch counters. [nonfiction picture book, ages 5 and up]

Who Says Women Can’t Be Doctors: The Story of Elizabeth Blackwell by Tanya Lee Stone, illustrated by Marjorie Priceman

Elizabeth Blackwell challenged the authorities occupying higher education’s leather armchair who had decreed that women were somehow “unfit” to practice as doctors, and therefore couldn’t attend medical school. Blackwell risked ridicule and anger to pursue her dream, and succeeded! [picture book biography, ages 5 and up]

After studying abroad, Wangari Maathai returned to Kenya, horrified at the deforestation that had taken place around her village. She challenged authorities on their policies, insisting that her people needed the area re-forested, and finding a way to do it. She was at one time thrown in jail for being a “troublemaker” and won the Nobel Peace Prize in 2004 for her perseverance in realizing her goals. [picture book biography, ages 5 and up]

Words Set Me Free: The Story of Young Frederick Douglas by Lesa Cline-Ransome

This is an interesting book for many reasons, but especially right for this list, because it focuses on the fact that Frederick Douglas courted serious danger/punishment by secretly learning to read when his “masters” in their “authority” forbade it. [picture book biography, ages 5 and up]

I got seriously choked up reading this true story. It packs an emotional wallop, as Nasreen, besides being deprived of the right to an education by the “authorities”, suffered the disappearance of her parents.  The chances the girls and their families take to stand up to the authorities by attending a secret school are breathtakingly valiant.  [picture book biography, ages 7 and up]

The true tale of a Chinese-African-Cuban girl who was told by her culture that she “couldn’t” pursue her desire to be a congo drummer in 1930s Cuba, because “girls don’t drum”. [picture book biography, ages 5 and up]

Kids On Strike by Susan Bartoletti

This non-fiction book is for middle school kids. It documents the stories of kids as early as the mid-1800s throughout the early 20th century who challenged employer authorities. They agitated, organized, and went on strike to protest dangerous working conditions, low pay, and other issues. [nonfiction chapter book, ages 10 and up]

GIVEAWAY of The Ninja Librarians: Sword in the Stacks

To win a copy of the Sword in the Stacks, please fill out the Rafflecopter below. I can only mail to the U.S.A. due to the high cost of shipping. So far in life, Jen has learned how to fail at growing broccoli, dismount a horse by sliding down its neck, and eat a piece of coconut pie with maximum possible pleasure, if not tidiness. The last skill comes in handy whenever she is haunted by that crushing post-apocalyptic episode of Twilight Zone in which the dude finally has the time to read all the books he wants, but then accidentally steps on his eyeglasses. Aaaaaauuuuugggghhhh!

Jen is hard at a work on the THIRD book in the NINJA LIBRARIANS series. She will never stop looking for lickable wallpaper.

The Ninja Librarians: The Accidental Keyhand

Some writers’ words get them in trouble. Some lybrarians with a “y” work secretly to protect them. Some lucky kids find out who they are.

Sword in the Stacks (Ninja Librarians 2)

Censorship, surly philosophers, insufferable anti-suffragists. But funny. And for kids. Dorrie, Marcus & Ebba are back! 13 thoughts on “12 Books For Kids That Challenge Authority & GIVEAWAY!”