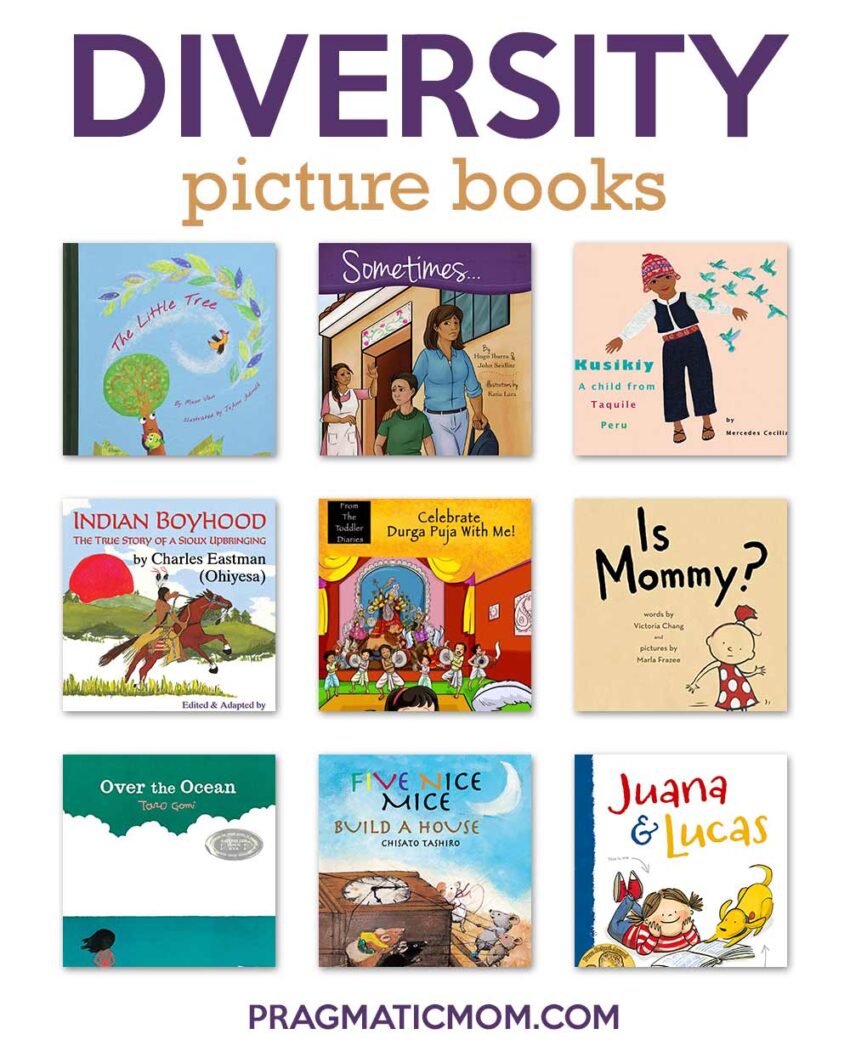 I’ve been collecting piles of new picture books and these twelve diverse picks stood out to me. How about you? What new diversity, multicultural, and inclusive picture books are you enjoying? Thanks for sharing!

Diversity Picture Book Most Likely To Win a Caldecott

*Sherman Alexie has been accused of sexual misconduct.

Sherman Alexie’s first picture book reflects on his Spokane Native American tradition of getting a new name to mark the transition to adulthood. There are 500 federally recognized tribal nations in the United States, each with its own diversity of language, ceremonies, and naming. To respect the deeper meaning of the naming, classroom activities where kids pick their own Indian names are not recommended as it is not culturally sensitive. This is a delightful picture book sure to engage kids. The vibrant illustrations by Caldecott illustrator Yuyi Morales perfectly match the story. [picture book, ages 4 and up]

The Little Tree by Muon Van, illustrated by JoAnn Adinolfi

Author Muon Van tells the story of her family’s exodus from Vietnam to escape the war in a parable about a tree sending her seed to a place that looked more promising than where she was. It’s a beautiful story of parental love strong enough to let the little seed go. [picture book, ages 4 and up]

Andrés and his mother live in San Felipe, Mexico. His father left to find work in Texas and sends money weekly to them until one day it stops coming and they don’t hear from him. To cope with this tragedy, his mom sends Andrés and his sister to live with their Aunt in Texas. Attending school is terrifying, but the teachers are kind and help them learn English. When their mom finally joins them, Andrés is finally convinced that what his teacher told him is true. He can make his dreams come true.

I’d pair this picture book with Pancho Rabbit and Coyote by Duncan Tonatiuh. Both picture books humanize the drama unfolding around Trump’s Build a Wall rhetoric. I also have a book list for Undocumented Immigrants in Children’s Literature if you need more books.

Wonderful Picture Books to Learn About Other Cultures

Kusikiy, A Child from Taquile, Peru by Mercedes Cecilia

Mercedes Cecilia has created a modern myth in the tradition of oral storytellers about a boy who brings the rain back to Taquile, Peru. Told in lyrical prose, this picture book reflects the connection the people of Taquile have to Mother Earth and their elders. This is a wonderful picture book to learn about Peru. [picture book, ages 6 and up]

Too Many Noodles by Sara Luna and Amy Eam

Lily and Peter visit their grandparents in China in time for the Chinese New Year. At first, they freak out about the new food they experience: hand-pulled noodles, chicken feet, preserved duck eggs, jellyfish, and durian. But by trying new things, they realize how fun it is to learn about their culture. [picture book, ages 4 and up]

Charles Eastman (Ohiyesa) was a well-known American Indian author living from 1858 to 1939. This picture book describes his childhood, born in a tipi in Minnesota, and raised in the traditional world of the Dakota Sioux until age fifteen. Eastman went on to enter the white man’s world. He became a medical doctor and co-founded the Boy Scouts of America. This is the story that he wants his own son to know about. The story of his childhood. [picture book, ages 6 and up]

Celebrate Durga Puja with Me! by Shoumi Sen, illustrated by Abira Das

It’s not easy to find a picture book about the Hindu festival of Durga Puja! It’s a celebration of the victory of Goddess Durga over the evil buffalo demon Mahishasura. From a kids’ point of view in South Asia, it’s also about getting new clothes, exchanging gifts, and eating delicious food. [picture book, ages 4 and up]

Is Mommy? by Victoria Chang, illustrated by Marla Frazee

I’m not sure if the mommy in this book has six kids, but, if so, they seem to be close in age, even possibly sextuplets. And so, these six kids set up the humor in this book. What is mommy like? Tall or Short? Pretty or ugly? Nice or mean? Fun or boring? Young or old? Neat or messy? You know kids. They speak their minds. But when you ask if they love their mommy, the answer is unanimous. Of course they do! [picture book, ages 2 and up]

Over the Ocean by Taro Gomi

Our first introduction to Taro Gomi years ago was Everyone Poops, a picture book that my kids repeatedly giggled through. I didn’t realize that Gomi has created more than 350 books so far!

From this author from an island country comes this picture book of wondering what lies beyond the ocean. With questions and musings that reflect perfectly what a child would think, use this picture book to imagine the world beyond what can be seen too. This book pairs nicely with Is Mommy? as both are full of questions. [picture book, ages 4 and up]

It’s time for five mice to find a new home. Their old neighborhood is getting scary. Two cats just moved in. They find a junkyard and build an extraordinary house. It has plumbing, a nap room, and a Ferris wheel powered by the wind. When a cat gets trapped in twine nearby, they have to make a decision. Free the cat or fight it? They help the cat; they are five nice mice after all! This is a picture book series. [picture book, ages 4 and up]

This is a delightful Early Chapter Book. Kids will delight in meeting Juana, a girl with strong likes and dislikes that everyone can relate to. She lives in Bogetá, Columbia and this is the year that her class starts learning English! It’s a fun twist to realize that kids in other countries might detest learning English as a second language. Juana spends a great deal of time trying to strengthen her case on why she doesn’t need to learn English which might sound familiar to kids in the United States who dislike learning foreign languages. In the end, Juana is motivated by a trip to an American theme park to applying herself to learning English. And it’s totally worth it!

Peppered with Spanish words and illustrated with charming cartoon illustrations, this is a fun way to introduce kids to Spanish! I hope there is a sequel brewing! Find this in bookstores in September 2016. [early chapter book, ages 6 and up]

Olinguito, from A to Z!: Unveiling the Cloud Forest by Lulu Delacre

Search alongside a zoologist for the elusive olinguito while exploring the ABCs of South American plants and animals residing in the cloud forest. This bilingual Spanish book uses alliteration, particularly on the Spanish language portion of the book. The English portion reads like lyrical prose. This is a wonderful way to learn Spanish AND explore the rain forest. The gorgeous illustrations make this armchair trip memorable. [picture book, ages 4 and up]