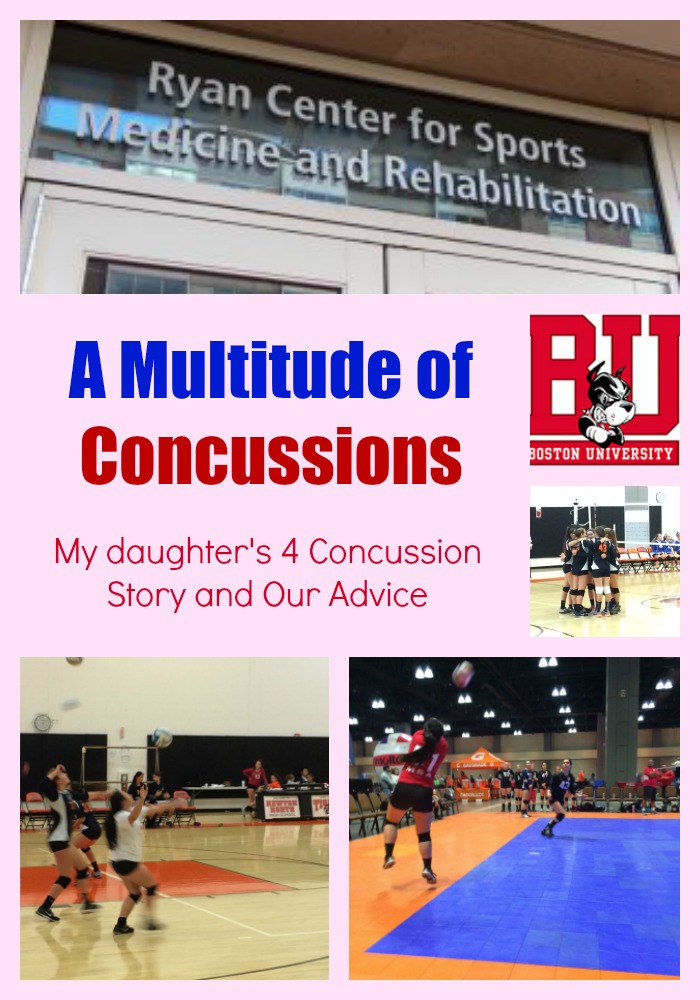 I’ve become well versed in teen concussions after my oldest, Grasshopper and Sensei, had four concussions over a period of fifteen months from club volleyball. Also, PickyKidPix had a soccer teammate with two severe concussions; her older sister had a concussion so bad that she had to quit soccer altogether. I’ve teamed up with that mom, Mary Lou, to bring you what parents should know about concussions in children and teens.

My daughter is number 9. She plays libero, a defense specialist. In retrospect, my daughter’s first concussion was a mild one that I didn’t realize was a concussion. She tried out for club volleyball team in December of 2015 where she took at least one hard ball to her head from girls serving the ball at high speeds. She had a headache for two days and then she was fine.  We didn’t go to the doctor at all.

Her head coach of her volleyball club team called me to tell me that she had failed his concussion test. He wasn’t the coach at her practice when she took a very hard ball to the side of her head that had shanked off a teammate. He noticed that she didn’t look quite right during practice and gave her the test. She wasn’t able to recall the words he’d given her in the correct order.

This was April 2015 at her MGA Club Volleyball practice. Her symptoms included memory loss, headache, and light sensitivity. She missed about a week of school but the following week was spring break. When she was home, she had to stay off screens and she was bored and restless. She cocooned for that week at home, unhappily.

During that vacation, she took an intensive 40-hour art class at Mass College of Art. My boxing trainer advised drinking a lot of water to help bring down the swelling in the brain. After her week of art class, she returned to school full time and seemed fine. When she took a ball to the head for her third concussion, it was probably January of 2016. Knowing that she would be isolated in her room and off screens, she opted to ignore it. I don’t think this concussion was severe but she suffered from headaches and light sensitivity. Since I didn’t know about it, she received no medical attention.
Her concussion may have contributed to a panic attack at school following a week off as a LIT counselor for Winter Camp. She was extremely sleep-deprived and stressed from school work. The week at camp didn’t allow her to catch up on sleep and it was also her happy place where she felt relaxed. When camp ended and school, once more, loomed ahead, she was a mess. Her dad and I thought it was the usual camp blues — these girls cry for days when camp ends, they miss it so much!
But she had a panic attack on the first Monday morning back, and we had to swiftly intervene with therapy. After ten days out of school, she was back to herself. It was the ten scariest days where she wasn’t herself but a scared shell of herself. She didn’t like being alone so we kept her busy, taking her to her appointments and on errands. After ten days, she returned to school and was back in the swing of things. During this time, we also got her glasses; her vision had changed slightly and she needed glasses for distance.

It was literally her first volleyball practice on March 9th, 2016 when she got what she says is the worst concussion of all four. She suffered from memory loss, headaches, insomnia, nausea, light sensitivity, loss of balance, and a shift in her vision. My friend, Head Soccer Coach at Boston College, recommended her team’s concussion specialist, Dr. Doug Comeau, who works at the Ryan Center for Sports Medicine and Rehabilitation at Boston University. We met weekly with him and also did twice a week concussion physical therapy with “Cam” James Camarinos. I highly recommend them both. The PT is meant to strengthen weak muscles and stretch out tight ones. The idea behind it is to do daily exercises that will help with concussion prevention in the future. Classes that required logical thinking like math, science, and Spanish caused headache flareups. Dr. Comeau said that was typical though they didn’t know the reason why. My daughter had trouble sleeping and subsequently, even making half days at school was challenging. She ended up dropping all but essential classes to graduate on time; she had been taking an overload of classes previously so she had enough credits.
Now, in August, she is still not cleared to play volleyball. Her symptoms have improved but only recently and not completely. We made sure that her Junior year in high school wasn’t too rigorous. She had to repeat Spanish, and we didn’t let her take Honors Biology even though she wanted to. She insisted on taking AP English which is probably her toughest class next year. We’re not sure if she will get headache flareups when school begins. You can’t really plan for these things; concussions take a long to heal, especially when there have been multiple ones. The effect can be exponential with each subsequent concussion.
If I were to give advice after going through all this, I would tell you to see a concussion specialist if your child’s symptoms persist for more than 2 days. Professional and college contact sports teams will have a concussion doctor so seek them out. Here are some things about concussions were helpful revelations to me: Image from University of Cambridge, via BBC. 20 thoughts on “A Multitude of Concussions”