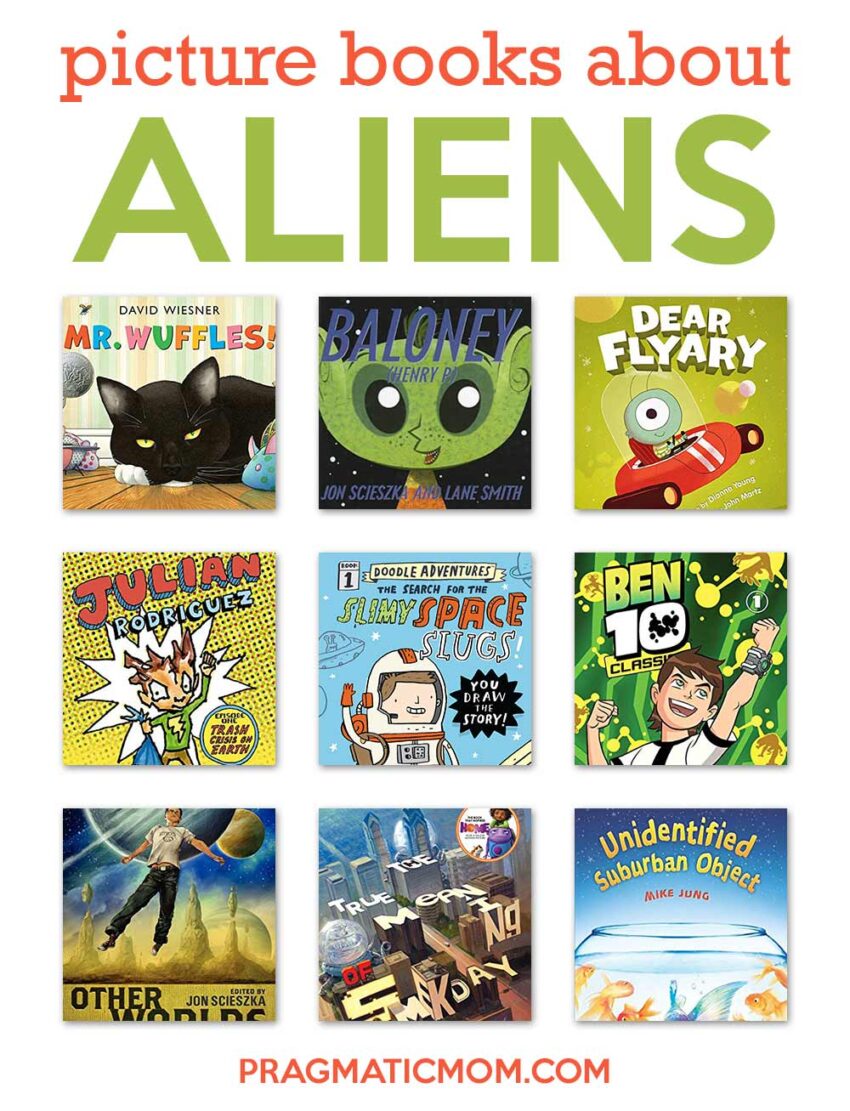 Check out these funny alien books for kids, perfect for a good laugh or an amusing story. Your child will think they’re out of this world!

Is it just us or are aliens funny?

I like the stories where the aliens are hanging out, living next door, and blending in with humanity. No one seems to notice that they are a little different. Alien invasions despite their superior technology and plan to dominate the world can also be humorous.

We like alien adventures in any book genre as long as they don’t take themselves too seriously.

My conclusion after making this list: there are not enough funny alien books for kids out there. Authors: please write more! They get kids reading.

It’s an alien invasion of very small aliens, and Mr. Wuffles, the family cat, is intrigued. This is far more interesting than the cat toys his family has been tempting him with! The aliens want to get away but they need to repair their ship after Mr. Wuffles used it as a toy.

The native insects are recruited for a double team against Mr. Wuffles and an escape plan is hatched. Who knew that aliens and insects speak the same language? [picture book, ages 4 and up]

Henry is late to school, but he has a very good, but elaborate, excuse. He needs to convince Miss Bugscuffle, his teacher to avoid permanent lifelong detention. He was delayed because of his zimulus, but it also involved a deski, torakku, razzo launch pad, pordo, the wrong buttuna and more aliens.

In the end, his zimulus saves him … and his lack of knowledge of physics. Good thing it’s tall tale writing today! [picture book, ages 4 and up]

Frazzle Pattzer from Merfatil writes in his flyary. He gets a spaceship for his dropday on 75 Red Moon 4851. At first, his spaceship sounds perfect but then it starts making strange noises. Wurpitz Hoolo’s Spaceship Repair, Wash, and Fillerup Station takes care of his ship.

When he finally gets a new one, he finds that he misses those old noises. Wurpitz knows what to do for that too. [picture book, ages 4 and up]

This is a personal favorite early chapter book series of mine. Julian Rodriguez is planted into an ordinary family as their son, but he’s really an alien in disguise collecting intelligence. He finds human habits odd, demeaning, and disgusting, from doing chores to eating carrot sticks.

Readers will find his perspective hilarious and parents will like the use of SAT vocabulary words. It’s a win-win for everyone, except Julian himself. [early chapter book series, ages 6 and up]

The Search for the Slimy Space Slugs by Mike Lowery

This is a novel idea … a graphic novel where the reader draws in the book to decide what happens in the story. Though these doodle adventures won’t work for a library, they make for fun summer reading (and drawing). [doodle graphic novel, ages 6 and up]

My son loved the Ben 10 TV cartoon so much that he also read the early chapter book series. Ben’s adventures on the small screen translate perfectly to books for young boys. [early chapter books, ages 7 and up]

Leonard (My Life as a Cat) by Carlie Sorosiak

“Leonard is not really a cat– he is just really a noncorporeal, 300-year-old space alien who is given a chance to experience life on Earth. After much research and reflection, he has decided to use his month in human form to be a park ranger in Yellowstone, but things go badly awry. Instead, he materializes in South Carolina during a flood and is saved by Olive. Olive is spending the summer with her grandmother, Norma, because her mother has taken up with a new boyfriend who isn’t that nice to Olive, and chances are good that Olive will have to move to California at the end of the summer. Olive takes good care of Leonard, but there is a big problem. Since Leonard only has a month on Earth, and he’s quite a distance from where he is supposed to be picked up by the other members of his race, he’s not sure how is going to get there in time. Of course, while he’s on Earth, there are things he wants to do, and once Olive realizes who he truly is, the two start working through Leonard’s bucket list. They manage to get into a movie theater and play board games, and the two spend plenty of time at a local aquarium in the company of Q, Norma’s friend who works there. Being a cat, and being Olive’s cat, has its advantages, but as time approaches to leave, Leonard knows that they are going to need a lot more help to get to Yellowstone. Q realizes that something is different about Leonard’s cat self, and is willing to help. An epic road trip is planned, Norma is brought in unaware, and the group sets off. It’s a tight schedule, but will they make it to Yellowstone in time to make contact?” [middle grade, ages 8 and up]

My son loves the Guys Read series which is a compilation of short stories of prominent children’s book authors meant to get boys reading. His favorite funny stories in this book are: Bouncing the Grinning Goat by Shannon Hale and The Warlords of Recess by Eric Nylund.

They are not to be missed! [short story anthology, ages 8 and up]

My son and I enjoyed this funny take on an alien invasion of the world. Eleven-year-old Gratuity “Tip” Tucci and her cat in search of her mother after aliens invade Earth and move the people to Florida. Her travel partner in crime is one of the aliens on the lam, J.Lo.

If things weren’t complicated enough, another alien species arrives who is even worse than the first one. Alien invasion, though with high stakes, has never been funnier.

Of all the middle grade books on this list, this is our favorite. If you want to see the movie, be sure and read the book first. The movie isn’t true to the book. [chapter book, ages 9 and up

There are references to Native Americans, however, that are problematic. [middle grade, ages 8 and up]

Here’s an update from Adam Rex with regard to an analysis by Debbie Reese on the Native American references.

Yesterday I posted a thread about my industry. In response, @debreese suggested I talk about my book The True Meaning of Smekday. It’s a funny alien invasion book, but it’s also intended as a satire and critique of colonialism. And I have regrets about it.

In my effort to write a satire and critique of colonialism, I made mistakes that undermined my message. Reese enumerated these mistakes better than I can here. I encourage you to read her reviews of my book and its sequel.

I like a chapter book with a surprise twist. This starts off as a Korean American story of Chloe Cho, your average Tiger Cub who plays violin well, gets good grades, and is an exemplary student. But then things change.

Why? I can’t tell you. But this is a twist on the Model Minority Asian American stereotype, and it’s funny to boot. [middle grade, ages 9 and up]

The Drake Equation by Bart King

If aliens from other planets were to visit us, would they study us like Jane Goodall studied the chimpanzees? What if the study of primitive humans on earth were a science project for a young (but advanced) being from another world? Would they be protective of us, the way Jane Goodall is of her chimpanzees?

These are not questions that Noah Grow has. He’s trying to get a glimpse of a few elusive birds, including the wood duck. And avoid Coby, the annoying school bully. But what starts as a quest for a bird sighting becomes something much, much more.

This of this adventure of Hoot + Aliens and be prepared to laugh. [middle grade, ages 9 and up]

“There are plenty of laugh-out-loud lines in this book, menacing but comical aliens, and plenty of adventure. These things, as well as the fast-paced plot, will make it appeal to young readers who always suspect that their best friend or sibling might, in fact, be a space alien. Teachers and librarians will like the book for its more philosophical themes of belonging, personal identity, and friendship. This is a great choice for fans of Rodkey’s We’re Not From Here, O’Donnell’s Space Rocks, or the old but utterly fabulous Space Race (2000) by Sylvia Waugh.” 8 thoughts on “Alien Books for Kids”