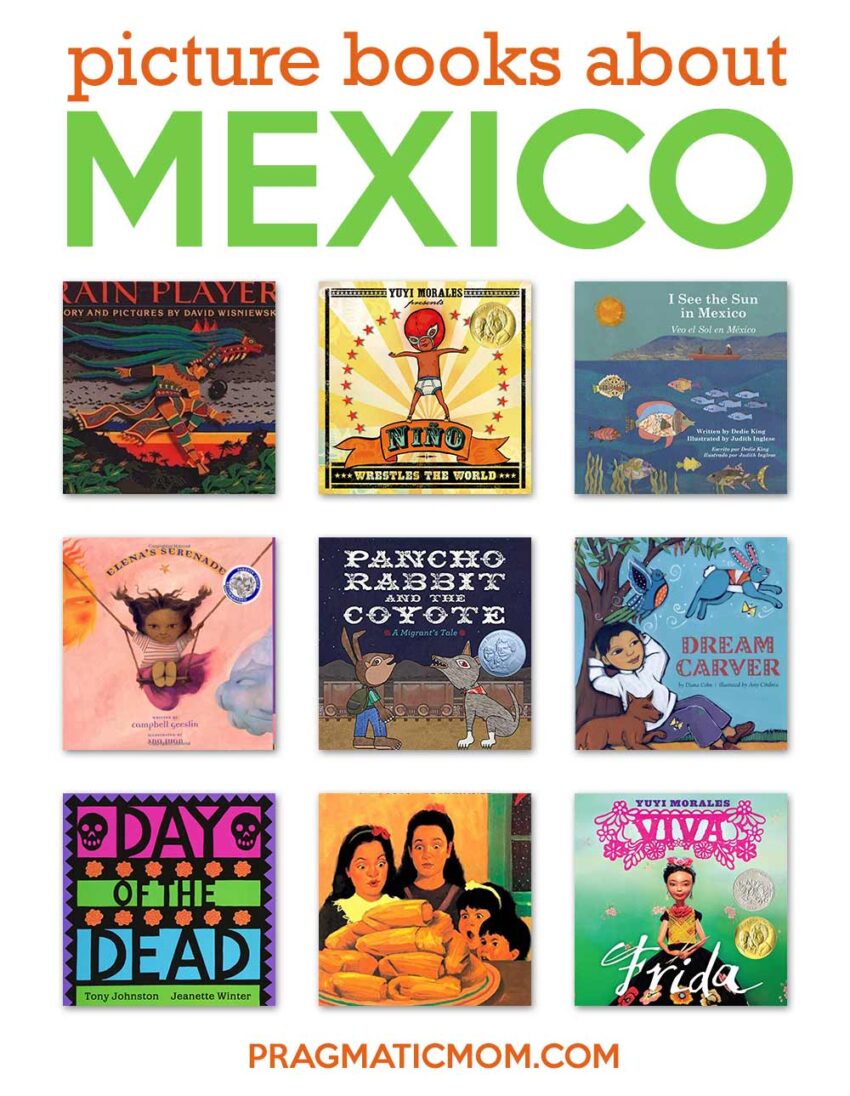 My kids studied Mexico in 2nd grade, a unit that was filled with crafts and excitement, including a Mexico Day Party. One of the student’s mother who teaches Spanish at the high school, even participated by dressing up as Frida Kahlo to teach the kids Spanish.

At the end of fifth grade, some kids still talked about Mexico Day. Apparently making guacamole was a highlight of their elementary school experience! This collection of picture books is meant for all years of elementary school. I noticed that our 5th graders studied the Ancient Mayans.

This reads like a folk tale but it’s actually an original story set in Maya civilization. A drought has been foretold. Chac, the god of rain, is displeased when a boy, Pik, speaks disrespectfully. To earn the god’s favor, Pik must win pok-a-tok, sending a five-pound ball of rubber through stone hoops on a walled court.

If Pik is defeated, he and his teammates will be turned into frogs. Pik appeals to the Jaguar, the Quetzal, and the sacred Cenote, who are all persuaded to join his team. Will Pik be able to make the rains fall? [picture book, ages 6 and up]

Learn about Lucha Libra, a professional style of wrestling meant to entertain and thrill. Niño takes on a few well-known fantastical Mexican icons: the Guanajuato Mummy, Olmec Head, Weeping Woman, and an Alien. Niño has moves to take down each one, but can he defeat his little sisters? [picture book, ages 4 and up]

8. I See the Sun in Mexico by Dedie King, illustrated by Judith Inglese

Set in La Paz, this depiction of modern-day Mexico, shows the day in the life of a family living by the sea. Luis’s father is a cook on a tourist boat and his mother makes and sells tortillas.

Luis helps his father by buying the food from the market and helping the tourists with their masks to snorkel in the beautiful sea full of colorful fish and sea lions. In both Spanish and English, this book gives readers a vignette of life in Mexico. [picture book, ages 6 and up]

Use this picture book to talk about magical realism that is often associated with Latin American literature. This is a story of a girl, Elena, who wants to blow glass like the talented artisans of Monterrey who can turn broken Coca-Cola bottles into vases.

Her journey to become a glassblower, an exclusively male industry, reminds me of a magical realism version of Mulan.  Girls everywhere will be inspired by Elena’s determination to learn to blow glass and the way she combines music to make it her own. [picture book, ages 4 and up]

6. Pancho Rabbit and Coyote: A Migrant’s Tale by Duncan Tonatiuh

Young Pancho wants to find his papa who is long overdue from traveling North in search of work. After packing his father’s favorite meal, he sets off and meets a coyote who offers to help for a fee. After the coyote consumes the food, Pancho realizes that the coyote is still hungry and makes his escape.

This is the perfect picture book to introduce the issue of undocumented immigrants and the perils that they face to children. [picture book, ages 6 and up]

Small wooden carvings of children’s toys and religious masks were created for hundreds, even thousands, of years by folk art artisans. But it was a shepherd named Manuel Jiménez who used a different kind of wood, and a different style of carving that made people from around the world want to collect these figures.

Use this picture book to illustrate an artist with a Growth Mindset. [picture book, ages 4 and up]

4. Day of The Dead by Tony Johnston

The rituals of Day of the Dead come to life in this charming picture book that follows a family all day as they prepare for this holiday. There are special foods to be made, fruit and flowers to gather, and candles to bring on this special day to honor the dead.

It actually spans three days, from October 31 to November 2, and is a time to honor one’s ancestors. [picture book, ages 4 and up]

3. Too Many Tamales by Gary Soto

Tamales are a time-consuming dish to prepare and are typically eaten to celebrate holidays like Christmas and Day of the Dead. For Maria, Christmas Eve started out so wonderfully as she helped her mother make tamales by kneading the masa.

But when her mother’s wedding ring disappears after Maria tries it on, the only way to find it is to eat all the tamales. Will the ring turn up?

For a peek into a contemporary Mexican American family, this gentle story conveys the strong bond between Maria and her extended family, and the food traditions that strengthen this connection. [picture book, age 4 and up] Use this award-winning picture book to introduce kids to Spanish words and the art and life of Frida Kahlo.

Though the text is brief and bilingual, use other resources like picture book Frida Kahlo: The Artist Who Painted Herself to fill in her life and then let the kids find these references in the gorgeous illustrations. [picture book, ages 2 and up]

1. Funny Bones: Posada and His Day of the Dead Calaveras by Duncan Tonatiuh

Born in 1852, José Guadalupe Posada became an artist credited with creating calaveras, the festive bony figures associated with the Day of the Dead. His calaveras drawings were also political cartoons that communicated his ideas to the Mexican people who couldn’t read.

p.s. Beneath the Stone: A Mexican Zapotec Tale by Bernard Wolf

I wanted to add this picture book which you can probably find at your library though it’s out of print. It gives a realistic peek into life for a modern-day Zapotec family in Oaxaca City, Mexico.

Six-year-old Leo wants to be a weaver, and he helps with the family business which begins by preparing the wool for yarn. Even though the Zapotec tapetes are famous in Mexico for their beauty and durability, business is not going well for Leo’s family.

Still, his family celebrates The Day of the Dead and other holidays. Soon, it’s time to go to market in the city, twenty-five days away. This year, sales are good, and even Leo’s small tapete which his father converted to a shoulder bag sells.

Kids will take in the small details of Leo’s life and might notice similarities to their lives such as the food he eats and how he plays. Picture books like these with photograph illustrations show us all how we are more similar than different. It makes the world a smaller place. [nonfiction picture book, ages 6 and up]

During WWII, a pilot squadron was created in Mexico — Air Fighter Squadron 201 or the Aztec Eagles — trained by the United States. Before they went into combat, they were asked by Mexico’s President for any special requests. Angel Borcanegra del Castillo stepped forward.

He asked for a school to be built in his hometown of Tepozlán, Morelos. This is the story of how of that squadron and how the first school in Tepozlán came to be. The book is a little dry, so it would appeal to kids who like nonfiction history fact books on war. [advanced nonfiction picture book, ages 8 and up]

8 thoughts on “10 Great Picture Books to Learn About Mexico”