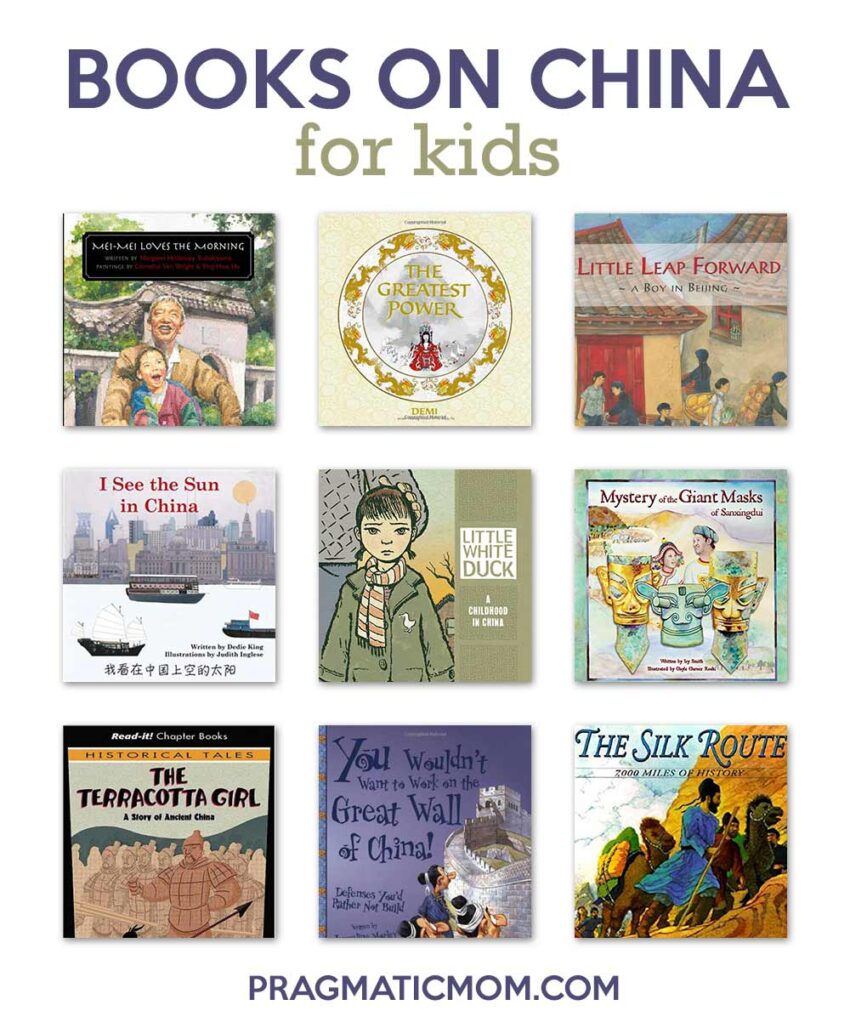 Discover the 10 best books on China for kids! Learn about Chinese culture and read children’s books with Chinese characters.

We’re creating a Multicultural Children’s Book Day eBook of diversity book resources. Twenty-two bloggers and authors are contributing their best diversity lists to help educators and parents find the books they need: All Done Monkey, Books My Kids Read, Crafty Moms Share, Colours of Us, The Educators’ Spin On It, Franticmommy, Growing Book by Book, Imagination Soup, InCulture Parent, The Jenny Evolution, Jump Into a Book, Kid World Citizen, Uma Krishnaswami, The Logonauts, Mama Smiles, Marie Pastiche, Elsa Marston, The Measured Mom, PragmaticMom, Randomly Reading, What Do We Do All Day?, and Youth Literature Reviews. Proceeds from this eBook coming out this fall will be used to donate books to teachers and parents.

At my kids’ elementary school, our second grade spends part of the year studying China. These are my favorite ten books to learn about China, both past and present. It’s a mix of nonfiction and fiction, and also different genres covering picture books, early chapter books, and graphic novels.

What books am I missing? Thanks for your suggestions!

Experience life in modern-day China with Mei-Mei, her grandfather, and her bird as they spend the morning biking through the streets of an urban city in China. The first stop is a chat with a cobbler on the street. Then, it’s off to the park for tai-chi.

The lao-bing man’s stall for pancakes is their last stop before heading home. Filled with multigenerational warmth, Mei-Mei’s sh0ws kids that life in other countries has the same gentle rhythms of eating, exercising, and playing as their own. [picture book, ages 4 and up]

9. The Greatest Power by Demi

In this sequel to The Empty Pot, Ping is now emperor and contemplates what the greatest power is. He calls for a parade so kids can present what they think it is. Could it be money, technology, beauty, or something else? China’s contributions in these areas are brought forth by the children.

This picture book introduces China’s inventions to the world, as well as a Chinese philosophy. [picture book, ages 4 and up]

The Cultural Revolution comes to life through the eyes of a young boy in this gentle easy chapter book about a difficult period in Communist China. [early chapter book, ages 8 and up]

7. I See The Sun In China by Dedie Smith

Told in English and Mandarin Chinese, this picture book shows the day in the life of a young girl and she travels from a small town in China to Shanghai to spend time with her aunt.

The contrast between life in a small village to that of a large modern city in China is wonderfully juxtaposed to give readers a sense of the different sides of life in China. [picture book, ages 5 and up]

This is a great way for kids to learn about everyday life in Wuhan, China in 1976. Set at the end of the Cultural Revolution, Na Liu tells her own story during the years China made great strides to modernize.

This graphic novel is about small moments seen through the eyes of a young girl, rather than the larger political upheaval. Her life was filled with small tender moments despite living on the cusp of great change. [graphic novel, ages 8 and up]

5. Mystery of the Giant Masks of Sanxingdui by Icy Smith

Discover the lost civilization of Sanxingdui in Sichuan Province, China, over 3,000 years ago. In 1986, the discovery of monumental bronzes in Sanxingdui was hailed as “The ninth wonder of the World”.

This picture book imagines what might have happened to the people who produced these astonishing bronze artifacts. [picture book, ages 6 and up]

4. The Terracotta Girl by Jessica Gunderson Terracotta soldier with his horse. Image from Wikipedia.

The Terracotta Army was discovered in 1974 by local farmers in Lintong District, Xi’an, Shaanxi province. These amazing lifelike sculptures depict the armies of Qin Shi Huang, the first Emperor of China.

3. You Wouldn’t Want to Work on the Great Wall of China!: Defenses You’d Rather Not Build by Franklin Watts

Qin Shi Huangdi, the Emperor who united China, built the Terracotta Army and The Great Wall, was known as a strong ruler who was also ruthless and cruel. Life during this time was very difficult for ordinary citizens.

The Great Wall — 1,800 miles on China’s northern border — was built by unlucky hundreds of thousands who toiled and died to build this wonder of the world. This is a fascinating and entertaining picture book that makes the reader grateful not to have built The Great Wall. [nonfiction picture book, ages 8 and up]

The Tang Dynasty, 618-906) was a high point in Chinese civilization, where silk was the most highly prized in the ancient Western world. Silk traveled the 7,000 trade route from China to Byzantium, a perilous journey across mountains, steppes, and deserts of Central Asia.

At each stop, silk is traded for other goods, specific to that area. Ideas too are exchanged, as people from different countries and religions cross paths. The ends notes are also fascinating, detailing more of the rich history of the Silk Road.

Pair this book with The Plant Hunters: True Stories of Their Daring Adventures to the Far Corners of the Earth

to find out how the silk industry spread beyond China. I also have a post on My Silk Road Heritage using another picture book, A Single Pebble: A Story of the Silk Road

1. The Magic Horse of Han Gan by Chen Jiang Hong

This picture book reads like a folktale but Han Gan really existed 1,200 years ago in China. He grew up impoverished but became a great painter of horses. Chen Jiang Hong painted the illustrations using the same technique that Han Gan used.

In this story, Han Gan’s talent is rumored to bring real horses to life from the images that he paints. A warrior asked for such a horse to fight the enemy at the gates. Han Gan’s horse was invincible and the warrior, while on his back, could not be hurt.

The warrior’s thirst for conquest saddened the horse and he threw the warrior off his back and ran off. The warrior searched for the horse, returning Han Gan. Mysteriously, one of his paintings had a new addition … the warrior’s horse. [picture book, ages 5 and up]

“In January 2020, Mei Wong is trying to navigate her life in Wuhan, China, after the recent death of her mother in a traffic accident. Both of her parents were busy doctors, so she also relies on her Aunt, who is the director of Yangtze Middle School, which Mei attends. …The neighbors in the building have a WeChat group that Mrs. Fong has put together, and are all taking care of each other. Food is a problem, especially after authorities put everyone in lockdown, and only those with volunteer passes can do shopping. Food is sent up in baskets, and the elderly and the very young who have ill adults are struggling with getting meals. … When Mei’s father collapses at work, there is a fear that he is ill with COVID-19. How will this change Mei’s life? [middle grade, ages 8 and up] 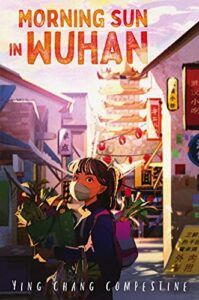 Flying Paintings: The Zhou Brothers: A Story of Revolution and Art by Amy Alznauer, illustrated by ShanZuo Zhou and DaHuang Zhou

The brother’s true-life story reminds me of the Chinese movie, To Live, and also the short story in Zen Shorts. Both illuminate that bad luck and good luck are difficult to interpret. Their story is one of art triumphing over the most difficult of times, the Chinese Cultural Revolution. They now live in Bridgeport, Chicago where they continue to make art and support a new generation of artists. [picture book biography, ages 5 and up]

Angel in Beijing by Belle Yang

Join a little girl on a charming romp through modern-day China, visiting Chinese monuments and historical sites as well as touching on Chinese holidays including Lunar New Year and Dragon Boat Festival.

The story revolves around a white cat that a little girl finds up in a tree, scared of the noise of the firecrackers. She rescues the cat and brings it home, naming it … “Kitty.” (That was not supposed to be a forever name!).

Kitty goes with the little girl as she traverses around Beijing on her bicycle. During Dragon Boat Festival, Kitty gets intrigued by a kite and takes off into the air as the kite is airborne. The little girl feels distressed to lose her cat.

She searches for her cat the next day all over the city. Finally, she happens upon a hutong (traditional Chinese house) where she hears a cat. To her surprise, there is Kitty! But now Kitty has a new name and the little girl realizes how Kitty has found someone who needs her. [Picture book, ages 4 and up.]

Cultural Revolution and My Dad’s Story