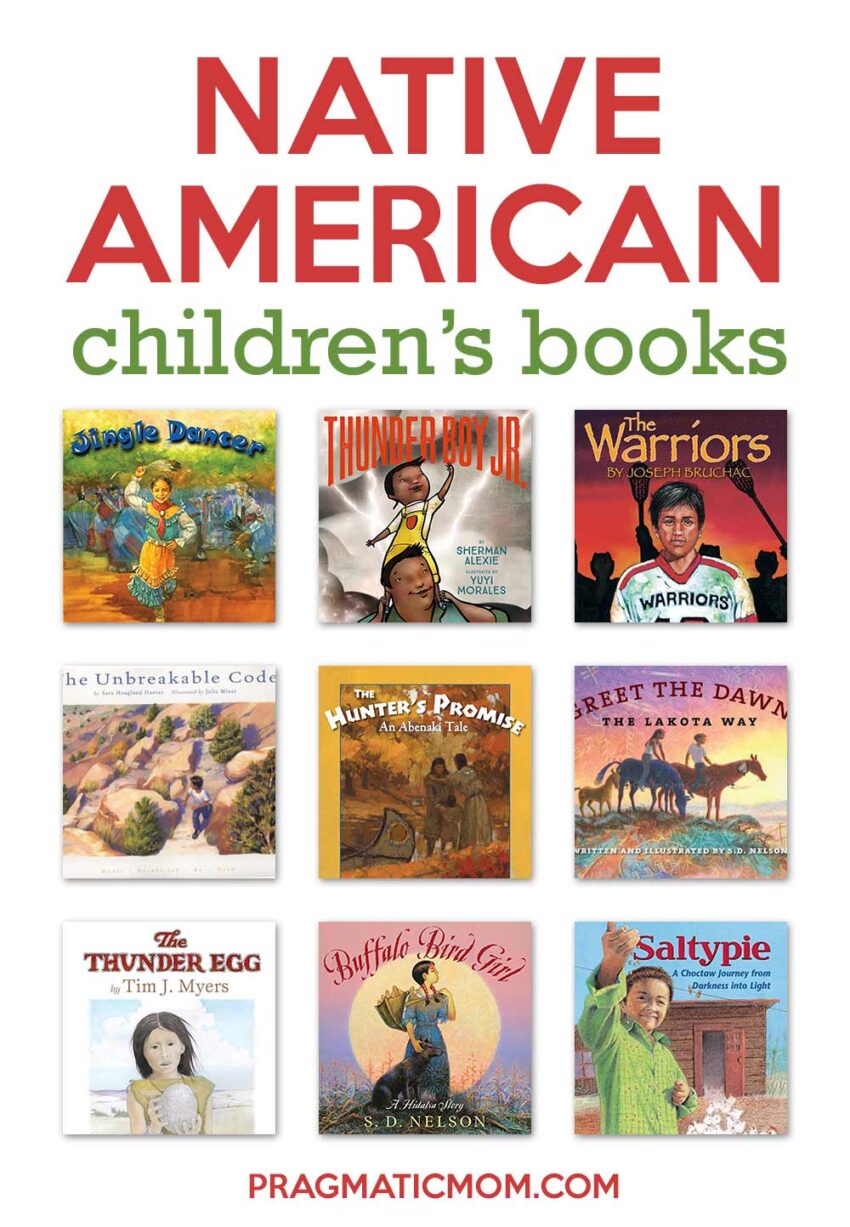 Inside: The best collection of Native American children’s books, perfect for learning about indigenous heritage, folktales and history!

I, along with Jump Into a Book, Franticmommy, am working on a Multicultural Children’s Book Day eBook of diversity, multicultural, and inclusive books lists from bloggers and authors including:

I’ll be contributing a few book lists to contribute and I’m updating them to reflect nuances that I’ve learned through my journey of blogging.

In the case of Native American books for children, I wanted to emphasize contemporary stories as some kids including my own, think that American Indians are a relic from the past.

*Sherman Alexie has been accused of sexual misconduct.

Sherman Alexie’s first picture book reflects on his Spokane Native American tradition of getting a new name to mark the transition to adulthood. There are 500 federally recognized tribal nations in the United States, each with its own diversity of language, ceremonies, and naming.

To respect the deeper meaning of the naming, classroom activities where kids pick their own Indian names are not recommended as it is not culturally sensitive. This is a delightful and funny picture book sure to engage kids.

The author is a mixed-blood member of the Muscogee (Creek) Nation.  In this contemporary story, a Native American girl turns to her family to help her find her dancing voice via rows of jingling ornaments for her special dance costume to be used at the powwow.  [picture book, ages 2-6]

8. The Warriors by Joseph Bruchac

Anyone who loves lacrosse should read this book. Did you know that lacrosse is a sacred game from the Iroquois? Set in contemporary Washington D.C., Jake leaves his Iroquois reservation to go to boarding school. Lacrosse is the bridge that crosses both worlds for Jake, but is it enough?  [chapter book, ages 8-12]

This the story of the Navajo Code Talkers of WWII, unsung heroes who created a code that the Japanese could not break. The war in the Pacific prior to this had gone poorly as the Japanese were ace code breakers, able to intercept, decode, and read every message from the United States military.

And yet the United States had begun a systematic purging of the Navajo culture, forcing young Navajo children to boarding schools where they were punished for speaking their own language. The irony! I have a Secret Code Book Club for Boys activity to go with this book. [picture book, ages 6 and up]

6. The Hunter’s Promise: An Abenaki Tale by Joseph Bruchac, illustrated by Bill Farnsworth

This traditional story is shared by many indigenous nations of the Northeast. It can be read on many different levels: it can be a story about loyalty, spirituality, and also the delicate balance of nature between hunter and prey. [picture book, ages 6 and up]

“Is not the sky a father and the earth a mother, and not are not all lving things with feet or wings or roots their children?” Black Elk (Ogalala Lakota)

The Lakota Way celebrates The Circle of Life with a gentle message about living in harmony. Lakota words are included in the songs the Lakota ancestors sang to the Great Spirit. This picture book works for all ages including preschool. [picture book, ages 2 and up]

Stands-by-Herself is different from other kids so she keeps to herself. She finds an odd gray stone that looks like a thunder egg which she brings back and wraps carefully. When a drought threatens her people, she sacrifices her egg on a high ridge.

With a crack of thunder, the egg shatters and releases a thunder bird, leaving behind a cracked geode. Her ministrations are rewarded and the rain returns. [picture book, ages 6 and up]

The Hidatsa people are still here, as are the Mandan and the Arikara where they remain one sovereign nation. Buffalo Bird Girl is a real person.

She shares her story living through extraordinary times from life in earth-mound lodges on the high bluffs on the Missouri River in permanent farming communities to being forced to relocate to Fort Berthold Indian Reservation in North Dakota.

Her life as a young girl is documented through period photographs as well as beautiful illustrations. This is a glorious picture book to learn how the Hidatsa people lived, what they ate, and how they played. It also is a great focal point for a conversation about a Native people who lived as farmers in permanent communities.

Why, then, were they forced to Indian Reservations when their way of life was similar to the settlers moving west? [advanced picture book, ages 8 and up]

2. Saltypie: A Choctaw Journey from Darkness into Light by Tim Tingle, illustrated by Karen Clarkson

Tim’s grandmother, a member of the  Choctaw Nation, moves from Oklahoma to Texas as a young mother where she is greeted while standing on her front porch with a rock thrown to her head. It cuts her eye, causing her to lose her vision. Tim’s father is two-years-old at the time.

While there is certainly anger and a desire for revenge, his grandmother redirects this energy with “Saltypie”, a term that means “bad things happen; let it go.”

Many years later, his grandmother undergoes successful eye transplant surgery, but the blessing she taught those around her is to see without eyes. [advanced picture book, ages 6 and up]

1. Thirteen Moons on Turtle’s Back: A Native American Year of Moons by Joseph Bruchac and Jonathan London, illustrated by Thomas Locker

In many Native American cultures, there a legend of how the world was created on the back of a giant sea turtle. Joseph Bruchac’s picture book goes further and describes how each of the thirteen moons of the year holds a story, reflected in the scales of the shell of a turtle.

He tells these stories, reflecting different Native American tribes and the rhythms of nature, in lyrical free verse poetry. [poetry picture book, ages 6 and up]

I Am Not A Number by Jenny Kay Dupuis and Kathy Kacer, illustrated by Gillian Newland

“If you don’t eat your meal at breakfast [lumpy porridge], they will serve it to you at lunch. And if you throw it up, you will have to eat the vomit.”

For over a century, the Canadian government forced First Nations, Metis, and Inuit children — some as young as four– into boarding schools run by religious institutions (Roman Catholics, Presbyterian, United, and Anglican churches).

Torture such as burning skin with hot metal was common. Children were called by assigned numbers rather than names. This is the true story of the author’s grandmother. The last residential school closed in 1996. Not until 2008 did the Prime Minister of Canada issue a statement of apology. [picture book, ages 4 and up]

Bilingual in both English and Navajo, this picture book feels like a folk tale telling the story of a young girl who breaks the family metate which she needs to grind corn into flour for bread. Browne imbues the story with Navajo culture, including food, homes, and the Navajo language.

The girl’s journey to get the metate fixed brings her to a Moccasin Maker, a Potter, and the mysterious Stone Cutter. All are kind to her, and she learns more about the sacredness of the grinding stone.

In the endnote, the ceremony of girls transitioning to women is called the Kinnaldá in which the grinding stone is a part of the celebration. [picture book, ages 6 and up]

The Star That Always Stays by Anna Rose Johnson

“Norvia’s family struggles in the early 1900s in Beaver Island. The father, who is Swedish, is very disappointed in his own life and works on fishing boats. He is frequently gone, leaving Norvia’s mother, who is of Ojibwe and Arcadian descent, to provide for her five children. After moving to Boyne City, Michigan, the parents divorce, and the family struggles to survive, with the older children, as well as a grandmother and great-grandmother, helping out… The one difficult part of the family arrangement is that the children have been told to keep their Native American background secret from everyone. The fact that Norvia’s mother is divorced also causes her a lot of problems; her best friend Helen’s mother thinks that it will adversely affect her social standing to be seen with Norvia.” [middle grade, ages 8 and up] 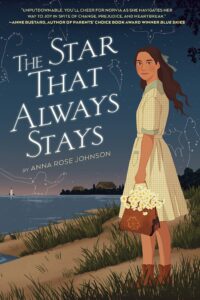 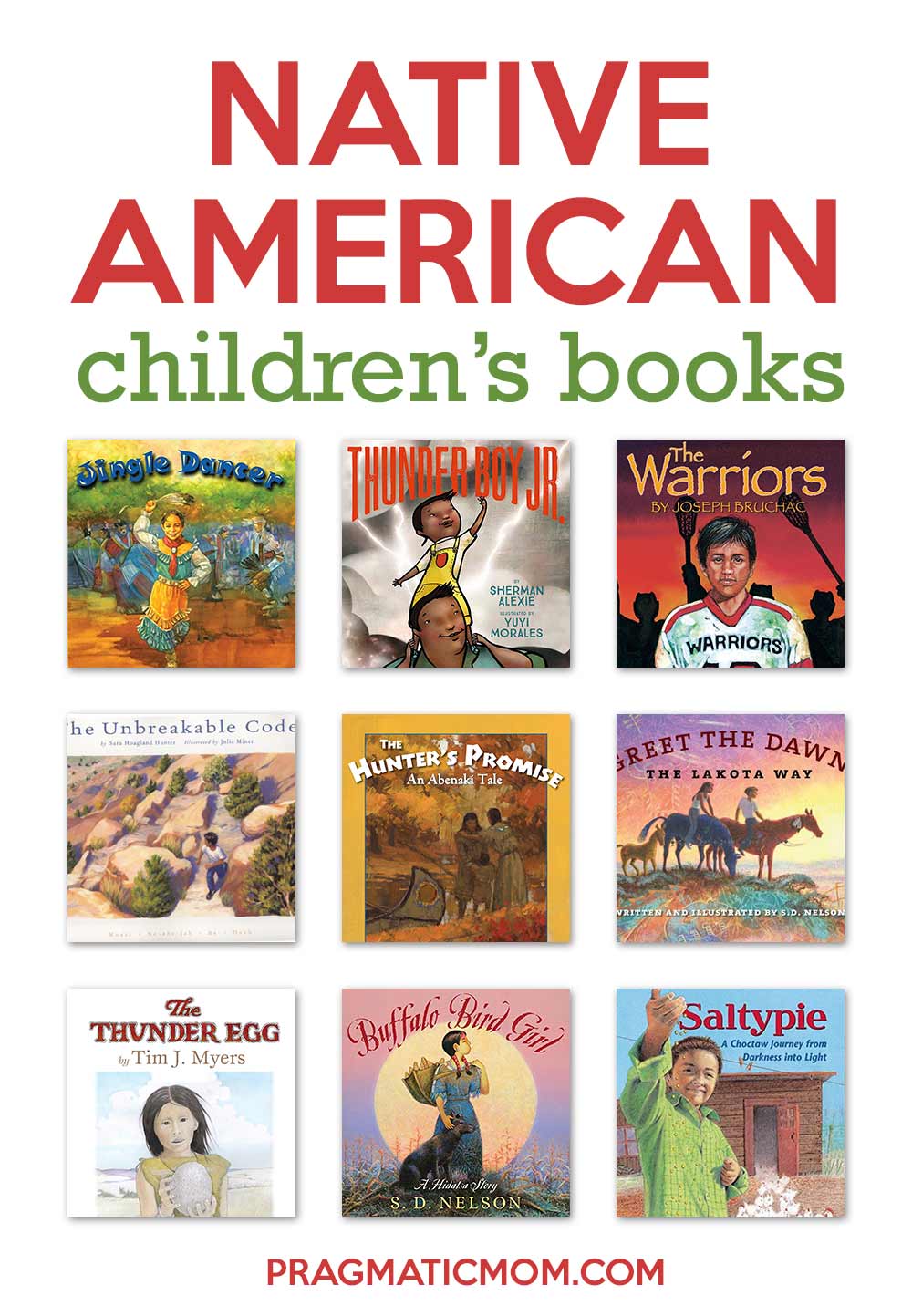 My first list was criticized by Debbie Reese, the preemient scholar on this topic, for including books that she did not feel accurately depicted the Native Americans. My response was to repost her great lists!