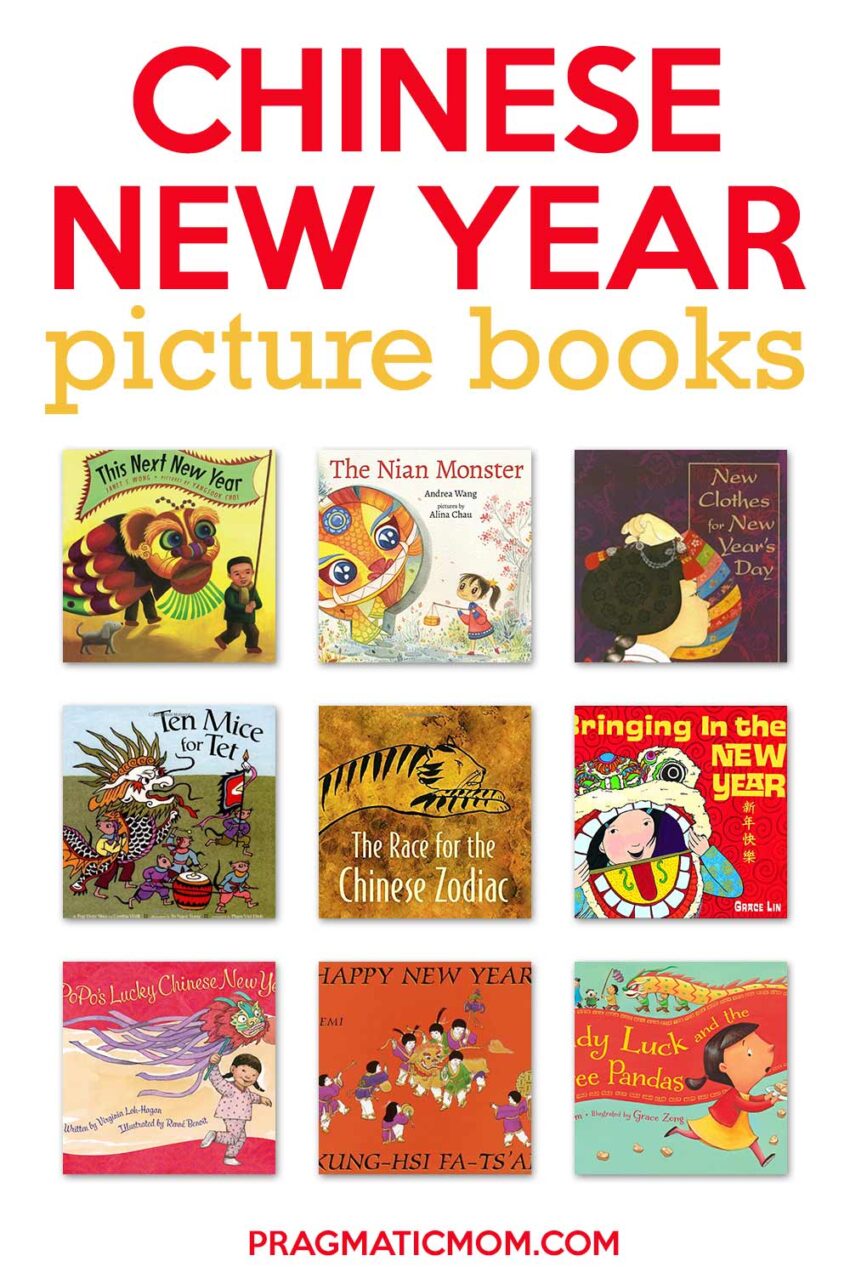 Inside: Read about the wonderful traditions, history, and fun stories with these Chinese New Year books for kids! Perfect for children to celebrate and learn.

Chinese New Year may be what most of us think of when we think of Asian New Year celebrations marked by dumplings, lion dances, new clothes, and feasts. I’ve included other Asian Lunar New Year picture books as well for those who want to explore further.

This Next New Year by Janet S. Wong, illustrated by Yangsook Choi

I love how the boy in this book is half Korean and half Chinese. This Next New Year is a multicultural, inclusive celebration with kids from different ethnicities celebrating Chinese New Year, each in their own way.

In this story, the boy and his family get ready for Chinese New Year by cleaning their home, hoping for a change in luck for the new year. And it’s so perfect that author Janet Wong is Chinese American, and Yangsook Choi, who did the illustrations, grew up in Korea. [picture book, ages 4 and up]

Alex shares her family’s Chinese New Year celebration with her best friend, Ethan. They watch the Chinese New Year and dragon dance. They help clean up and decorate the house and make dumpings.  Celebrating is great fun! They open red envelopes, eat an array of delicious food, and join the lantern festival! [picture book, ages 4 and up]

Sam and the Lucky Money by Karen Chinn, illustrated by Cornelius Van Wright and Ying-Hwa Hu

Sam isn’t sure how he wants to spend the lucky Chinese New Year money that he received. Shopping in Chinatown makes him realize that four dollars aren’t enough to buy the things that he wants.

But when he accidentally runs into a homeless man on the street, the stranger’s bare feet make him realize what he really wants to do with his money. [picture book, ages 4 and up]

Bringing in the New Year by Grace Lin

Grace Lin introduces the rituals of Chinese New Year to the youngest of readers. Join a Chinese American family as they get ready.

This celebration is marked by cleaning the house, putting up decorations on the walls, making dumplings, wearing new clothes, setting off fireworks, carrying lanterns in a parade, and watching dragon dancers.  [picture book, ages 3 and up]

Ernie and his family live in New York City’s Chinatown and he’s been practicing his Lion Dance for Chinese New Year. First, his family eats a huge feast to celebrate and soon, past midnight, it’s time to perform the dance.

The next morning is busy too. The lion dancers visit restaurants and stores to bring good luck blessings. They get red envelopes and sometimes even the dragon has to find it hidden in a bowl.

This is an excellent picture book for kids who might not have access to Chinatown to learn what life here is like for a contemporary boy and his family. [picture book, ages 4 and up]

Here’s footage of a lion dance in Boston’s Chinatown:

For Marisa’s family in Hawaii, celebrating New Year’s means her grandmother’s Korean dumplings! Now that she’s seven, she’s allowed to help make them. The entire Yang family arrives — aunties, uncles, and lots and lots of cousins. They play games all night waiting for the New Year.

When morning comes, it’s time for dumpling soup. Marisa’s dumplings may not look perfect, but they taste delicious. [picture book, ages 6 and up]

Koreans also celebrate the lunar new year. In this gorgeously illustrated picture book, a little girl gets dressed in new traditional clothes that her mother made her for the new year. Each piece has special significance with details including delicate embroidery.

Too Many Noodles! by Sara Luna and Amy Eam

Lily and Peter visit their grandparents in China for Chinese New Year. It’s a trip filled with discovering new food from hand-pulled noodles to chicken feet and durian. Through food, they discover their culture.

It’s a wonderful and delicious way to learn, but not for the faint-hearted! [picture book, ages 4 and up]

Chinese New Year is a month-long affair with fifteen days spent cleaning and preparing and fifteen more days celebrating. A young Chinese American girl helps her grandmother, PoPo, with this process. There is much to do!

First, they clean and prepare special foods. Noodles are for long life. A whole chicken is for the family to stay together. A fish with a head and tail means a good beginning and ending. Everything, it seems, has special significance.

Red keeps back luck away, but writing in red ink means that you want that person to go away! It’s so confusing! The lucky red envelopes are her favorite part of Chinese New Year. Getting them in pairs doubles the luck but the number four is to be avoided at all costs.

And hardest of all is to avoid bad thoughts. Chinese New Year with grandmother is really enlightening! [picture book, ages 6 and up]

The Chinese New Year traditions come from the folk stories of the Nian monster who wakes at Lunar New Year and attacks villages. In this version, Virginia Loh-Hagan chose to make the Nian monster an evil dragon (though Chinese dragons, unlike Western ones, are auspicious).

Mei, a young girl, born in the year of the Golden Dragon, is chosen to defeat the Nian monster. With the help of a magical warrior, she uses her wits to keep her village safe from the Nian monster. [picture book, ages 4 and up]

The Nian Monster by Andrea Wang, illustrated by Alina Chau

The ancient legend of the Nian monster gives background to why Chinese New Year is celebrated with the color red, loud noises and fire.

XingLing knows about the Nian Monster but is shocked to see it appear in Shanghai, ready to devour her and her city. She uses her wits to outsmart the Nian monster. The special foods used to celebrate Chinese New Year also have a role to play in defeating the Nian monster. [picture book, ages 4 and up]

For those readers who like a touch of fantasy with a Lunar New Year dragon dancer story, fits the bill. Yao, a dragon dancer boy, awakens an ancient dragon, Shen Long, and together they remove the bad luck from a shopping mall through an inspired dragon dance celebration. [picture book, ages 4 and up]

D is for Dragon Dance by Ying Chang Compestine, illustrated by Yongsheng Xuan

Use this picture book for preschoolers and kindergarteners to teach them about Chinese New Year and the alphabet! There’s also a dumpling recipe in the back. Chinese calligraphy from different dynasties is also embedded in the illustrations like a secret message! [alphabet picture book, ages 2 and up]

Tet is the Vietnamese New Year celebration which is also a lunar new year holiday. This picture book is also a counting book, covering the preparations and celebration of Tet from planning a party to feasting and dancing. Endnotes give more background on Tet.

Pair with D is for Dragon Dance for counting and the alphabet. [counting picture book, ages 2 and up]

The Race for the Chinese Zodiac by Gabrielle Wang, illustrated by Sally Rippin and Regine Abos

How did the twelve animals come to be selected for the Chinese Zodiac? Thirteen animals race for one of twelve spots and how each animal performs determines their place in the Zodiac. Did you know that each person born under a particular animal is attributed to certain personality aspects?

It’s based on the character of each animal as evidenced by how they behaved during the race. This picture book also explains why cats hate rats! [picture book, ages 4 and up]

Did you know that the twelve animals of the Chinese Zodiac are ascribed with certain personality traits just like Astrological signs? This picture book describes the traits, professions, and financial skills of each of these twelve signs. [picture book, ages 9 and up]

It’s also time to get a new haircut and new clothes. Visiting family and friends and bringing gifts is also a big part of the holiday. Use this picture book in conjunction with one about how families celebrate Chinese New Year. [picture book, ages 5 and up]

There are shades of Jack and the Beanstalk and the Gingerbread Man in this fun fractured fairy tale that is actually based on a Danish folktale.

The Li family is the richest family in Beijing, cheating every one of their money. When Ming trades eggs for a rusty wok, fortunes change hands due to this magical runaway wok. It even cleans up corruption! [fractured fairy tale picture book, ages 4 and up]

Goldy Luck and the Three Pandas by Natasha Lim, illustrated by Grace Zong

In this riff on Goldilocks and the Three Bears, Goldy Luck is a Chinese American girl who upsets her panda family neighbors.

She eats their congee, sits in their chairs, and messes up their beds. Her conscience gets to her and she returns to make amends, just in time to help the pandas celebrate Chinese New Year. This is a fun picture book for kids to compare with the original fairy tale. [picture book, ages 4 and up]

Use the historical narratives to introduce a unit on China in the classroom. It’s also great for introducing kids to Mandarin Chinese. This is a treasure trove of craft projects celebrating Chinese culture! [nonfiction, ages 4 and up]

Each section explains the holiday, tells stories related to it and offers at least one activity and one recipe. [picture book, ages 4-8]