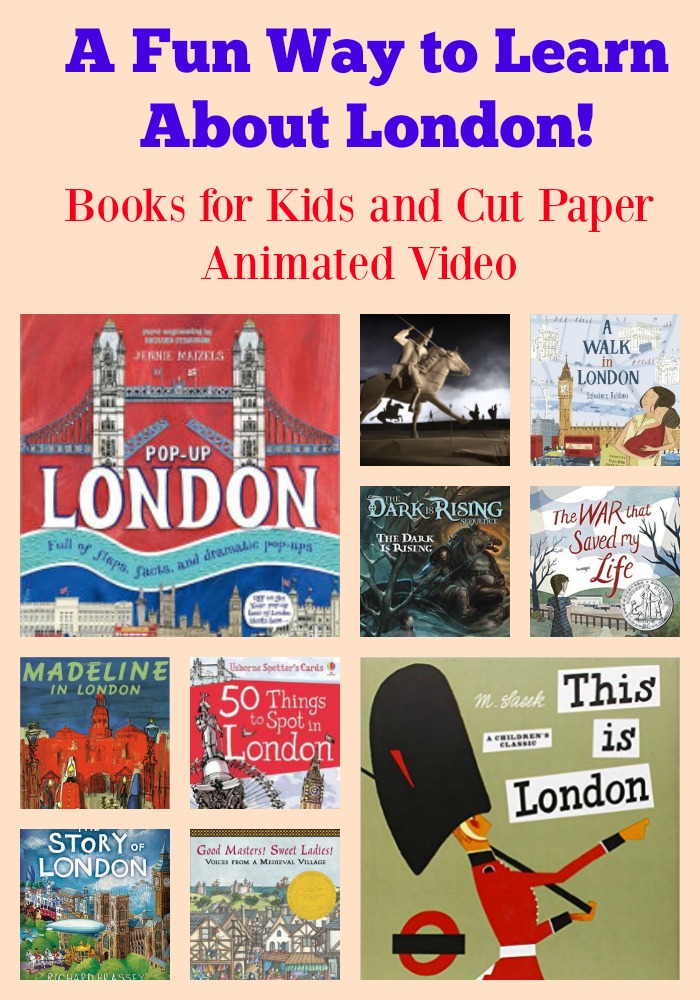 This cut paper animation video of the history of London amazed me … and prompted this list. I’ve been to London for a short trip before I had kids, but it’s on my list to visit again! How about you? Have your kids been to London? If so, would they like these books?

All the sights to visit in London are highlighted in this beautifully designed picture book. Use the index at the end to get more history on each landmark. [picture book, ages 2 and up]

This is London by Miroslav Sasek

Starting one thousand nine hundred years ago, Sasek traces the history of London through its architecture and monuments. This picture book is like having your own personal travel historian taking you through the sights of London. Read it with your kids before a trip to London, after a trip to London, or just to armchair travel to London! [picture book, ages 6 and up]

A Walk in London by Salvatore Rubbino

There’s a foldout Thames panorama map inside that really helps put every London landmark in place. In fact, this is the perfect picture book for learning your way around London’s tourist sites on feet. I also like how each page spread is sprinkled with factoids about each site in fine print. You can read them if you want the detail, or skip them if your child is impatient to get on. It covers Westminister’s Big Ben, St. James’s Park, Buckingham Palace, Trafalgar Square, Convent Garden Plaza, The City, St. Paul’s Cathedral, Threadneedle Street, The Monument, Tower of London, and all the sights noted around The Thames. [picture book, ages 4 and up]

Katie in London by James Mayhew

In Trafalgar Square, the great lions surround the statue and one comes to life and plays tour guide for Katie and Jack while their grandmother naps. Imagine traveling via lion! The lion takes them to St. Paul’s Cathedral, The Tower of London, The Tower Bridge, The Globe Theatre, the London Eye, Big Ben, the changing of the guard at Buckingham Palace, Harrods, and back to Trafalgar Square via double-decker bus. This is a fun overview of London sights even if there are no plans to go there in person anytime soon. [picture book, ages 4 and up]

Madeleine in London by Ludwig Bemelmans

Madeleine and her friends are invited to visit Pepito in London. As a gift, they give him a retired horse from the Queen’s Life Guards. With Pepito and Madeleine on his back, the horse takes off on an adventure in London. [picture book, ages 4 and up]

I personally would not have thought that Medieval short free verse poems would be exciting, but then it did win a Newbery award. So I read it. And the drama of life in a manor in 1255 England is riveting. Did you know that everyone hated the miller? The peasants were forced to get their grain milled at the local miller who invariably stole from them. Even the nobles had woes; the knight who went bankrupt to fight in the Crusades, the lord’s nephew who was scared during the hunt, and the lord’s daughter whose dress is ruined by feces thrown at her. Each of the 17 short plays tells a story illuminating life during this time with page spreads that detail background history. I honestly could not put this down! [22 vignettes in free verse, ages 10 and up]

The Dark is Rising series by Susan Cooper

I love The Dark is Rising series, a five-book contemporary fantasy series that draws upon legends of King Arthur, as well as Celtic and Norse mythology in an epic Good versus Evil adventure. Two of the books won Newbery recognition. [chapter book series, ages 10 and up]

The War That Saved My Life by Kimberly Brubaker Bradley

Set during WWII in London, nine-year-old Ada ends up in the countryside to avoid the bombing by the Germans. This is the first time Ada has left her cramped one room apartment because her abusive mother is ashamed of her club foot. Under the care of Susan Smith, Ada and her little brother Jamie thrive. But when the war ends, will they have to return to their mother? [chapter book, ages 9 and up]

Books for Kids While Visiting London

I like this multi-purpose paperback book. It’s light for kids to carry in their own backpacks. They can color and draw in the book while learning about London. Perfect for the plane ride to London and for entertainment while waiting in restaurants. Plus, it’s helpful for planning your London excursions. [coloring guidebook for kids, ages 6 and up]

Pop Up London by Jenny Maizels

The five pop up spreads follow the river Thames and it winds through London. It’s full of fun ghostly under Life the Flaps like the Most Haunted Bed in Britain, the ghost at Buckingham Palace, Westminster Abbey’s friendly ghost, the ghost of Saint Paul’s, and the ghost at the Tower seen carrying her head! The pop-ups of London’s most famous architectural sites are fun to view in this 3D state! [pop up picture book, ages 4 and up]

50 Things to Spot in London by Usborne

Use this set of 50 pocket-sized cards as a London scavenger hunt for your young tourists. Each of the cards detail fifty of London’s famous landmarks with an illustration and details about it. You can also search for other things to find nearby including the nearest Underground stations. There are also two cards that give a brief history of London. Parents can pull the cards to be used for each day. It’s a nice way for kids to get involved with planning activities for your trip to London. [cards, ages 6 and up] 6 thoughts on “A Fun Way to Learn About London!”