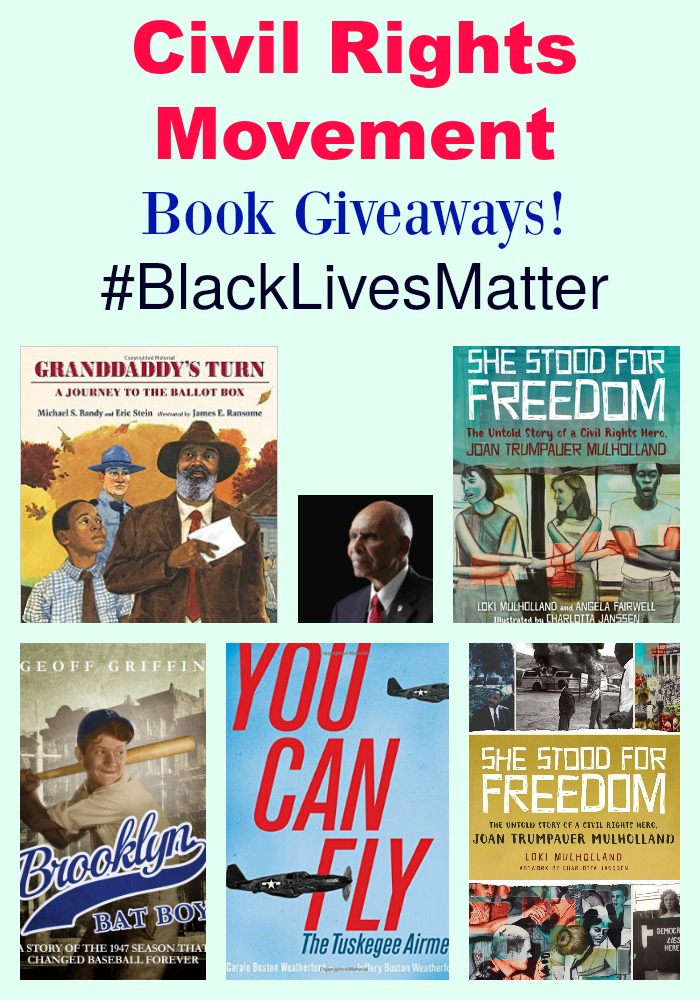 I’ve been seeing tweets about the Tuskegee Airmen that have been passing away. NPR has an article on Roscoe Brown: Remembering Tuskegee Airman Roscoe Brown, Educator And Civil Rights Trailblazer. He recently passed away in July at age 94. I wouldn’t have noticed the tweets, had I not been fortunate to read Carole Boston Weatherford’s excellent novel in verse You Can Fly, about the role the Tuskegee Airmen played in the Civil Rights Movement. I consider them the Jackie Robinson(s) of aviation.

I wouldn’t have read You Can Fly, had I not been fortunate to meet Carole at a book event for Voice of Freedom: Fannie Lou Hamer; The Spirit of the Civil Rights Movement.

In the serendipitous way that we are all connected, I ended up with this small but wonderful collection of Civil Rights Movement gems. In light of the police violence recently, I also wanted to highlight the letters Asian-Americans have penned to teach those around them that #BlackLivesMatter. We all need to stand together on that!

We need to talk.

You may not have grown up around people who are Black, but I have. Black people are a fundamental part of my life: they are my friends, my classmates and teammates, my roommates, my family. Today, I’m scared for them.

This year, the American police have already killed more than 500 people. Of those, 25% have been Black, even though Black people make up only 13% of the population. Earlier this week in Louisiana, two White police officers killed a Black man named Alton Sterling while he sold CDs on the street. The very next day in Minnesota, a police officer shot and killed a Black man named Philando Castile in his car during a routine traffic stop while his girlfriend and her four-year-old daughter looked on. Overwhelmingly, the police do not face any consequences for ending these lives.

This is a terrifying reality that some of my closest friends live with every day.

Even as we hear about the dangers Black Americans face, our instinct is sometimes to point at all the ways we are different from them. To shield ourselves from their reality instead of empathizing. When a policeman shoots a Black person, you might think it’s the victim’s fault because you see so many images of them in the media as thugs and criminals. After all, you might say, we managed to come to America with nothing and build good lives for ourselves despite discrimination, so why can’t they?

I want to share with you how I see things.

It’s true that we face discrimination for being Asian in this country. Sometimes people are rude to us about our accents, or withhold promotions because they don’t think of us as “leadership material.” Some of us are told we’re terrorists. But for the most part, nobody thinks “dangerous criminal” when we are walking down the street. The police do not gun down our children and parents for simply existing.

This is not the case for our Black friends. Many Black people were brought to America as slaves against their will. For centuries, their communities, families and bodies were ripped apart for profit. Even after slavery, they had to build back their lives by themselves, with no institutional support — not allowed to vote or own homes, and constantly under threat of violence that continues to this day.

In fighting for their own rights, Black activists have led the movement for opportunities not just for themselves, but for us as well. Many of our friends and relatives are only able to be in this country because Black activists fought to open up immigration for Asians in the 1960s. Black people have been beaten, jailed, even killed fighting for many of the rights that Asian Americans enjoy today. We owe them so much in return. We are all fighting against the same unfair system that prefers we compete against each other.

When someone is walking home and gets shot by a sworn protector of the peace — even if that officer’s last name is Liang — that is an assault on all of us, and on all of our hopes for equality and fairness under the law.

For all of these reasons, I support the Black Lives Matter movement. Part of that support means speaking up when I see people in my community — or even my own family — say or do things that diminish the humanity of Black Americans in this country. I am telling you this out of love, because I don’t want this issue to divide us. I’m asking that you try to empathize with the anger and grief of the fathers, mothers and children who have lost their loved ones to police violence. To empathize with my anger and grief, and support me if I choose to be vocal, to protest. To share this letter with your friends, and encourage them to be empathetic, too.

As your child, I am proud and eternally grateful that you made the long, hard journey to this country, that you’ve lived decades in a place that has not always been kind to you. You’ve never wished your struggles upon me. Instead, you’ve suffered through a prejudiced America, to bring me closer to the American Dream.

But I hope you can consider this: the American Dream cannot exist for only your children. We are all in this together, and we cannot feel safe until ALL our friends, loved ones and neighbors are safe. The American Dream that we seek is a place where all Americans can live without fear of police violence. This is the future that I want — and one that I hope you want, too.

With love and hope,

I’m giving away 3 copies of the early chapter book, She Stood for Freedom: The Untold Story of a Civil Rights Hero Joan Tumpauer Mulholland. Please fill out the Rafflecopter at the bottom to win 1 of 3 copies. Brooklyn Bat Boy: The Story of the 1947 Season That Changed Baseball Forever by Geoff Griffin

Bobby Kelly is the batboy for the Brooklyn Dodgers the year that they sign Jackie Robinson. His job is to help Jackie, the same as the other players, and he has to accept the idea of having an African-American play for his beloved team. As he gets to know Jackie, though, he grows to respect him, as a player, and as a person. The first season is a pivotal one for the Dodgers and Bobby begins to realize the uphill fight that Jackie Robinson faces, from the taunting in the stands, to the death threats. This is a perfect chapter book for kids who love baseball and are learning about The Civil Rights Movement. History has never felt so real! [chapter book, ages 8
and up]

Granddaddy’s Turn: A Journey to the Ballot Box by Michael S. Bandy and Eric Stein, illustrated by James E. Ransome

While this one family’s experience in the struggle for voting rights during civil rights era South, it reflects the struggles of many. Michael’s granddaddy was a big strong man who waited patiently for the day he could vote. When that day comes, he takes his grandson, his camera and dresses in his Sunday best. A deputy denies him his right with a literacy test, an unethical method of voter suppression. His grandson vows on the way home that he will vote for him one day. Now, after his grandfather has long passed away, Michael takes his photo from that day together with him to the ballot bot. Finally, it’s grandfather’s turn. [picture book, ages 6 and up]

Carole Boston Weatherford’s novel in verse tells the story of the Tuskegee Airman, the pioneering African-American pilots of World War II and of life for blacks during this time. Jim Crow laws permeated the military during this time; the SS Mariposa actually had a rope to separate black soldiers from white. But it also curtailed training and leadership opportunities for African Americans, both male and female. Top brass claimed that blacks for not fit to fly.

Of the more than 400,000 pilots trained by the Civilian Pilot Training Program, only 2,000 were black; less than half of a percent. With tremendous pressure to prove their worthiness,The Tuskegee Airmen earned 900 plus medals including Distinguished Crossed, Bronze Stars and Purple Hearts. Their accomplishments paved the way for full integration of the U.S. military. [novel in verse, ages 9 and up]

She Stood for Freedom: The Untold Story of a Civil Rights, Joan Tumpauer Mulholland by Loki Mulholland and Angela Fairwell, illustrated by Charlotta Janssen

You can never go wrong by doing what is right. It might not be easy, but it is always right.

Joan was 10 years old when she saw a black schoolhouse that was nothing like the brand new brick school for white children. It was at this moment that her path to becoming a freedom fighter began. She was unusual in that she was white and from the South, fighting for Civil Rights. She, too, marched in demonstrations, sat at hostile lunch counters, and served time in jail. She was on the Ku Klux Klan’s “Most Wanted” list, with many brushes with death. A Civil Rights hero, she fought for the rights of others. [picture book, ages 6 and up]

She Stood for Freedom: The Untold Story of a Civil Rights Hero, Joan Tumpauer Mulholland by Loki Mulholland and Angela Fairwell, illustrated by Charlotta Janssen

This is an expanded version of the picture book with more details including photos and documents from her life. Particularly moving are her accounts and artifacts from her time spent in jail as a Freedom Fighter. Sidebars and photos on every page spread make this early chapter book easy to read. This is a nice addition for a Civil Rights Movement unit for 3rd, 4th or 5th grade. [early chapter book, ages 8 and up]

Please fill out the Rafflecopter below to win. I can only ship to U.S. only due to the high cost of mailing.