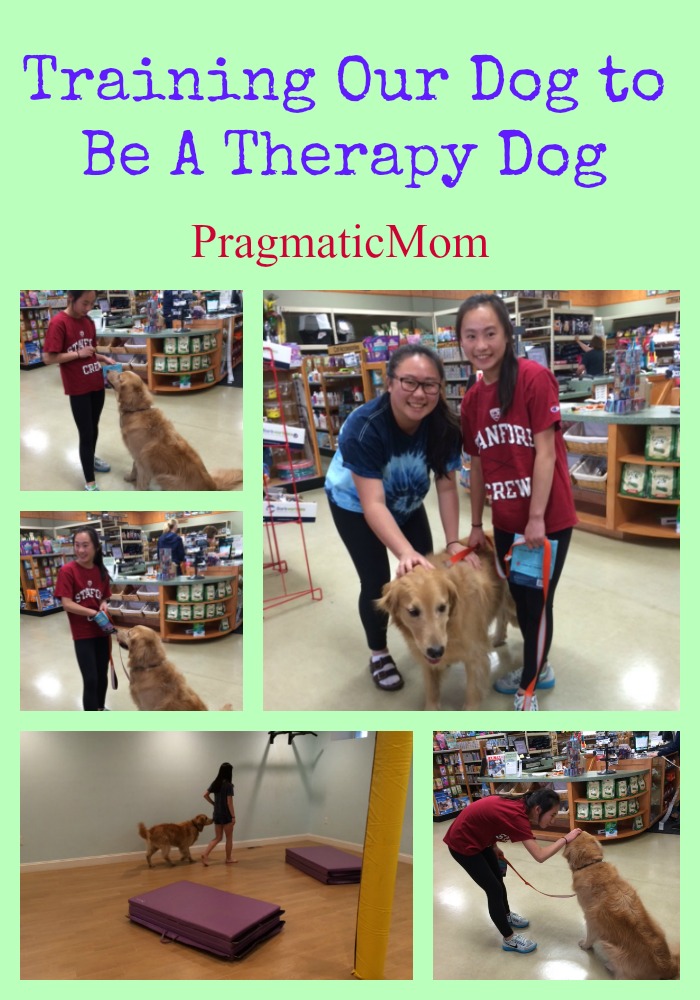 PickyKidPix came up with the idea to turn our Golden Retriever into a therapy dog. Her initial reason was sneaky. She wanted to bring him into grocery stores and on airplanes. A therapy dog certification is not enough for this, so she decided that this would be one way that she would do service work. I thought it was a great idea. I told her that I would drive her, but she would have to figure it all out herself. She researched and found a place in the Berkshires, two and a half hours from us where we could bring him to be certified. I thought that they would just check to make sure he was a friendly dog but, boy, was I wrong. More digging on my daughter’s part unearthed the organization, Pets and People, with a closer location for the certification test. But, after reading the requirements, she despaired about getting our dog to pass. It’s a really hard test for our food driven dog. He has to walk by food and water placed on the ground and not touch it. Even a lick is an INSTANT FAIL. Elements of the therapy dog test:

She decided that the only way our dog would pass was to sign him up for a Therapy Dog Training Class. I agreed. More internet research resulted in a class forty-five minutes away. Since our dog had not taken the prerequisites for this class, it took some finagling on my part to get him in. Here we are at our first dog Therapy Dog Training class. We’re not sure if our dog will flunk out on the first day, so a little pep talk was in order:

Our trainer, Marita Everhart, is wonderful. After the first lesson, our dog could actually leave treats untouched, heel, and close walk. But would this stick? My daughter tried again on day two at home:

It’s amazing to me how fast my dog is learning. It’s as if he really does want to become a therapy dog. I think he’s in it for the treats, but he does truly like interacting with people. My daughter, who is also a coxswain, has natural ability as a dog handler. It’s nice to see my daughter in her element. The other service work she plans to do is volunteering as coxswain at her club; her donation helps raise money to for a program that teaches inner city kids how to row.

After one lesson, my daughter’s goal is to get our dog to pass within a month. The dog trainer thinks it will take us four months, but my daughter is really determined and has been training our dog daily.

There’s also a big charity event in early December, Christmas in the City, which provides holiday magic and memories to Boston-area families living in homeless shelters. People and Pets bring a lot of therapy dogs and their handlers to this event and my daughter would really like to participate. I’ll keep you posted on our progress!

How about you? Have you ever thought of training your dog as a therapy dog? 40 thoughts on “Training Our Dog to Be a Therapy Dog”