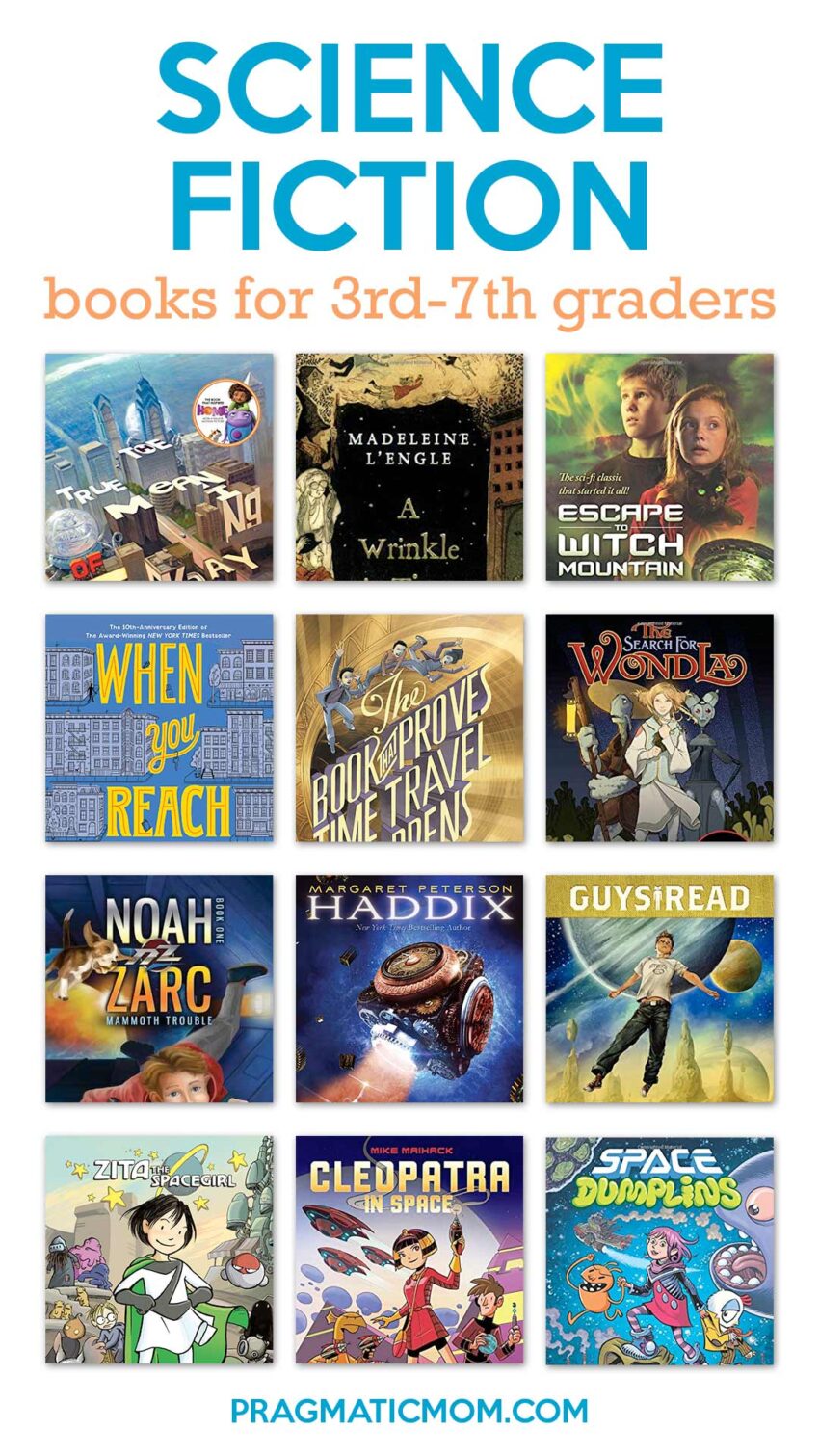 Science fiction: fiction based on imagined future scientific or technological advances and major social or environmental changes, frequently portraying space or time travel and life on other planets.

A reader asked me for Science Fiction books for 5th grade. I have a 5th grade son which gives me pause to give him Science Fiction that is too scary or too high for him. But there is also some confusion as to what is included in Science Fiction in my head. How does Dystopian fit in? Is it a sub-genre of Science Fiction or a different genre? Is there overlap?

The best answer I found says:

Dystopian novels are those set in a world that’s basically the opposite of a utopia. A world that’s bad, often with a tyrannical or otherwise oppressive government.

Works of science fiction involve scientific technology that’s most often invented for the work or imagined to have evolved from existing stuff, but based on real principles. They’re usually futuristic and often involve space – travel, other planets, etc.

What about time travel? Is time travel science fiction? What if it’s set in our current world?

Simply, Time Travel Science Fiction are stories in which traveling to the past or future is possible. Time travel is a natural complement to space travel and so it is a frequent occurrence in Sci Fi stories. from Best Science Fiction Books

In sorting out lists that I researched, I tried to focus on books that I would hand my 5th grader that falls firmly in Science Fiction territory. The book most likely to win him over to Sci Fi?

This is a hilarious and wildly creative take on alien abduction and invasion as told by our heroine, 11-year-old Tip.

What other great Sci Fi books for kids am I missing? Thanks for your suggestions!

A Wrinkle in Time series by Madeleine L’Engle

I remember not being able to put this book down when I read it as a child. Twins with paranormal gifts are on the run from evil forces. As their suppressed memories return, they realize that they were bought to earth because their own planet was dying. Now, armed with a coded map, they are in a race to find their own people. [science fiction chapter book with alien twist, ages 9 and up]

There are a lot of time travel books for 5th grade. For a complete list, check out Charlotte’s Library blog.

When You Reach Me by Rebecca Stead

The Book That Proves Time Travel Happens by Henry Clark

My son wholeheartedly enjoyed this time travel adventure. It has everything we like: humor, a diverse cast of characters, nail-biting adventure, and a plot with plenty of twists and turns. It’s not exactly Sci Fi in the sense that the book is set in current times and then time travels backward. The instrument for time travel is not exactly high-tech either. Still, this is a really fun and engaging read that hits the mark perfectly for 5th graders, both boys and girls. [realistic fiction chapter book with a time travel twist, ages 8 and up]

Lost in Cyberspace by Richard Peck

I’m a huge fan of Richard Peck so I was delighted to discover his Sci Fi chapter book. Josh Lewis goes to Huckley School for Boys, a posh NYC private school. His best friend, Aaron, figures out how to time travel using the computer and somehow mixes up Huxley’s past with the present. It turns out that the building that their school resides in has unfinished drama that will solve Josh’s mom’s Au Pair problem, at least temporarily [realistic fiction chapter book with a time travel twist, ages 9 and up]

Earth is no longer inhabitable but Noah’s family is part of a plan to repopulate post-apocalyptic Earth. Their space ship is a modern ark, meant to house the animals that they capture by going back in time. Not everyone agrees with this plan.  Noah’s dad gets trapped in the Ice Age and his mom is kidnapped and taken to thirty-first century Mars. It’s up to Noah to stop the person behind this and rescue his parents. [chapter book, ages 8 and up]

Jonah and his friend Chip seem like ordinary kids but when mysterious notes arrive, they find that they, along with others, are part of a conspiracy that stretches back in time. I don’t want spoilers so suffice it say that there is time travel backwards and forwards and ensuing paradoxes issues occur because of it. Something must be done but the solution is more complicated and dangerous that Jonah and his friends realize. This is a fast paced, engrossing book that makes you want to line up all the books before you begin so you can race through the entire series in one big binge read marathon session. [realistic fiction chapter book with a time travel twist, ages 9 and up]

For a sampling of Sci Fi, my son and his book club loved this short story compilation edited by Jon Scieszka. He created this series, Guys Read, in order to get boys reading, and it really does work. Meet new authors who might not usually write science fiction through these stories and enjoy a range of stories that span the range of funny, unexpected, clever, and downright scary! [science fiction short stories by wonderful children’s book authors, ages 8 and up]

With a giant mouse for a friend (and transport) and traveling in new worlds that are not too scary against foes that have a cuteness to their destructive powers, her adventures are perfect for young girls’ bedtime reading. [graphic novel, ages 7 and up]

Cleopatra in Space by Mike Maihack

For fans of Zita the Space Girl, young Cleo (Cleopatra of Ancient Egypt) could be Zita’s literary sister. Both are stranded through time travel into the future where the fate of the world rests in their hands. Cleo finds school boring both in Ancient Egypt and in the future, but her weapons get a serious upgrade from slingshot to laser gun! References to Ancient Egypt are abundant in Cleo’s time travel future, with talking cats giving the orders. The future has been expecting Cleo as an ancient oracle has predicted her arrival as their hero that can turn darkness into light. Perfectly paced action will interest boys, and girls will appreciate Cleo’s fighting skills combined with her social conundrums. [graphic novel, ages 8 and up]

Violet Marlocke lives on the wrong side of the asteroid belt. Because of the galaxy-wide energy crisis, her father has taken a dangerous mission and he’s now missing. Violet and her misfit friends are off to rescue him in an adventure that includes baby space whales, top secret energy research, and a garbage filled galaxy.  [graphic novel, ages 8 and up]

Wrinkle in Time: The Graphic Novel by Madeleine L’Engle, illustrated by Hope Larson

Now, Wrinkle in Time comes to life as a graphic novel. Perfect for delighting old fans and winning over new ones, try this graphic novel for reluctant readers. [graphic novel, ages 9 and up]

These books get recommended over and over again.

The Search for Wondla trilogy by Tony DiTerlizzi

Tony DiTerlizzi is famous for his Spiderwick Chronicles books. This is his foray into Science Fiction but it feels more like Fantasy to me though there are the requisite elements: space-age adventure, robots, and exploration of an alien planet.

There’s a unique element to this book. DiTerlizzi has placed 3D interactive illustrations throughout the book. It’s a map that lets you follow the sights and sounds of Eva Nine’s journey. You’ll need a webcam and Internet access but you can also experience noninteractive maps and a video at WondLa.com. Pretty cool stuff!

12-year-old Eva Nine is raised by a robot living underground, but when her home is destroyed, she must flee and seeks to find others like her. It is possible that she’s the only human on planet Orbona? [middle grade, ages 10 and up]

If you take The Jetsons TV show with their robotic domestic help but add in a mildly dystopian world where scientists and technocrats reign supreme, you’ll get Eager. The future still has socio-economic divides but the poor who reside in the City Center are unemployed due to robots but do not go without food or entertainment.

There is a robot hierarchy with the newest and most advanced tech out of reach for most of the population. The Bell family has an old-fashioned housekeeper, Grumps, who’s starting to fail. Rather than remove his battery, they decide to get a new robot to help him, Eager. Unlike Grumps who is programmed to obey, Eager’s technology allows him to exercise free will. Can free will and technology co-exist or is this a recipe for a robot rebellion? [chapter book, ages 8 and up]

This is a classic science fiction chapter book that has stood the test of time. Written in 1967, it still captives readers with heart thumping action in an imagined word where machines — three-legged Tripods — control humans by surgically attaching a “cap” control panel in their skulls when they became an adult. [dystopian science fiction chapter book, ages 9 and up]