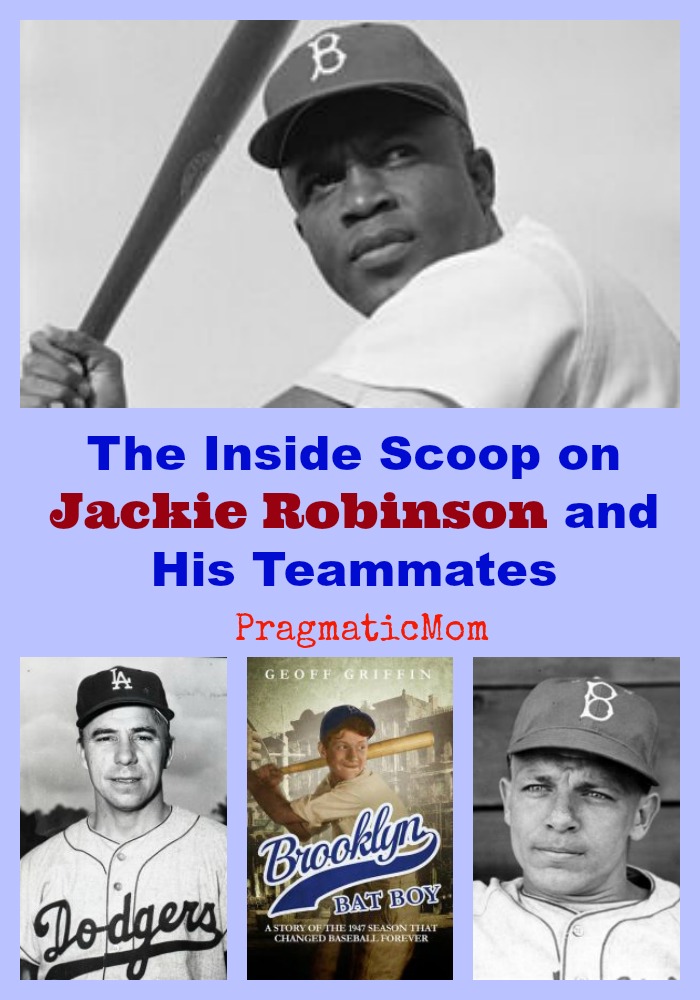 Please welcome my guest author today, Geoff Griffin, who wrote a Jackie Robinson story that my son and I really connected to, Brooklyn Bat Boy. Told from the point of view of a fictional bat boy, it’s the story of Jackie Robinson’s first season with the Brooklyn Dodgers. What struck me was the reaction of his teammates reflected the world around him during this time of segregation and Jim Crow laws. Eddie Stansky did not being on an integrated team, but when a rival team harassed Jackie, he was the first to stick up for him. Pee Wee Reese, on the other hand, harbored no such racism. His support may have been the difference between success and failure of this social experiment? Who knows?  Please read on for Geoff’s post … The Inside Scoop on Jackie Robinson and His Teammates

While doing research for my book Brooklyn Bat Boy, the fictional story of the bat boy for the Dodgers during Jackie Robinson’s 1947 rookie season, one thing that struck me was how much the attitudes of Robinson’s teammates changed as spring turned to fall that season.

In reading books such as Jonathan Eig’s Opening Day: The Story of Jackie Robinson’s First Season, I was able to see how the views of other Dodgers evolved as they got to know their new teammate. Their experience reflects how many Americans reacted to the completely new scenario of Brooklyn having an African-American first baseman in 1947.

I tried to illustrate this gradual and sometimes halting process through the main character of Brooklyn Bat Boy, 12-year-old Bobby Kelly. When he learns about Robinson being on the Dodgers, he immediately asks how such a thing could be possible if it has never happened before.

One of the things that is interesting about the way children often react to new ideas is that they don’t automatically think something is good or bad, they just aren’t sure how to process it. Bobby, like many other people, isn’t necessarily against Robinson, he’s just not sure how this whole new way of looking at things is going to work.

In 1947, there were people who supported having an African-American playing for the Dodgers and there were others, including some of Robinson’s teammates, who didn’t want to see the American pastime become integrated. There was also a significant third group of people who really weren’t sure what to think. It wasn’t that they were necessarily against Robinson, it was just that an African-American playing Major League Baseball was something that hadn’t been done before or was something that had never really given much thought to.

Edward Raymond Stanky (September 3, 1915 – June 6, 1999), nicknamed “The Brat”, was an American professional baseball player and manager. Leo Durocher, who managed him with the Dodgers and Giants, once summed up Stanky’s talents: “He can’t hit, can’t run, can’t field. He’s no nice guy … all the little SOB can do is win.” From Wikipedia Eddie stared at Robinson, but he stared right back. Finally Eddie said, “Before I play with you, I want you to know how I feel about it. I don’t like it and I don’t like you, but we’ll play together and get along because you’re my teammate.” (page 54)

Bobby hustled back to the dugout. Just as he got there, Eddie came up to the top step of the dugout. He looked over at the Phillies and yelled, “Hey you yellow bellied cowards! Why don’t you pick on someone who can fight back!”

Fortunately, for baseball and America, Dodgers president Branch Rickey had already thought through some of these questions and Robinson had the unshakable courage to get through things as the answers to the other questions were being revealed.

Did everything go smoothly in that 1947 season? Not at all. One of the striking things about those critical few months from April through October is how many times things could have gone horribly off the rails. As we look back from 2016, it seems obvious that Robinson would succeed and America would make the right choice on the issue of baseball integration, but in 1947, it probably didn’t seem anywhere close to clear-cut for anybody around the Dodgers.

Harold Peter Henry “Pee Wee” Reese (July 23, 1918 – August 14, 1999) was an American professional baseball player. He played in Major League Baseball as a shortstop for the Brooklyn and Los Angeles Dodgers from 1940 to 1958. A ten-time All Star, Reese contributed to seven National League championships for the Dodgers and was inducted into the Baseball Hall of Fame in 1984. Reese is also famous for his support of his teammate Jackie Robinson, the first modern African American player in the major leagues, especially in Robinson’s difficult first years. from Wikipedia Pee Wee laughed and said, “Get away from me you human target. Some crazy will take a shot at your and miss and hit me. I don’t look good with holes in me.”

For the first time all season, Bobby saw, not only was Robinson laughing, he was laughing with a teammate. (page 87)

Robinson was standing there, and the yelling started up again. Bobby looked up and down the bench to see if anybody was going to do anything, but nobody was moving.

He looked up and saw Robinson standing there with his usual stare, but then he saw somebody moving. Pee Wee Reese was walking over to where Robinson was. He put his arm around Robinson and started talking to him.

The reason I felt it was so important to tell the Jackie Robinson story to children is because it illustrates how getting outside of our comfort zone a little bit and being open to new ways of looking at things can lead to new experiences we wouldn’t otherwise have. At the beginning of the season, Bobby feels bothered by having to deal with the newest Dodger, but gradually learns Robinson is someone he can both respect and learn from.

From 1947 through 2016, the Jackie Robinson story continues to provide valuable lessons. Geoff Griffin has worked as a lawyer, special education teacher, journalist and editor. He has over 20 years of experience writing for a variety of newspapers and magazines. He has had a number of essays published in anthologies and is co-host of the award-winning Travel Brigade Radio Show and Podcast. Brooklyn Bat Boy is Griffin’s first work of fiction. Follow @BrooklynBatBoy on Twitter to learn more. For more great historical fiction books for kids, please check out my Pinterest board: