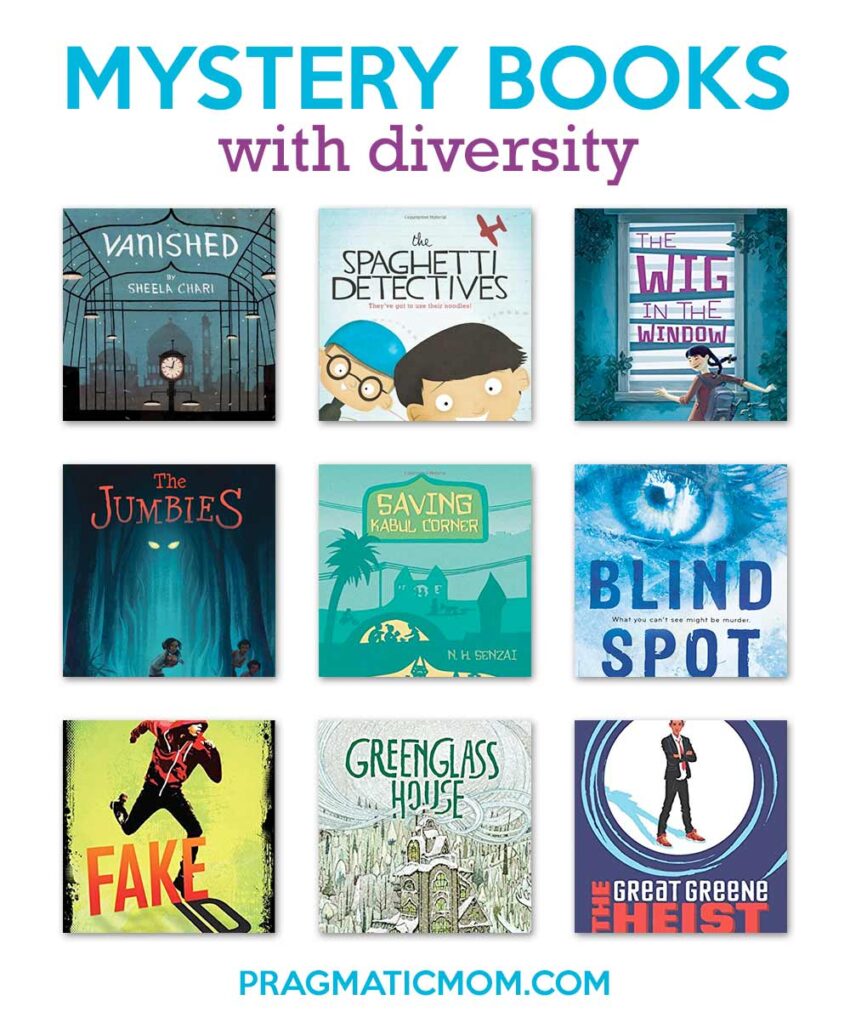 Please welcome my guest blogger today, author Kristen Kittcher! We both came up with our favorite diversity mysteries for kids and I’m surprised how there is very little overlap!

There’s little I love more than reading books about smart, curious, and creative kids—especially if those adventures involve solving high-stakes mysteries that elude adults. So, it’s no surprise that I also love writing about them. My seventh grade best friends and wannabe super-sleuths Sophie Young & Grace Yang certainly go on some wild adventures in my own mysteries for young readers, The Wig in the Window and The Tiara on the Terrace.

But what’s even more wonderful than following the adventures of clever sleuths? When those novels’ heroes truly reflect the diverse spectrum of backgrounds and experiences of the real world!

Here are some of my recommendations to help stock your bookshelves with diverse mysteries for the mystery-loving teens and kids in your life:

The Spaghetti Detectives by Andreas Steinhöfel

This book, which won the German equivalent of the Newbery in 2009, follows the adventures of Rico, who struggles with learning differences, and Oscar, his genius best friend, who together blend their unique views of the world to apprehend a kidnapper. It’s a quirky book—made quirkier by the English translation, perhaps—but it’s a fun mystery that reveals the potential power of differences. [middle grade, ages 8 and up]

This exciting tale of mystery, magic, and music follows the adventures of eleven-year-old Neela, who lives in Boston and dreams of being a musician. However, when her veena (a traditional Indian instrument) is stolen, she discovers it has a secret history her family has kept hidden from her. This is a beautifully written, rich, adventurous story that also explores shifting family relationships and friendships – all in a well-paced package that will delight kids. [middle grade, ages 8 and up]

The Jumbies by Tracy Baptiste

I had to include this wonderfully spooky tale based on the Haitian folktale that will have you on the edge of your seat! Skeptical young Corinne LaMer doesn’t put much stock in the island lore about the monsters (Jumbies) who are said to live in the forest – that is, until one comes to her house…. Remarkably, this book manages to subtly examine themes of colonization and rebellion while remaining accessible to very young readers. Though not a traditional mystery, this adventure is plenty mysterious and thrilling. [middle grade, ages 8 and up]

Great Greene Heist and To Catch a Cheat by Varian Johnson

Leave it to funny, talented Varian Johnson to manage to set a political thriller around a middle school election with his fantastic heist book featuring clever hero Jackson Greene – not to mention its twisty, exciting sequel in which the wonderfully diverse “Gang Greene” must foil blackmailers. These are fun, fast-paced, clever books that also seamlessly weave in issues of politics and race. [middle grade, ages 8 and up]

When suspicious visitors begin showing up at the inn Milo’s parents run and a spate of thefts follows, he and his best friend Meddy try to get to the bottom of the strange mysteries of Greenglass House in this original, beautifully written, and hugely entertaining mystery from Kate Milford that’s also been optioned for film. An adopted orphan of Chinese descent, Milo’s heritage is integral to his identity and journey, as well. [middle grade, ages 8 and up]

A thrilling YA murder mystery with substance about a black teen in the Witness Protection program whose friend was murdered just before uncovering a major conspiracy. Not only did the protagonist win me over with his smarts, skepticism, and humor, but the family drama at its center added an extra layer of depth in this page-turner. [young adult, ages 14 and up]

Legally blind herself, Laura Ellen wove her own experience into this gripping YA thriller about a teen with macular degeneration investigating the murder of a classmate. Not surprisingly, the hero’s experience rings very true and offers an unflinching emotional journey that readers won’t forget. [young adult, ages 14 and up]

Of course, any list is always just a beginning. I could keep going: there’s Siobhan Dowd’s wonderful The London Eye Mystery, featuring an autistic character who solves the mystery of his cousin’s disappearance; Y. S. Lee’s thrilling Agency series, set in Victorian London and centered around a whipsmart half-Chinese protagonist; N.H. Senzai’s Saving Kabul Corner which offers one of the few mysteries I’m aware of that centers around Middle Eastern characters; Kate Messner’s fun ensemble mystery Capture the Flag; Marcia Wells’ art-based mystery Eddie Red Undercover. Given the systemic historic barriers to publishing for writers of color, I recommend you look out for great indie-published mysteries, too: the first book in Brigette Alexander’s art-themed YA Celine Caldwell mystery series that just launched is well worth checking out!

There are more wonderful mysteries from authors of color or featuring protagonists of color that I’m missing – but hopefully, you’ll add your favorites in the comments. I firmly believe that the greater the range of books and experiences on kids’ shelves, the better! KRISTEN KITTSCHER is the author of bestselling tween mysteries The Tiara on the Terrace and The Wig in the Window (Harper Children’s, 2013) which garnered a starred review from School Library Journal and was on ten Best of the Year lists. A graduate of Brown University and a former middle school English teacher, Kristen was named the James Thurber House Children’s Writer-in-Residence in 2014. She presents frequently at schools, libraries, and festivals and is active in promoting community literacy initiatives in Southern California, where she lives with her husband, Kai. When Kristen is not reading, writing, or teaching, you’ll find her spending time with friends or hiking in the foothills near Pasadena with her dog, Mabel. Visit kristenkittscher.com to investigate more about her or follow her on Facebook and Twitter (@kkittscher).

The Tiara on the Terrace:Inspired by the Tournament of Roses, get ready for parades, pageantry, suspense, and a hefty dose of hilarity as 7th grade spies Sophie Young and Grace Yang trade their high tops for high heels to investigate a deadly crime in this clever Miss Congenialityset in middle school! When the director of the Winter Sun Festival meets an untimely end, it’s up to our favorite savvy, wise-cracking sleuths to solve the case–before they become its next victims.

The Case of the Burgled Bundle: A Mighty Muskrats Mystery by Michael Hutchinson

“Here’s my first reason of four to highly recommend this book: Authenticity. The author is Cree, and the setting is a fictional Cree community in what is currently known as Canada, with Cree characters who are believable, likable, and never stereotypical. The mystery confronting the young sleuths is plausible and meaningful in their community (though it can certainly resonate with non-Native readers). The resolution is surprising (to me, at least) but logical and satisfying in that context.” [middle grade, ages 8 and up]