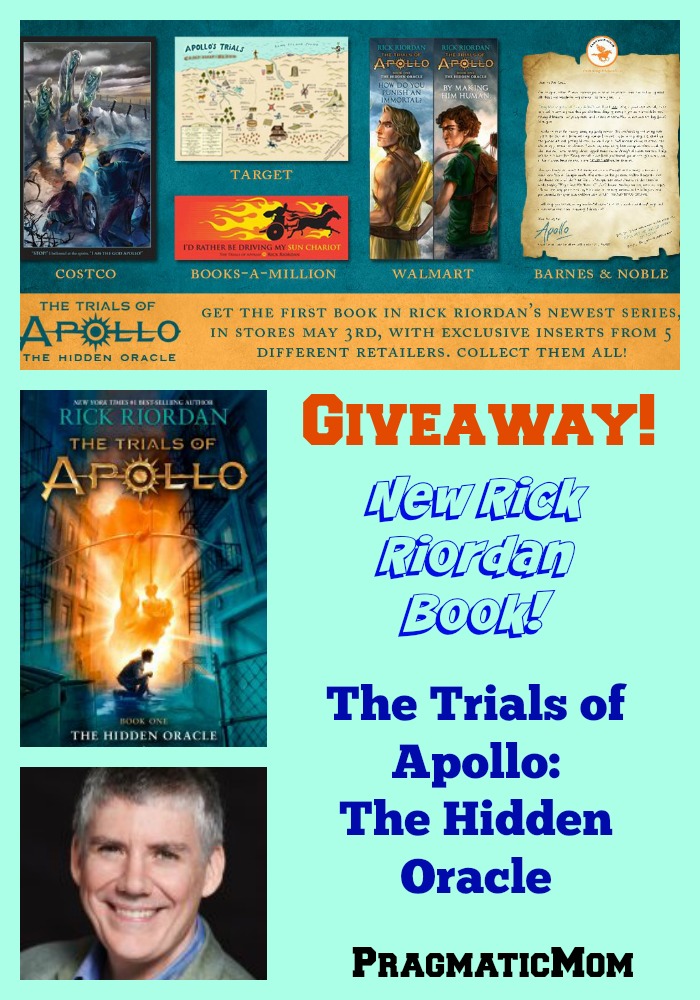 This post is brought to you in partnership with Disney-Hyperion. Disney-Hyperion sent me this title, and is also providing a prize pack for one winner from my site. The Trials of Apollo: The Hidden Oracle by Rick Riordan

After angering his father Zeus, the god Apollo is cast down from Olympus. Weak and disoriented, he lands in New York City as a regular teenage boy. Now, without his godly powers, the four-thousand-year-old deity must learn to survive in the modern world until he can somehow find a way to regain Zeus’s favor.

But Apollo has many enemies—gods, monsters, and mortals who would love to see the former Olympian permanently destroyed. Apollo needs help, and he can think of only one place to go . . . an enclave of modern demigods known as Camp Half-Blood. [chapter book, ages 8 and up] FREE Stuff for The Trials of Apollo: The Hidden Oracle

Ready more more? Here’s what I have for you:

READ: an excerpt of The Trials of Apollo

Where to Buy The Trials of Apollo: The Hidden Oracle

The Hidden Oracle is being released with five retail-specific editions that all hit shelves on May 3rd. Each edition includes a unique insert that you can get exclusively from that retailer. Collect them all!

The Trials of Apollo: The Hidden Oracle GIVEAWAY

One (1) winner from your site will receive one of the exclusive editions of The Hidden Oracle with a surprise insert, plus a $25 Visa gift card. Please fill out the Rafflecopter below to win.

Giveaway open to US addresses only. Prizing and samples provided by Disney-Hyperion. Rick Riordan, dubbed “Storyteller of the Gods” by Publishers Weekly, is the author of three #1 New York Times best-selling middle grade series with millions of copies sold throughout the world: Percy Jackson and the Olympians, based on Greek mythology; the Kane Chronicles, based on Ancient Egyptian mythology; and the Heroes of Olympus, based on Greek and Roman mythology.

Rick collaborated with illustrator John Rocco on two best-selling collections of Greek myths for the whole family: Percy Jackson’s Greek Gods and Percy Jackson’s Greek Heroes. The first book in hisMagnus Chase and the Gods of Asgard trilogy based on Norse mythology, The Sword of Summer, also debuted at #1 on the New York Times list.

Rick lives in Boston, Massachusetts with his wife and two sons. Follow him on Twitter at @camphalfblood. Need more ideas to keep your kids reading? There are great book lists and reviews here on my collaborative Pinterest Board: Best Books for Kids.