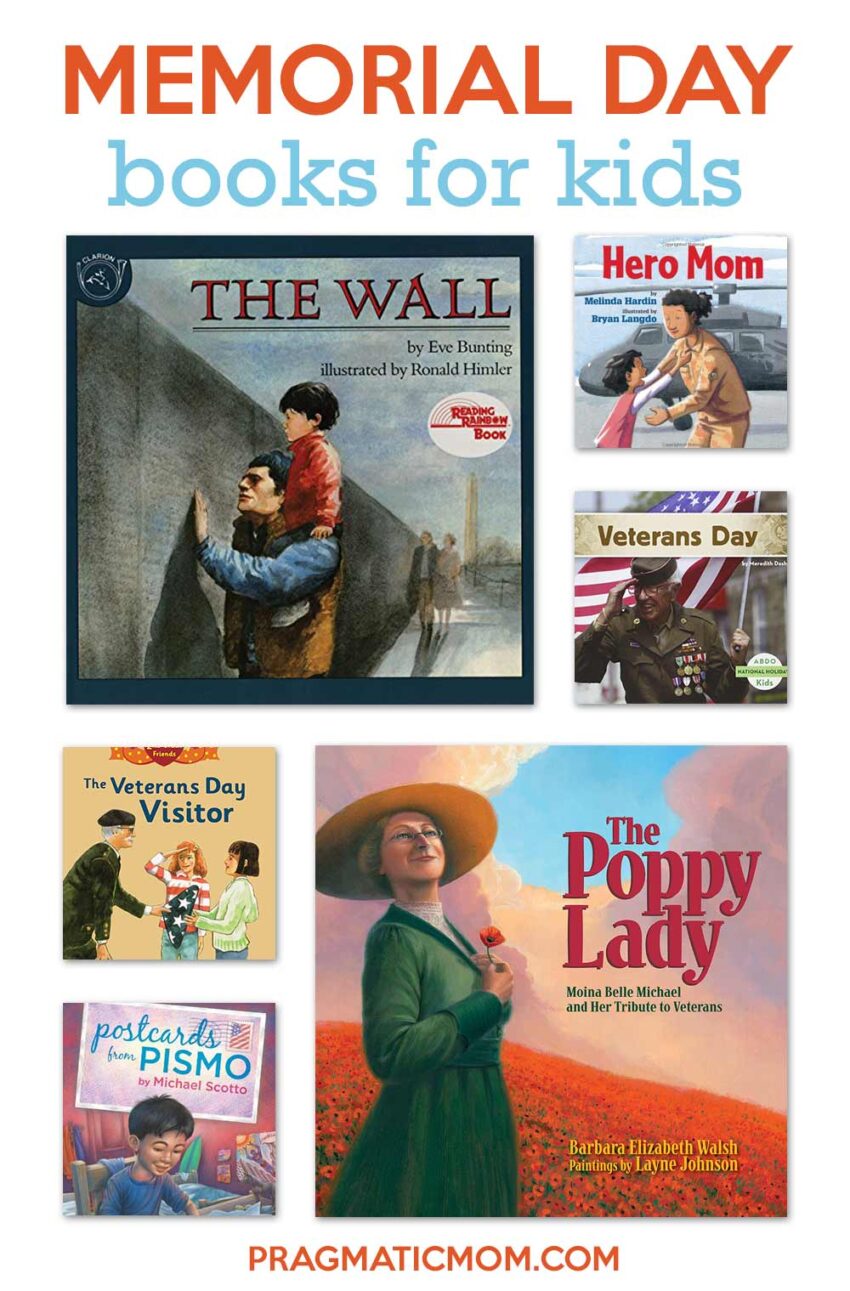 It wasn’t easy to find books in my library for Memorial Day. While there are a few picture books, none were on the shelves. Rather than give you a list of hard-to-find books, I’ve narrowed the list to just three and have added activities that I rounded up from Pinterest.

First, here’s some background on Memorial and Veterans Day:

Veterans Day is sometimes marked by a minute of silence at 11 am on November 11 to mark the end of WWI, then called Armistice Day. In 1954, Armistice Day became Veteran’s Day and is a day to honor all U.S. Veterans. It is now celebrated on the second Monday of November.

How are you celebrating Memorial Day this year?

WWII Books for Kids and My Mother’s Story

The Wall by Eve Bunting, illustrated by Ronald Himler

A boy and his father visit Maya Lin’s Vietnam Veterans Memorial in Washington D.C. in search of
the boy’s grandfather’s name. It’s a somber moment for everyone standing in front of the memorial: the vet in the wheelchair, an older couple, and the boy and his father. The grandfather died at the time when the boy’s father was the same age as his son. They located the name and do a tracing. The boy has another idea of how to pay tribute to his grandfather using his school photograph.

This picture book does a beautiful job honoring those that died fighting for their country. The endnote says that there are 58,000 names on the wall, with other names constantly added as the remains of those “missing in action” are found. [picture book, ages 6 and up]

Author Barbara Elizabeth Walsh has a personal story about Moina, the Poppy Lady. In her attic, there is a box with a poppy pinned to a handwritten postcard. It was sent to her mother, then the fiancée of her father, by Moira. He was one of many, many soldiers that she lent a kind ear to. Can the kindness and caring of one person ripple through the world from one century into the next? The story of Moina Belle Michael, not a household name by any means, proves that it can! [advanced picture book, ages 6 and up]

A Day for Rememberin’: The First Memorial Day by Leah Henderson, illustrated by Floyd Cooper

“[told] by Eli, the ten-year-old son of formerly enslaved parents, as the narrator. It’s 1865 and the Civil has ended with the Confederate surrender. And for nine days, Eli has wondered where his Papa goes to so early every day. Eli imagines him doing all kinds of things, but he isn’t allowed to follow Papa because he is going to school, and as his mother reminds him, “…you have the hard earned right to learn…Masters locked away learning ’cause knowledge is its own freedom.”

Finally, though, on day ten, Papa wakes Eli up early and they join a procession of other formerly enslaved men and boys and head to the Charleston, South Carolina racetrack, once used for the entertainment white plantation owners. During the Civil War, the racetrack had become a prison where Confederates put captured Union soldiers, who were starved and treated so badly that even the enslaved women would try to sneak the men whatever morsels they could spare.
Eli discovers that the men have been working to create a cemetery for the 257 dead Union soldiers who had been held in the racetrack. And it’s here that Eli has a paintbrush put in his hands to help whitewash a fence with the other children.

While this may be a work of historical fiction, the cemetery, called the Martyrs of the Race Track that was created in Charleston, South Carolina by formerly enslaved men, women, and children is considered by some scholars to be the first observance of Decoration Day, later renamed Memorial Day.” [picture book, ages 6 and up]

Celebrate moms who double as superheroes, serving in the military! They build buildings, fly helicopters, find missing people and dangerous objects, fix military vehicles from tanks to airplanes, heal the wounded, and lead battalions. [picture book, ages 4 and up]

These dads jump out of airplanes, use night vision, drive tanks, wear camouflage, carry weapons, and have a platoon. They are like superheroes; they are American soldiers! [picture book, ages 4 and up]

Twenty-One Steps: Guarding the Tomb of the Unknown Soldier by Jeff Gottesfeld, illustrated by Matt Tavares

Many were families whose sons died nameless and faceless. As they knelt, prayed, and anointed my flag with tears, I felt their stories. The stories of a Boston kid who swung for the fences, a Texas boy who broke horses, a Choctaw Nation farmhand, a Nevada miner.

This is a loving tribute to the Tomb Guards who protect the Tomb of the Unknown Soldier at Arlington National Cemetary. They are a special military unit that has guarded the Tomb of the Unknown Soldier since July 2, 1937. It is the highest honor to serve in this position. They remind us to honor those who have made the ultimate sacrifice for our country. [picture book, ages 7 and up]

Did you know that there was controversy over which day Veterans Day should be celebrated? The fascinating history of Veterans Day is explained in this picture book for very young readers. [picture book, ages 4 and up]

Emily’s grandfather is shocked that she’s in 2nd grade but doesn’t know about Veterans Day. She thinks it’s to celebrate animal doctors! He decides to visit her class to make a presentation. Her grandfather is a veteran so he has great stories to tell, but he also has narcolepsy so he falls asleep unexpectedly. Emily’s worried he will fall asleep in class! [early chapter book, ages 6 through 9]

10-year-old Felix Maldonado has a school project to write a letter to a soldier fighting in Afghanistan. To his surprise, his soldier, Marcus,  writes him back and soon Felix begins to rely on him for life advice, especially after he gets bullied and his older brother enlists in the military. Told entirely in letters, emails, and postcards from Felix to Marcus, Postcards from Pismo is a coming-of-age story that tackles what it means to be brave, both at home, in school facing bullies, and on a battlefield. [chapter book, ages 8 and up]

“This is a well-balanced look at both life in the military and life in a besieged country, and the fact that it is written by authors who have those backgrounds and who met in Afghanistan is wonderful. There are so many good details about everyday life and pivotal events that would not be as clearly evocative without that personal experience. I especially liked Joe’s surprise that the fighting wouldn’t be like a WWII movie and that he would be engaged in peacekeeping and reconstruction. The shout-out to Ernie Pyle was one that I appreciated and might encourage readers to look up to this journalist. In the same way, Baheer’s disenchantment with education under the cruel teachers of the Taliban, and his growing desire to learn when exposed to information on his own was heartwarming and teaches  an important lesson: educated people are a threat to totalitarian regimes.” [young adult, ages 12 and up]

My son made this poppy at school using construction paper, a brad, and a pipe cleaner.

Step 2: Cut a circle out of black construction paper.

Step 3: Cut slits in the black circle towards the center but not all the way to the center.

Step 4: Line up the petals and the black circle. Insert the brad to connect them.

Step 5: Attach a green pipe cleaner in the back for the stem. My oldest daughter, Grasshopper and Sensei, painted both these poppy paintings inspired by Emil Nolde. For this art project, my daughter used watered down acrylic paint but water color will work just as well.

Step 1: Wet the watercolor paper so that it’s moist but not dripping.

Step 2: Load your paintbrush up with paint and carefully drop it in, letting it bleed into a circle. Each circle will become a flower.

Step 3: Let the first round of paint dry about half way, and then drop in dark brown or black dots in the center.

Step 4: When the paper is completely dry, add in the stems. My daughter used acrylic paint on canvas board to make this painting. She painted a background of light peach and then dropped in circles of color to make the flowers. After it dried, she added in the black centers.

My Own Poppy Paintings

Here’s my own attempt at painting 15 minutes a day. I’m using an Emil Nolde photograph of poppies.

I love the poppies by Emil Nolde. Here’s a video of those plus my own attempt.

P is for Poppy from that artist woman. Homecoming:Veterans,Wives and Mothers from Messina Captor Films on Vimeo.