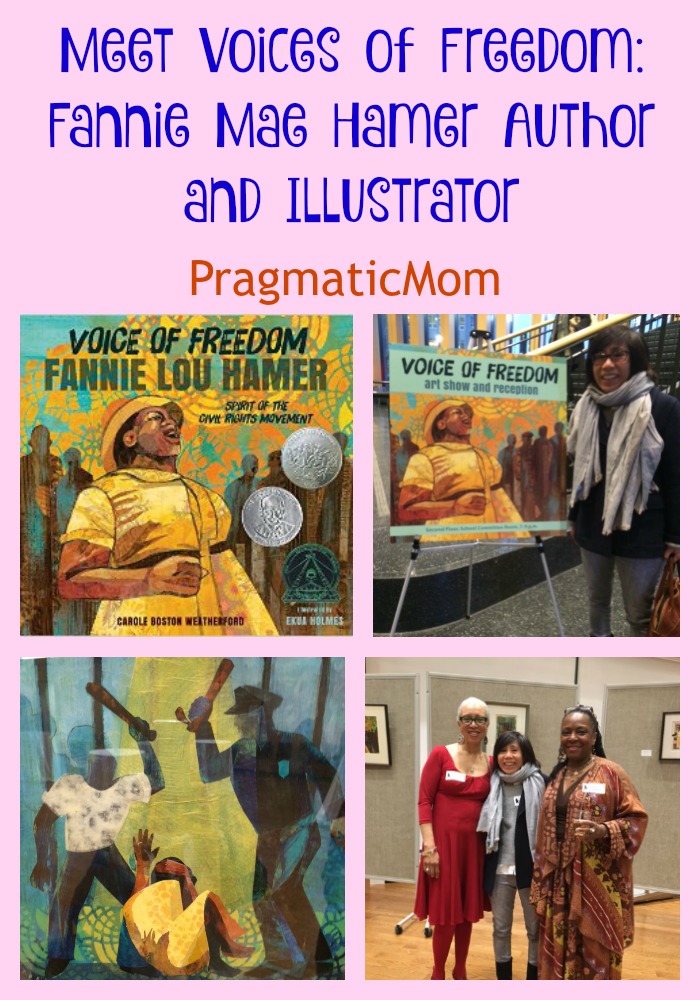 It was an honor and a thrill to meet author Carole Boston Weatherford and illustrator Ekua Holmes of Voices of Freedom: Fannie Lou Hamer: The Spirit of the Civil Rights Movement. Did you know that Voices of Freedom won: The book also won a silver medal at the Society of Illustrators Original Art Show, a Parent’s Choice Gold Medal, and the Flora Steiglitz Straus Award for nonfiction from Bank Street College of Education. Even more amazing is that this is Ekua Holmes first picture book as an illustrator!

The book event hosted by Candlewick Press was an art exhibit in Roxbury, outside of Boston. I brought Grasshopper and Sensei because I thought she’d enjoy the art. And she did! Even with a concussion!

Let’s meet Carole Boston Weatherford! She talks about her inspiration for this book …


Malcolm X once called me

the country’s number one freedom-fighting woman.

But nothing about my beginnings would make you think

anyone beyond these parts would ever hear my name.

It’s time that the world learned about Fannie Lou Hamer, a hero of the Civil Rights Movement alongside Martin Luther King, Jr., Malcolm X, and John Lewis. Working for voter registration in Mississippi, she lost her job and her home, but that didn’t stop her. She sang for freedom as an inspirational leader with the Student Nonviolent Coordinating Committee, and cried like she lost her own sons when three of the boys were murdered by the Ku Klux Klan.

Arrested on bogus charges, she was beaten by the police who also made the other prisoners beat her too. She suffered permanent kidney damage and walked with a limp from this but still she fought on. Voices of Freedom tells Fannie Lou Hamer’s story and achievements in glorious and vibrant mixed media collage illustrations. [advanced picture book, ages 9 and up]

In this next video, illustrator Ekua Holmes welcomes you to Roxbury, her hometown. It’s also where Malcolm X lived and the event was fittingly off Malcolm X Boulevard.

Finally, experience the art exhibit as we did. Hope you enjoy it too! This is the first time author Carole Boston Weatherford sees the original illustrations too! 8 thoughts on “Meeting Voices of Freedom: The Fannie Mae Hamer Author and Illustrator”