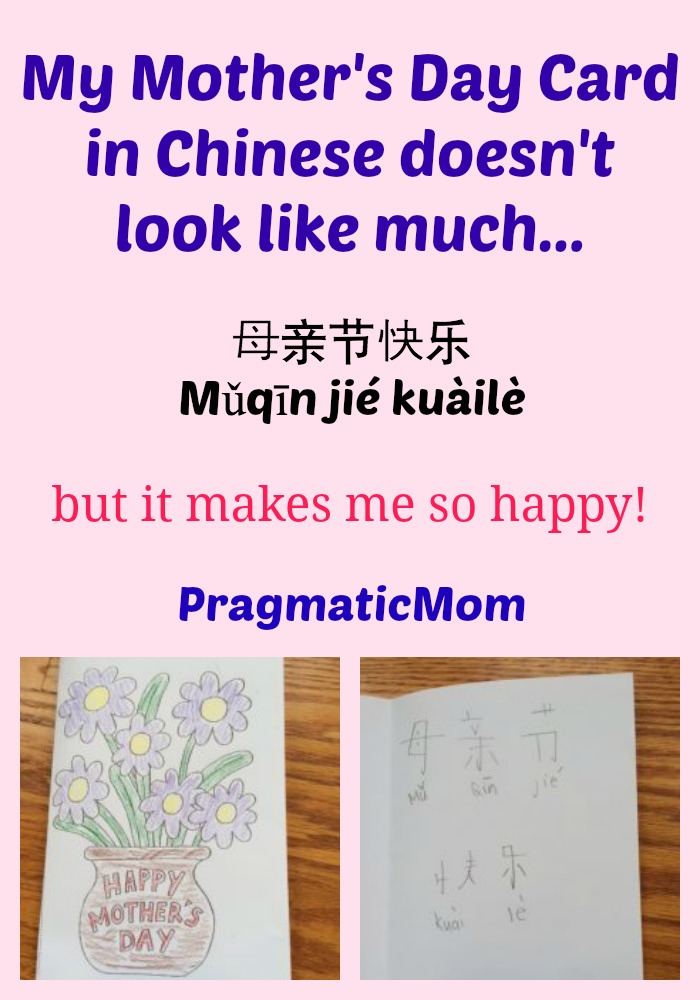 Grasshopper and Sensei started learning Chinese when she was in kindergarten. My neighbor tutored Chinese so it was easy to slip this in. I thought we were all set but then she moved away by the end of that school year. To continue their Mandarin, I put my girls into Chinese school for adopted Chinese babies. No one speaks Chinese at home. I was in Chinese school for one year when I was in elementary school and my siblings and I were the ONLY kids who spoke English at home. It was not a great experience.

After two years of this Chinese school, my girls wanted out. I hired another Chinese tutor who evaluated them to see what they knew. It turns out that my kids only knew how to count to 10 in Chinese. How could this be? I had sat through those Chinese classes while the teacher drilled flashcards covering the colors including silver and gold! They had been taking Chinese for more than three years! Deep breath. I took several. I focused on my mantra: It doesn’t matter how many words they remember. It’s more to get them speaking with a decent accent and getting them intuitively understanding how different languages construct sentences in very different ways.

My kids started getting busier. The year that all three of them played town soccer and club soccer was the year that we just could not fit in Chinese. I was too tired to figure out a slot, even if it was humanly possible. A year without Chinese passed. Then two. My son who had been learning Spanish since he was a baby could not even remember the color green in Spanish. In one ear and out the other was happening; they were forgetting more than then they were learning. Deep sigh. Feeling defeated, I just had let it go. Then, this past year, PickyKidPix announced that she would like to learn three languages. Out of my three kids, she has the least natural ability but she works the hardest. She had been taking Spanish and Latin in middle school and now she would like to add back Chinese at home. Could I hire the tutor back again? I was delighted to.

Grasshopper and Sensei had switched from Chinese to Spanish in high school and had no interest in learning more Mandarin. My son said he was going to take Spanish in middle school next year, not Chinese, so he didn’t want to take 15 minutes of the hour lesson. I forced him to anyway. It turns out that he remembers more Chinese words than just the color green. This week’s Chinese lesson included making these Mother’s Day cards. They don’t look like much, but they make me happy. All those years of trying to expose my kids to Chinese did count for something after all.

Happy Mother’s Day (and Aunt’s Day, Grandmother’s Day) to everyone out there! Hope you all have a wonderful day!

p.s. I really did try to expose my kids to Mandarin Chinese and Spanish at home. Here’s my evidence:

Introducing Foreign Languages to Your Kids

Kids Can Learn Spanish Through Songs

I have more posts and ideas on my two Pinterest boards: 6 thoughts on “My Mother’s Day Card in Chinese Makes Me So Happy!”