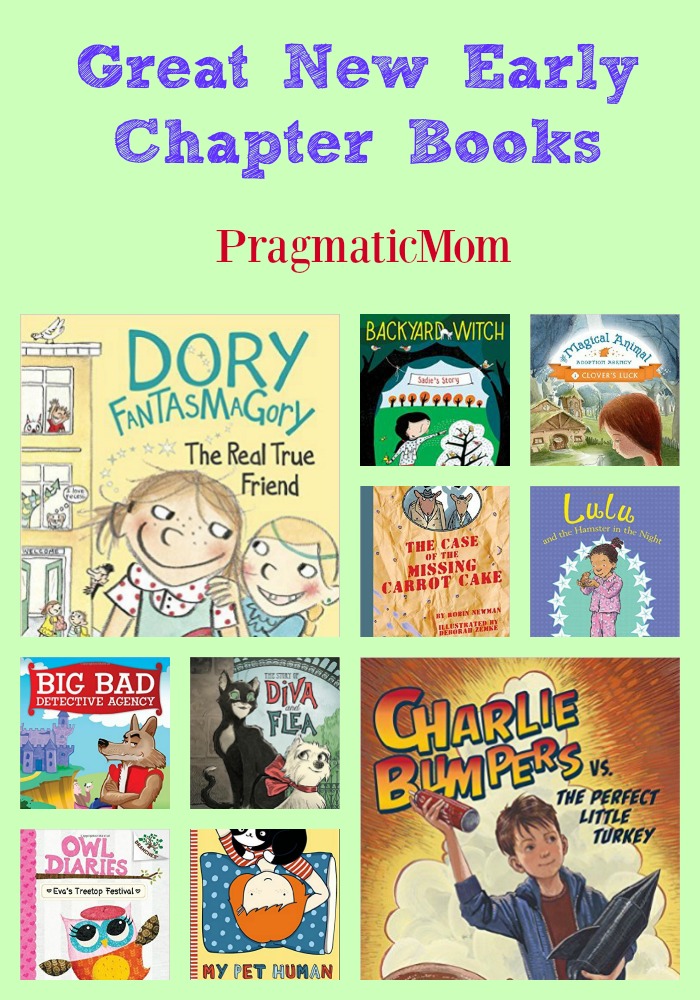 To keep track of each book, I kept notes on each book, rating it on a 5 point scale. I share my notes below of the books I liked the most (4.5 or 5/5). Our group then held online discussions via email on books that we liked, culminating in an online discussion to pick the short list. It’s interesting that  that strong reactions to books could go either way. A good example is The Case of the Missing Carrot Cake by Robin Newman … I loved the film noir detective story but not everyone agreed with me.  Charlie Bumpers vs. The Perfect Little Turkey is another book that I loved especially for its boy appeal — our list felt girl audience heavy — but our group tried to be gender neutral.

Scholastic Branches also sent me a pile of books for their new Early Chapter Book series. I read them all and my favorites are on the list below too.

What are your favorite Early Chapter Books? Please share!

The cover art is unfortunate as Clover’s head looks really oversized relative to her hands. The proportion makes her look deformed and makes the tiny horse look like a drawing error. The interior illustrations are in a different and more appealing style. Still, I loved the premise of this book of magical realism.

In this story, Clover believes she is cursed with bad luck. Still, she stumbles into a magical part of the forest where there is an pet shelter for magical animals … unicorns, dragons and the like. She ends up getting a part time job caring for the animals and is challenged with making sure each finds the right home which is harder than it sounds because there’s a nasty witch involved. (5/5) [early chapter book, ages 7 and up]

My Pet Human by Yasmine Surovec

Who is the pet? In this story, the stray cat tells the story of adopting a human in a charming, well executed, and well paced book. There a graphic novel sense to the book in which dialogue bubble cartoons take up most of the page making it appealing to reluctant readers. The story also would appeal to boys and girls equally. It has a funny yet moving point of view. (5/5) [early chapter book, ages 6 and up]

The Case of the Missing Carrot Cake by Robin Newman, illustrated by Deborah Zemke

Like an old-time detective movie, this book oozes with a kid friendly film noir. Wilcox and Griswold are mice detectives and as tough and scrappy as cop on the streets. Their beat is a farm and they are called in when food goes missing. With every little detail perfect, this book is perfectly paced and captivating. Fans of Nate the Great will like this new series. (5/5) [early chapter book, ages 6 and up]

There are some illustrations but this reads more as a chapter book than an Early Chapter Book to me. Bill Harley captures perfectly what it’s like to be a middle child, stuck with an annoying cousin on Thanksgiving weekend. Charlie Bumpers is an appealing character that reminds me of Alexander in the When Alexander Was Rich series. This will appeal to boys but if girls give it a chance, they will be drawn in too. (5/5) [early chapter book, ages 8 and up]

Dory and the Real True Friend by Abby Hanlon

Dory takes imaginative play to a whole new level in this hilarious series. She’s going to school for the first time so she considers leaving her invisible friend Mary home in order to make a real true human friend. There are lots of choices in her class. George is game to play her way, but Dory focuses in on Rosabelle who seems like she is into creative play too. While Rosabelle has created a princess world for herself, it turns out that there is plenty of room for Dory, Mary, Mr. Nuggy and that horrible Mrs. Gribble Grabble to join in, as well as knights, dragons, horses and plenty of monsters. (5/5) [early chapter book, ages 6 and up]

A clever, funny and delightful spin on fractured fairy tales. The Big Bad Wolf is stereotyped and falsely accused of trashing the three little pigs’ homes. Mama pig’s other son, Little Pig, insists on helping the Big Bad Wolf. He has 24 hours to solve the case or it’s a lifetime of porridge for the wolf in the dungeon. This is a clever, funny and unexpected take on fairy tales with the ending, a satisfying surprise. (5/5) [early chapter book, ages 7 and up]

Lulu and the Hamster in the Night by Hilary McKay

This is exactly the kind of Easy Chapter book that I wish there were more of. Lulu and Mellie just happen to be girls of color but that’s not the point. Their adventure as rescue pet adopters goes amok when they stay at their nan’s house and decide to hide their hamster during their weekend stay. It’s not easy taking care of a hamster in secret! (5/5) [early chapter book, ages 6 and up]

This book was a nice surprise. It perfectly blends realistic fiction, fantasy and science into a story about a girl whose two best friends are vacationing together without her for four days. During her alone time, she discovers a witch living in her backyard playhouse. Sadie can see the diminutive witch but no one else seems able to. The witch, Morgan (Mrs. M) is trying to find her old best friend/neighbor who turned into a yellow bird.  In helping Mrs. M, Sadie learns a lot about bird watching during the four days they spend together. (4.5/5) [early chapter book, ages 6 and up]

This is a funny book with a strong and wildly imaginative strong girl character. She’s not as loopy-in-a-good-way as Dory Fanstasmory, but this book is also a fun read that girls with younger siblings can relate to. I especially liked the realistic reactions of Pistachios family and peers when she “discovers” she’s a princess. Clementine and Ivy and Bean fans will love this. (4/5) [early chapter book, ages 6 and up]

Piper Green and the Fairy Tree by Ellen Potter, illustrated by Qin Leng

Piper Green is missing her brother who goes to high school on the mainland and doesn’t live at home anymore. Her coping mechanism is wearing his ear muffs even though it’s not cold. Adjusting to life without her older brother is tough, but when she ditches school to avoid her teacher’s wish to remove her ear muffs, she finds a surprise on her island that helps her get over this big change in her life. A charming story set in an island off Maine. It’s a Early Chapter Book version of One Morning in Maine. (4/5) [early chapter book, ages 6 and up]

The Story of Diva and Flea by Mo Willems, illustrated by Tony DiTerilizzi

Mo Willems’ stay in Paris resulted in this charming story about a pampered and very cautious dog and her new stray cat friend. Together, they explore the ups and downs in the life of a flâneur (someone who wanders the streets and bridges and alleys of a city just to see what is going on). [early chapter book, ages 6 and up]

My co-judges prefer Hamlet in its original form, but I find that Hamlet, because it’s such a complicated story, is helpful retold in this shorter illustrated version. My older kids who are reading Shakespeare agree; they liked this easy to read version so much that they picked it off my desk and read it. [early chapter book, ages 7 and up]

Pedro from the Katie Woo series branches off on his own. Like the Katie Woo series, each chapter is a discrete non-connected adventure. Here, Pedro catches bugs for a class science project, tries out as soccer goalie, solves mysteries and runs for class president. Thorough it all, it’s clear that Pedro is a kind, thoughtful and hardworking friend which makes him a first grade hero! [early chapter book, ages 6 and up] I reviewed one book from each of the Scholastic Branches series and these are my favorites.

This is a really appealing notebook novel that seems really popular with girls. It was under serious discussion to make The Cybils short list but got edged out probably because the plot was a little too predictable.

Eva Wingdale wants to plan a big Bloomtastic Festival at school but does not like to ask for help. Still, this is a big project that one young owl can do by herself. Will Eva learn to let go of a little control in order to get the festival done? [early chapter book, ages 6 and up]

Drake apparently has the heart of a dragon and gets chosen by the king to become a dragon master. Drake didn’t even realize that dragons existed but now he has to connect with his dragon and find a way to help his dragon unleash his power. [early chapter book, ages 6 and up]

Sam’s school is alive. It’s a living, breathing beast with evil intent and only the hall monitor can keep it in check. With the help of his friends, Sam must stop his school from destroying the actors in the class play because the show must go on! [early chapter book, ages 6 and up]

The previous year’s Cybils, I was drawn to funny chicken books such that I might just have a thing for funny chickens:

The Chicken Squad: The First Misadventure

The Kung Pow Chicken series fits the funny chicken book bill for me. Gordon Blue is like the Captain America of chickens. When he fell into a vat of toxic sludge, he gained super powers which are brought to good use when they discover the evil Granny Goosebumps denuding the chickens of their feathers at the Fowl Fall Festival. They uncover her scheme to sell sweaters to every cold chicken in town. [early chapter book, ages 6 and up]

Monkey and Me and the Golden Monkey by Timothy Roland

I like this book’s format of part graphic novel and part early chapter book with additional illustrations breaking up text heavy pages. The premise would appeal to kids who can’t sit still; Clyde turns into a monkey when he gets excited and his twin sister Claudia has to cover for him at their school trip to the museum because who is going to believe that her brother is a monkey? Things get exciting when an golden relic gets stolen and only Clyde knows who did it. [early chapter book, ages 6 and up]