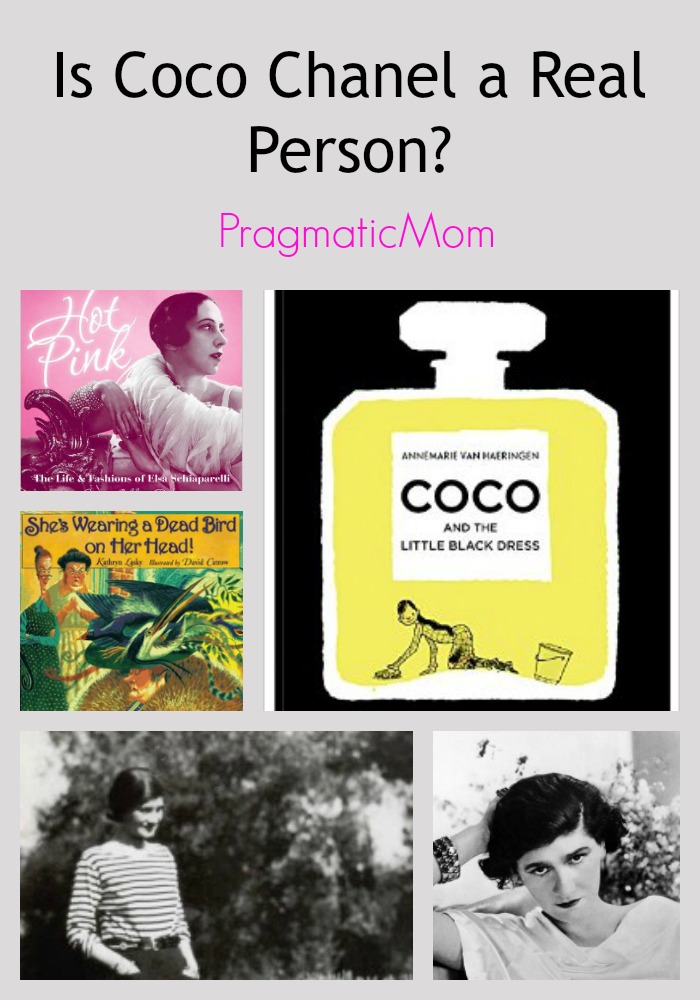 PickyKidPix who is now in 8th grade surprised me with this question: Is Coco Chanel a real person? First of all, how does she even know about Chanel? I think she watches too many YouTube beauty bloggers. And secondly, how strange that she only knows Chanel as a brand name because in fact, she knew Chanel by the handbags and make up. I just happened upon this picture book at the library and gave it to my daughter who was delighted to read it.

Coco and the Little Black Dress by Annemarie Van Haeringen

Gabrielle “Coco” Chanel was very good at sewing, which she learned at the convent orphanage. Her first foray into designing was millinery, because she detested the dead birds on women’s hats which were all the rage. She ventured into fashion design, creating modern clothes that were comfortable and functional, while still being chic. She is also known for her famous perfume: Chanel No. 5. From iconic tweet suits to little black dresses to perfume, Coco Chanel’s legacy endures.

This picture book biography uses lovely whimsical drawings to portray Coco Chanel as a cross between Madeline and Cinderella. She was a little more complicated than this though this cut of her life is appropriate for a young audience. [picture book, ages 5 and up]

The plume trade (Plume hunting is the hunting of wild birds to harvest their feathers)  was at its height in the late 19th and was brought to an end in the early 20th century.

By the late 19th century, plume hunters had nearly wiped out the snowy egret population of the United States. Flamingoes, roseate spoonbills, great egrets and peafowl have also been targeted by plume hunters. from Wikipedia

She’s Wearing a Dead Bird on Her Head by Kathryn Lasky, illustrated by David Catrow

This picture book speaks to the fashion of the times in 1896 when women wore dead birds on their hats both in Europe and in the United States. Two American women, Harriet Hemenway and her cousin Minna Hall, took a stand against this, forming the Massachusetts Audubon Society. [picture book, ages 5 and up]

Hot Pink: The Life and Fashions of Elsa Schiaparelli by Susan Goldman Rubin

Coco Chanel was Elsa’s dinner guest, and this picture book makes a few mentions of her but doesn’t allude to their adversarial relationship. In many ways, they were polar opposites but competing for the same wealthy clientele.

Elsa Schiaparelli’s flamboyant creativity was the underpinning for her unconventional life. Born into a wealthy Italian family, her plain looks made her dream up ways to be pretty. As a single mother with a daughter with polio, she fell into dressmaking under the tutelage of Paul Poiret. Her bold creations caused a sensation both in Europe and the United States, and her business flourished even during The Great Depression. WWII, however, was a different story. Working to support the Allied forces in France and the United States, Elsa returned to fashion after the war to a different environment in which her designs no longer shocked. The woman who popularized Shocking Pink bowed out in retirement in 1954, but her mark on women’s fashion is enduring. [advanced picture book, ages 10 and up]

I asked my daughter if she liked the picture book biography and she said that she did not. I had already given her Coco’s life synopsis in a more People magazine kind of way. So let me share that with you:

Coco Chanel’s legacy is a complicated one; a fashion icon versus anti-Semite Nazi spy. While she, without a doubt, had a terrible childhood, she was also not known to be a nice person, which is putting it mildly. Like her or not, she was a survivor who placed her stamp on history. I leave you with some of her most famous quotes:

The most courageous act is still to think for yourself. Aloud.

A women who doesn’t wear perfume has no future. 2 thoughts on “Is Coco Chanel a Real Person?”