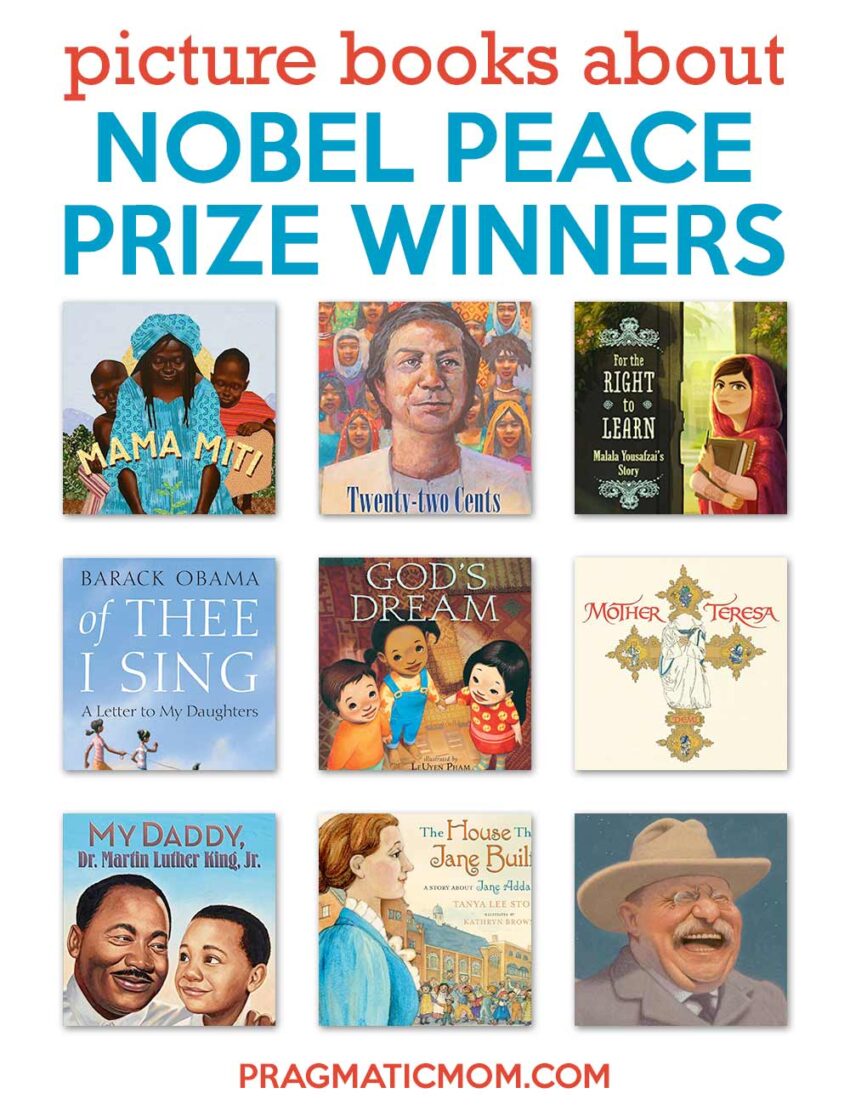 Some the picture books are biographies, others are their own books reflecting their philosophies but presented to children. Perfect, right? I hope it inspires a new generation of activists who believe they can change the world. Because I know that they can.

9 People Who Changed The World:

Mama Miti: Wangari Maathai and the Trees of Kenya by Donna Jo Napoli

In 2004, Wangari Maathai became the first African woman to win the Nobel Peace Prize for her contribution to sustainable development, democracy, and peace.

Wangari Maathai founded the Green Belt Movement, an African grassroots organization that has empowered many people to mobilize and combat deforestation, soil erosion, and environmental degradation. Today more than 30 million trees have been planted throughout Mama Miti’s native Kenya. [picture book, ages 4 and up]

I have three other picture book biographies on Wangari Maathai on Top 10: Best Picture Books for Spring and Planting a Garden.

Muhammad Yunus and Grameen Bank won the 2006 Nobel Peace Prize for their efforts to create economic and social development from below.

Muhammad founded Grameen Bank where people could borrow small amounts of money to start a job, and then pay back the bank without exorbitant interest charges. These micro-loans changed the lives of millions of impoverished people by loaning the equivalent of more than ten billion US dollars. [picture book, ages 6 and up]

Muhammad Yunus is included on this list of Great Biographies for Kids By Paula Yoo.

Malala Yousafzai received the Nobel Peace Prize in 2014 for her struggle against the suppression of children and young people and for the right of all children to education. She is the youngest Nobel Peace Prize winner, winning at age 17. Her story includes the bravery of her father, Zuayddin Yousafzai, who believed girls deserved the same educational opportunities as girls. Malala blogged for the BBC about the school closings in Pakistan. It was an act of defiance that would have violent repercussions, but nothing would stop Malala from advocating for education for girls. She is the voice for equal education for children everywhere. [picture book, ages 8 and up]

Of Thee I Sing: A Letter to My Daughters by Barack H. Obama, illustrated by Loren Long

Barack Obama won the Nobel Peace Prize in 2009 for his extraordinary efforts to strengthen international diplomacy and cooperation between peoples.

He pens a letter to his daughters that references role models and the trait they inspire: Georgia O’Keeffe, Albert Einstein, Jackie Robinson, Sitting Bull, Billie Holiday, Helen Keller, Maya Lin, Jane Addams, Dr. Martin Luther King, Jr., Neil Armstrong, Cesar Chavez, Abraham Lincoln, and George Washington. This love letter to his daughters is also a gift to all readers with a message of inspiration, diversity, and inclusion. [picture book, ages 4 and up]

As easy as sharing, loving, caring.

As easy as holding hands, laughing.

As easy as knowing we are family

because we are all God’s children.

This lovely picture book celebrates diversity and points to a path towards joy, inclusion, and understanding. It’s a simple message that will resonate with children and adults alike. [picture book, ages 4 and up]

Mother Teresa received the Nobel Peace Prize in 1979. She helped the poor while living among them. She founded the Missionaries of Charity, and through this organization, built homes for orphans, nursing homes for lepers, and hospices for the terminally ill in Calcutta, and also did aid work in other parts of the world.

I never knew that Mother Teresa was born in Skope, Yugoslav Macedonia. Her life is detailed in this gorgeously illustrated picture book, from the moment she knew her calling, at age 12, to her death at age 87. Her many gifts included a facility in learning languages, leadership, and organizational skills, but most importantly, her capacity to love and assist selflessly. [advanced picture book, ages 8 and up]

Dr. Martin Luther King, Jr. received the Nobel Peace Prize in 1964 for his nonviolent campaign against racism. He was killed by a white racist four years later.

Martin Luther King III (“Marty”) was five years old when his father gave his famous speech in Washington D.C., “I have a dream …” Though he was terrified when his father was arrested, he learned that his father went to jail to help others who are less fortunate. Marty marched alongside his father; his father’s courage made him feel safe. When Marty was in third grade, he would be a recipient of his father’s and other’s Civil Rights Movement work; he would be going to a newly desegregated school. Marty’s father gave his life for his dream of kids attending the same schools, not being judged by the color of their skin. In this loving memoir, Marty shows us another side of the Civil Rights Movement icon: that of a devoted and playful father making the world better for his kids as well as all children. Marty was only 10 years old when his father was killed. He, too, is a human rights advocate and community activist. [picture book, ages 6 and up]

The House That Jane Built: A Story About Jane Addams by Tanya Lee Stone

Jane Addams was the second woman to receive the Nobel Peace Prize in 1931. She founded the Women’s International League for Peace and Freedom in 1919, and worked for many years to get the great powers to disarm and conclude peace agreements.

Focusing on Jane Addams’ vision of a community center to meet the needs of the poor, this picture book reveals that Jane dreamed of living “right in the midst of horrid little houses” to find a way to help the poor. Jane’s creation of a settlement house, Hull House, tackled and solved issues that poor immigrants faced. A safe place for children to play was met with the first playground in Chicago. Long working hours for parents was solved with morning kindergarten and after-school clubs. No running water in houses compelled her to build a public bath.

Jane’s other accomplishments are in the back notes of this picture book. It included a founding member of both the National Association for the Advancement of Colored People (NAACP) and American Civil Liberties Union (ACLU). She also worked for women’s suffrage and spoke out against war. [picture book, ages 6 and up]

To Dare Mighty Things: The Life of Theodore Roosevelt by Doreen Rappaport, illustrated by C.F. Payne

In 1906, Theodore Roosevelt was the first American to win the Nobel Peace Prize. It was awarded to him for settling the war between Russia and Japan.

Roosevelt’s accomplishments included leading the Rough Riders in Cuba, breaking up large business trusts, conserving America’s natural resources, and creating the Panama Canal. As a sickly boy with a great interest in the natural world, Teddy Roosevelt strengthened his body so that he could pursue his myriad of interests. Ignoring doctor’s orders to live a quiet life or die an early death, Teddy lived without regrets, until he died at sixty-one. No one — Presidents included — would disagree: