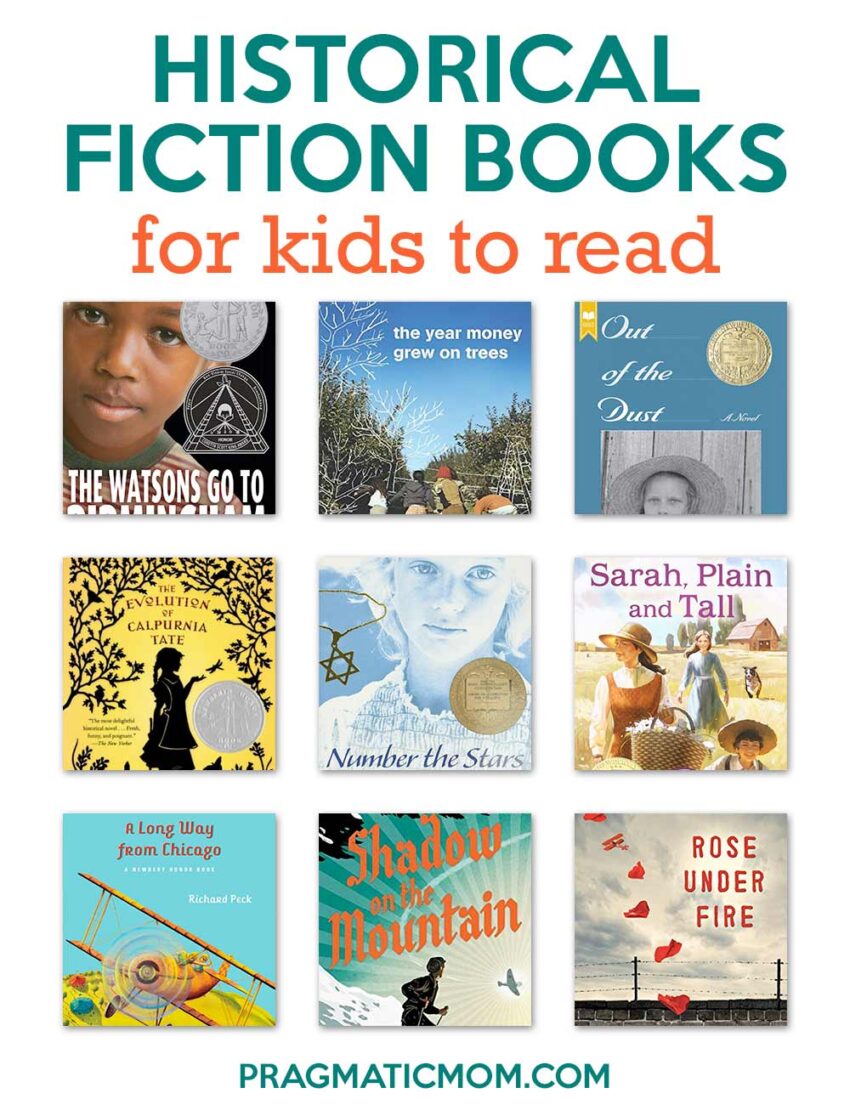 Please welcome author Deborah Hopkinton who is guest posting with her favorite historical fiction books for kids. She also has a new book out, A Bandit’s Tale, and we’re doing a giveaway too below! A Bandit’s Tale by Deborah Hopkinton

Eleven-year-old Rocco finds himself alone in New York City after he’s sold to a padrone by his poverty-stricken parents and forced to leave his small Italian village. While working as a street musician, he meets the boys of the infamous Bandits’ Roost, who teach him the art of pickpocketing, which he finds more lucrative than banging a triangle on the street corner. But when he meets Meddlin’ Mary, an Irish immigrant who has a strong heart and a fierce commitment to helping the city’s horses, he begins to reexamine his life—and take his future into his own hands.  [chapter book, ages 8 and up] [middle grade, ages 8 and up]

My new book, A Bandit’s Tale, is historical fiction, a genre I’ve loved since childhood. I like being transported into a different time and place and seeing how other writers play with history.

In A Bandit’s Tale, we decided to use historical photographs as part of the design to help convey the setting for young readers.  I got the idea for another historical fiction title, The Great Trouble, by reading a nonfiction title, The Ghost Map, about the 1854 cholera epidemic in London.

Perhaps because I also write nonfiction, I have to try hard not to go overboard in weighing the reader down with historical details that don’t pertain to the story.  But I do tend to pack a lot into my back matter and author’s notes for those readers curious to know more.

It’s not easy to narrow down my own favorites in this genre.  I chose these ten historical fiction titles for young readers (in alphabetical order by author) in part because of my personal connections to them.

1. The Watsons Go to Birmingham- 1963 by Christopher Paul Curtis

The story of Kenny and his family’s trip from Flint, Michigan to Birmingham, AL, and the bombing of the 16th Street Baptist Church on September 15, 1963, remains one of the most important civil rights novels ever written for children. When I had the chance to teach children’s literature at Whitman College, where I worked in administration, I chose this book. [middle grade, ages 9 and up]

2. The Year Money Grew on Trees by Aaron Hawkins

This delightful debut novel chronicles the story of a boy and his friends in 1980s New Mexico who turn an abandoned apple orchard into a paying proposition. A perfect read-aloud and great for STEM connections, this is a personal favorite. [middle grade, ages 10 and up]

3. Out of the Dust by Karen Hesse

Another classic, this novel in free verse set in the Dust Bowl won the Newbery Medal in 1998. At author visits, I routinely show students photos of a museum hearth that inspired one of James Ransome’s illustrations for our first book together, Sweet Clara and the Freedom Quilt. Whenever I do, I think about the tragic kitchen accident at the heart of Hesse’s moving novel. [novel in verse, ages 12 and up]

4. The Evolution of Calpurnia Tate by Jacqueline Kelly

Set in 1899 Texas, this novel follows the trials and tribulations of Calpurnia Tate, the only girl in a family of six brothers. My favorite parts are her natural history explorations with her grandfather, a follower of Charles Darwin, and the Darwin quotes that grace each chapter. (And yes, I’ve written about Darwin myself, including a nonfiction biography in the Who Was series: Who Was Charles Darwin?) [middle grade, ages 9 and up]

5. Number the Stars by Lois Lowry

This Newbery-winning fictionalized account of the Danish resistance was one of my daughter’s favorite books as a child. I had the chance to explore some of the real people who inspired several of the characters when writing my nonfiction title, Courage & Defiance, about the same time period. [middle grade, ages 10 and up]

This classic novel about a mail-order bride from Maine, which won the 1986 Newbery Medal, will always claim a place in my heart. As a girl, I grew up in New England, and we sometimes went to the Maine coast. This book came out just as I was beginning my own career as a writer, and it remains an inspiration. [chapter book, ages 8 and up]

7. A Long Way from Chicago by Richard Peck

This “novel in stories” about two children who visit their grandmother during the summer in rural Illinois won a Newbery honor in 1999. We lived in rural eastern Washington for a time while my two children were growing up, and I have a vivid memory of driving across Washington State with my son while listening to this humorous, heartfelt book. [chapter book, ages 9 and up]

8. Shadow on the Mountain by Margi Preus

Margi Preus won a Newbery honor for her book, Heart of a Samurai, another riveting historical fiction work. Here she takes readers into the World War II occupation of Norway by Nazi Germany.  I loved this dramatic story and am reading all I can about this period. In addition to my WWII nonfiction, I’m planning to write an espionage novel set in 1944. [young adult, ages 12 and up]

9. Rose Under Fire by Elizabeth Wein

This searing young adult World War II novel set, in part, in Ravensbrück concentration camp, is another title I had the opportunity to review in galley form for Bookpage. Wein combines compelling storytelling with well-researched details to make an unforgettable reading experience. [young adult, ages 14 and up]

The second novel in Wiles’s award-winning Sixties Trilogy takes place in 1964 in Greenwood, Mississippi. I love all of Debbie’s work, especially how she has broken new ground with documentary novels that seamlessly combine historical artifacts with amazing and compassionate storytelling. [middle grade, ages 10 and up] To enter to win a copy of A Bandit’s Tale, please enter the Rafflecopter below.