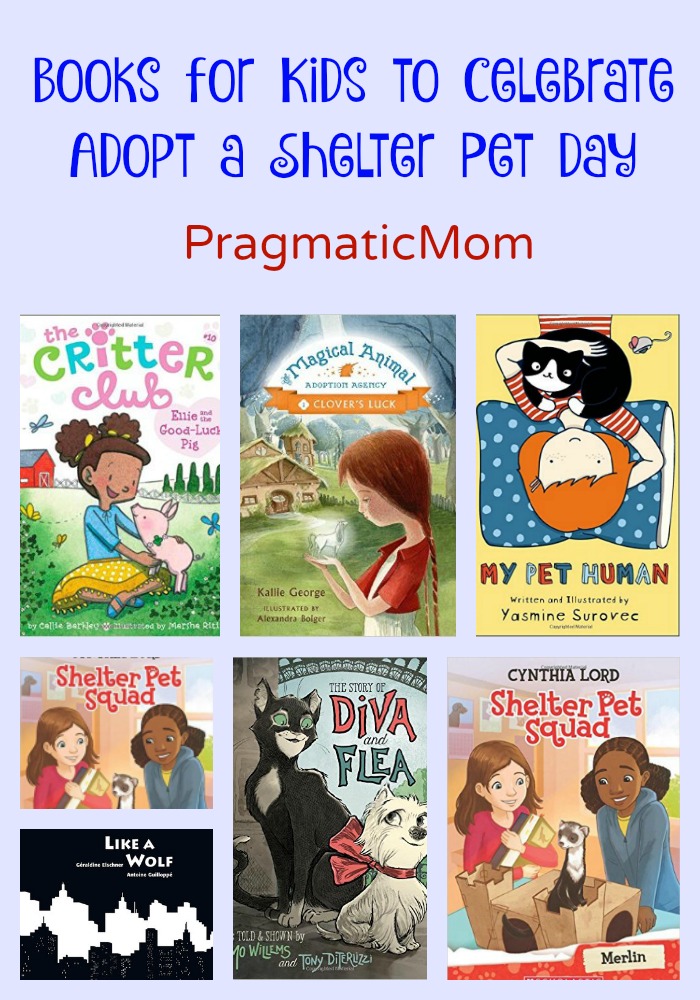 There’s no such thing as a bad dog, just a bad owner.

John Grogan, Marley and Me: Life and Love With the World’s Worst Dog

National Adopt a Shelter Pet Day is tomorrow, April 30.  This day was created as a way to raise awareness for thousands of pets that are waiting for (and needing) adoption from the shelters.

It isn’t always easy to adopt a pet through a shelter as I found when we were ready for a dog five years ago. Puppies were hard to come by in the pet shelters locally. The breeds there also weren’t recommended for families with small children.

It wasn’t always possible to meet the dog before adopting it. I think it takes patience and perseverance to find the right pet through a shelter, but it seems well worth the effort based on the rescue dogs and owners that I’ve met through the dog park. Pet shelters also turn out to be popular in Early Chapter Books this year.

How about you? Have you ever thought of adopting a pet from an animal shelter? What are you favorite books about adopting pets? Thanks for sharing!

Kaita Takano and her family foster pets as well as takes care of their dog Ollie, a dachshund, who is also a rescue. They have their hands full with Truman, a black lab with destructive tendencies. When it’s time to find Truman a forever home, it’s hard to let go.

This is an endearing series about pet rescue. My only criticism is the portrayal of the Takano family whose very large and round eyes and skin tone look more Latino than Japanese. An Asian illustrator might be more cognizant and nuanced about portraying a Japanese family more accurately. [early chapter book, ages 5 and up]

Ellie and her friends run an animal shelter in Ms. Sullivan’s barn. A new pig arrives and makes Ellie think she has extraordinary good luck so she’s worried that her lucky streak will end when the pig gets adopted.  This is a sweet story that would appeal to girls. [early chapter book, ages 6 and up]

The volunteers at the Shelter Pet Squad are mixed ages. The youngest, Suzannah, is just 7 and a half. Her young age comes into play throughout the book as she’s too young to participate in the Adopt a Pet a Thon event without a parent. She also finds the books on ferrets to be a little advanced for her. She doesn’t want to seem like a baby in front of the older kids, but learning to take care of the new ferret is challenging. Is Suzannah just too young for the Shelter Pet Squad? [early chapter book, ages 6 and up]

Clover stumbles on an animal adoption agency in the woods near her house. This pet shelter is special because it cares for mystical animals like dragons and unicorns. Clover agrees to help out, but she has her hands full trying to run the shelter on her own when the owner is away. Still, she discovers that she has special talent is matching the right pet to the right pet owner. But can she protect the animals from an evil witch who is trying to steal them? [early chapter book, ages 6 and up]

My Pet Human by Yasmine Surovec

This is a story from the point of view of a stray cat adopting a human. It’s a charming, well-paced story that feels like a graphic novel because dialogue bubble cartoons take up most of the page. It would appeal to reluctant readers, both boys and girls, because it’s a funny yet moving with drama and lots of love. [early chapter book, ages 6 and up]

The Story of Diva and Flea by Mo Willems, illustrated by Tony DiTerlizzi

Diva is a pampered Parisian dog who is afraid to stray outside the confines of her home. Flea is a flâneur — someone who wanders the streets and bridges and alleys of the city just to see what there is to see. Diva is intrigued but nervous. Flea is curious and nervous about Diva’s life too. Breck-Fest, in particular, intrigues him. Together, they explore this opposite perspective until they figure out a way to merge the two together. [early chapter book, ages 6 and up]

“This had a lot of elements that were interesting; scenes at the fire station, volunteering with an animal shelter, a beloved grandmother, and of course, dogs and football. Middle school is a minefield of interpersonal relationships, so it was interesting to see Cyrus’s understanding that for his own good, he should hang out with the football team, even though he doesn’t much like them. Of course, it is even better to show him realizing WHY he doesn’t like them, and challenging their treatment of a fellow student he likes. It’s good to see this sort of behavior modeled in books. It’s also interesting that Cyrus struggles with reading but is trying to get better.” [middle grade, ages 8 and up]

Lola Gets a Cat by Anna McQuinn, illustrated by Rosalind Beardshaw

Lola wants a cat so she learns about cats and how to take care of them. She and her mommy go to a cat shelter to find a cat and a kitten chooses her! There’s a lot to do to get ready for a new pet. When her kitten comes home, Lola knows just what to do. A gentle story about rescuing a kitten from a pet shelter and the responsibilities to be a good cat owner. [picture book, ages 2 and up]

The Lost Kitten by Lee, illustrated by Komako Sakai

Hina and her mother find a lost kitten at their door with gooey eyes. The mother cat seems to asking them to take care of her kitten. Hina would rather have a kitten from a pet store, but she helps her mother set up a space for the kitten and take care of it. She checks on the kitten but it’s disappeared. Hina remembers when she was separated from her mother in a store. She thinks the kitten might be feeling lost and scared too. Distraught, she decides to search for it, and discovers it, finally, snuggled in her sweater. A lovely picture book to inspire cat adoption from a pet shelter. [picture book, ages 4 and up]

Raised in harsh circumstances and languishing in a dim kennel, this is a lonely dog whose only wish is for freedom and friendship. Because of the dog’s appearance — pointed ears, sharp teeth — everyone passed it by looking instead for a “good dog.” Until one day, a man appeared and treated it with kindness. He recognized the good dog inside as a shepherd’s dog. [picture book, ages 4 and up]

Sal has been at the shelter for a long time and at visiting day today, hopes to find a forever home. Sal and his friends impart through this story lessons to readers that it’s best to adopt pets from shelters, rather than buy them from stores, and that all animals deserve love, dignity, and respect, no matter their age or health. This is good to buy on Adopt a Shelter Pet Day because 10% of profits will go to support animal rescue groups and shelters. [picture book, ages 4 and up]

Dog Days in the City by Jodi Kendall

“There is never a shortage of books about animal shelters and children who want to take care of animals, but there is never a shortage of readers for them, either. Most animal obsessed readers would be thrilled to have seven puppies arrive unbidden on their doorstep, even if it means quite the outlay of money for food and puppy pads! It was interesting to see Josie’s thoughts about quitting gymnastics, and her light romance with Scully was fun as well.” [middle grade, ages 8 and up]