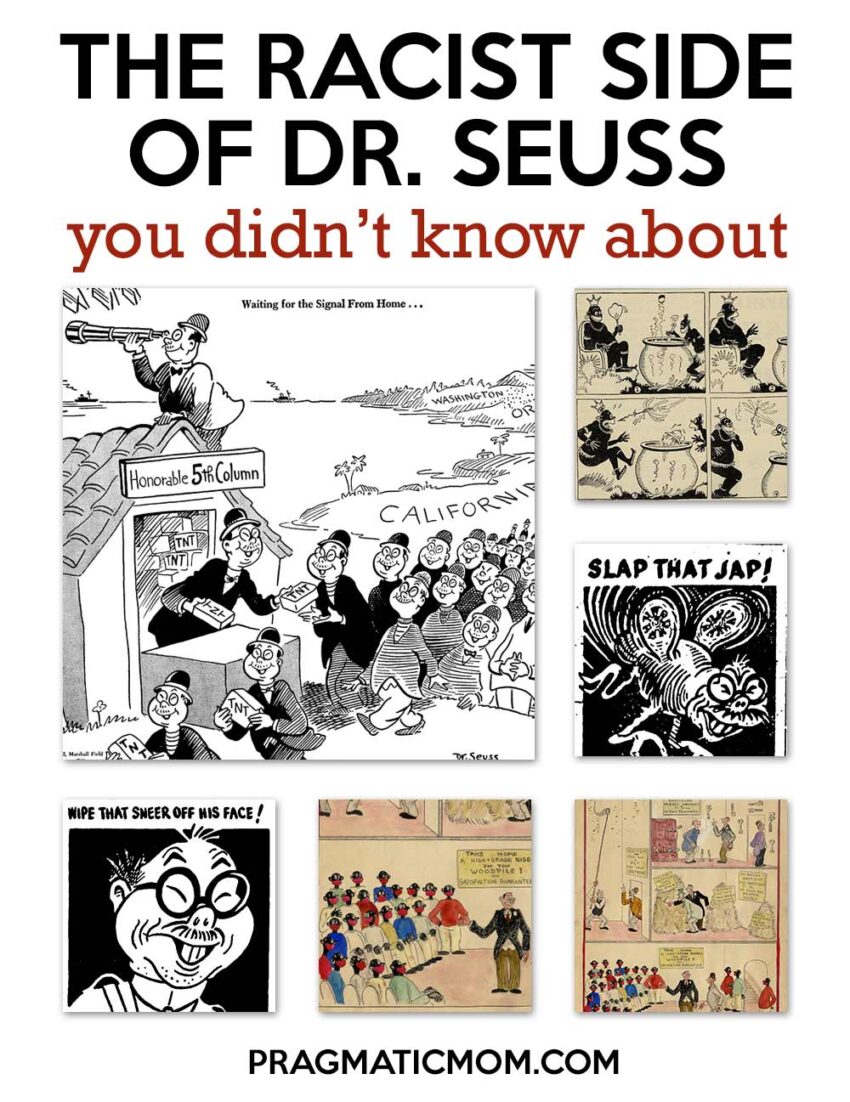 Before Dr. Seuss was famous, he drew racist political cartoons during the 1920s through the 1940s. Was Dr. Seuss himself a racist, or did he just draw these cartoon for a paycheck? He was a racist. Geisel himself was vocally anti-Japanese during the war and had no trouble with rounding up an entire population of U.S. citizens and putting them in camps.

But right now, when the Japs are planting their hatchets in our skulls, it seems like a hell of a time for us to smile and warble: “Brothers!” It is a rather flabby battle cry. If we want to win, we’ve got to kill Japs, whether it depresses John Haynes Holmes or not. We can get palsy-walsy afterward with those that are left.

Geisel was hardly alone in such beliefs but it’s still disconcerting to see ugly cartoons like these drawn in the same hand that did The Cat in the Hat. from Open Culture Rather than in World War II where the Germans were seen as innocent, but led by an evil ruler, Hitler, the Japanese were all equally seen as evil, from the common citizen to the emperor. The distinguishing characteristics were also seen in Japanese-Americans, which caused the hatred and racism to extend from the Japanese to the Japanese-Americans. Attitudes such as these that classified all Japanese as the enemy allowed internment camps to be used and accepted by Americans, although just recently the American people had learned of the inhumane concentration camp the Nazi regime had used. from Dartmouth.edu His racist views were not limited to Asian Americans however. In his illustration, Dr. Seuss draws African Americans as apes in blackface. This drawing went to auction recently, where no one bought it. This panel, a hand-drawn, hand-painted illustration by Dr. Seuss that dates back to 1929, features individuals in blackface as objects for sale. It’s titled: “Cross-Section of The World’s Most Prosperous Department Store.” For those unfamiliar with Dr. Seuss’ [white] supremacist tendencies, we regret to inform you of his heavily documented penchants. Beyond this image, the author and illustrator drew anti-Japanese cartoons during World War II, and was wont to express his prejudiced views vocally. from The Huffington Post I personally don’t think that Dr. Seuss should be representing NEA (National Education Association) Read Across America program. Dr. Seuss’ heritage should be recognized in its entirety, and that includes his racist past. It’s amazing how this remains unknown to the general public. I only recently came across it when researching books for Banned Book Week but I have to say that I can’t look at Dr. Seuss in a favorable light anymore. 57 thoughts on “The Racist Side of Dr. Seuss You Didn’t Know About”