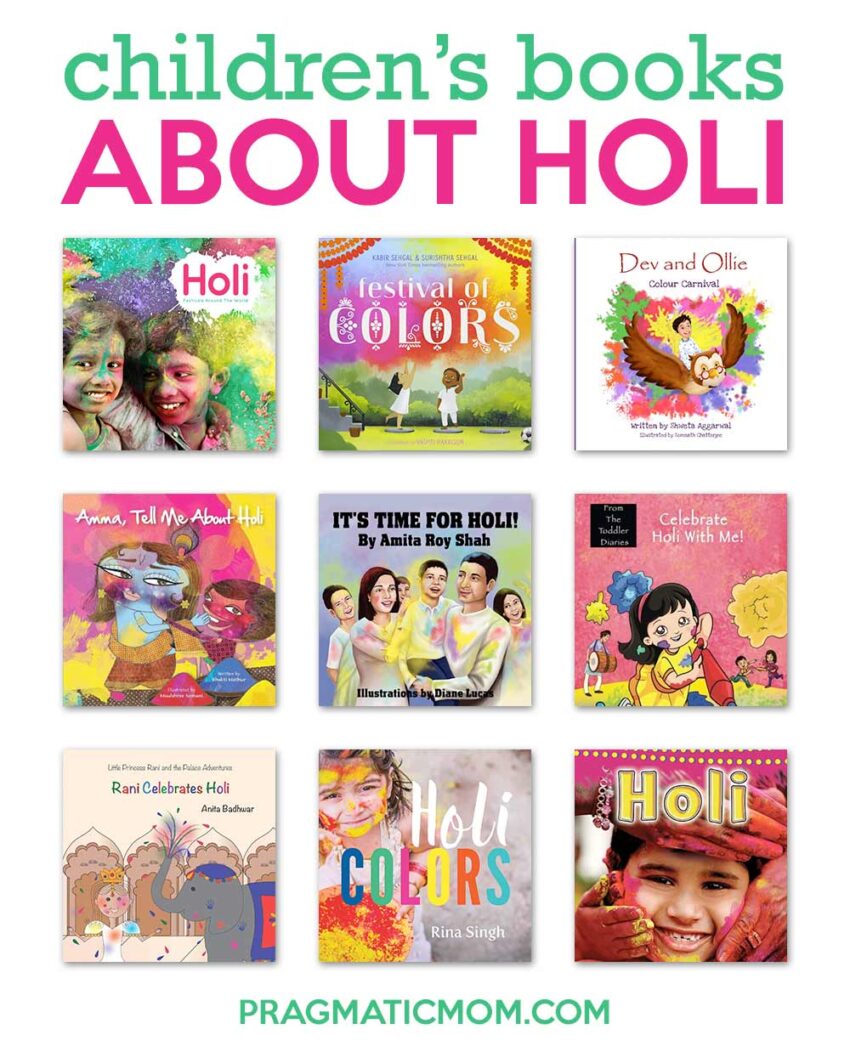 Today is Holi which I know very little about so I asked the author of Dev and Ollie: Colour Carnival to help me out. Please welcome my guest blogger today Shweta Aggarwal!

There’s only one thing that comes to mind immediately when the festival of Holi is mentioned – bright, vibrant colors everywhere! Holi is literally one of the most colorful festivals in the world because PEOPLE get colored! The spirit of Holi embraces everyone, bringing people together. Although this Hindu festival has been celebrated in India for thousands of years to commemorate the victory of good over evil, it has recently gained widespread popularity. Traditionally, the festival kicks off with a Holika bonfire on the eve of Holi where people dress in their finest clothes and sing and dance around the bonfire. The next day, on the contrary, everyone’s out on the streets wearing their shabbiest clothes because what’s in store is to get colored from head to toe! Dry colored powder, water pistols, and water balloons are a common sight when ‘playing Holi’.

According to Hindu mythology, the celebration of Holi came into existence when a young boy, Prahlad, saw the God Vishnu emerge victorious from a blazing fire! Pralad was the son of an evil King Hiranyakashap. When the king demanded that Pralad pray to him rather than God Vishnu, and Pralad refused, the king ordered his own son to be killed! The king’s sister Holika was granted a wish that fire wouldn’t harm her. So she coaxed Pralad to step into a bonfire with her. To everyone’s surprise, Holika burnt to ashes while Prahlad was unharmed and protected by God Vishnu.

Leaving the dark, religious & mythological background aside, Holi is a beautiful, fun, and ‘happy’ festival, yet there are only a handful of children’s books about Holi. This was one of the key reasons for me to write Colour Carnival, the 2nd book in the Dev and Ollie series.

Here are some books to learn more about Holi! Some books cover the religious and historical significance in-depth while others focus solely on the fun element of Holi.

Festivals Around The World: Holi by Grace Jones

The entire book is well put together with each section covering different aspects of Holi. The book starts with an introduction to the definition of a festival as well as some basics of Hinduism. It explains with great simplicity why Holi is celebrated with the story of Prahlad. The book also touches upon the reason for lighting up the Holika bonfire the previous evening.

Finally, one of my favorite aspects of a festival is included – the music and the food! This is a simple and informative non-fiction book for an introduction to Holi. And the little character Prieta in the book helps the readers with some Hindi terminology too. [picture book, ages 5 and up]

Celebrations in My World: Holi by Lynn Peppas

This is another non-fiction book that serves as a great introduction to Holi. Very similar to Festivals Around the World, this book covers the different aspects of Holi including the history, the religious significance, the spirit, and the music and food. In fact, there’s not one but three different mythological stories shared about why Holi is celebrated!

In addition, information about how Holi is celebrated in the Spring to welcome a new season and start the agricultural process is included. There are some great Did You Know facts mentioned too. [picture book, ages 8 and up]

This is an action-packed adventure story of a little boy Dev who doesn’t like messy play. In the hope that the festival of colors, Holi, will change Dev’s mind, his magical bedtime owl, Ollie takes Dev to India. But Ollie doesn’t have much luck. Dev’s adamant that he’ll only watch the festivities until he finds himself in the middle of a water balloon fight with some children. Then the story takes a turn. Facts about Holi are subtly weaved into the story along with a poignant message – never say never! The story also tells the loving and magical relationship of a child and his bedtime cuddly toy. [picture book, ages 4 and up]

Amma Tell Me About Holi by Bhakti Mathur

A fictional rhyming book that tells the story of Holi as a bedtime story by a mother to her son Klaka, it’s cleverly written and covers the story of Lord Krishna and Radha playing Holi and the dark story of Pralad in a child-friendly manner. The book ends with a lovely note when Klaka asks his mother what’s the best color of Holi. The mother’s response ties the story back to the spirit of Holi and the spirit of love. [picture book, ages 4 and up]

This is a simple fictional story narrated by a little boy who’s desperate for winter to end and see nature in its full glory again.  When Spring arrives and the little boy sees lush green grass, blue singing birds, and red roses, he relates the colors used whilst playing Holi to that found in nature. I liked the subliminal message in this book about the importance of appreciating the colors that surround us in nature. [picture book, ages 2 and up]

Celebrate Holi With Me! by Shoumi Sen, illustrated by Abira Das

Shoumi Sen tells the story of Holi in rhyme and describes how people celebrate it. There’s also a dictionary of terms at the end. [picture book, ages 4 and up]

If you’re not the kind to enjoy messy play, how do you escape getting covered in color during Holi? This is a sweet story of Princess Rani who’s eagerly waiting to celebrate Holi while her elephant Bindi feels quite the contrary. Princess Rani comes up with a clever idea on how to convince Bindi AND to get cleaned up afterward too! I liked the use of some Hindi terminology weaved seamlessly throughout the story.

Fiction or non-fictional, one common theme amongst all these books is that while playing Holi, all barriers are broken. Colors have an uplifting effect on us, putting everyone in a happy mood. So go play Holi and be happy … together!

p.s. A lovely Holi board book that I just discovered through judging the Cybils 2018 Picture Books and Board Books long list.

This board book uses photographs to show people enjoying the exuberant spring festival’s Rangwali Holi using colored powder and water to smear each other with color. The rhyming text highlights colors and relates each to an aspect of Indian culture. [board book, ages 2 and up]

Durga Puja and the Festivals of India 17 thoughts on “Children’s Books on Holi, the Hindu Spring Festival”