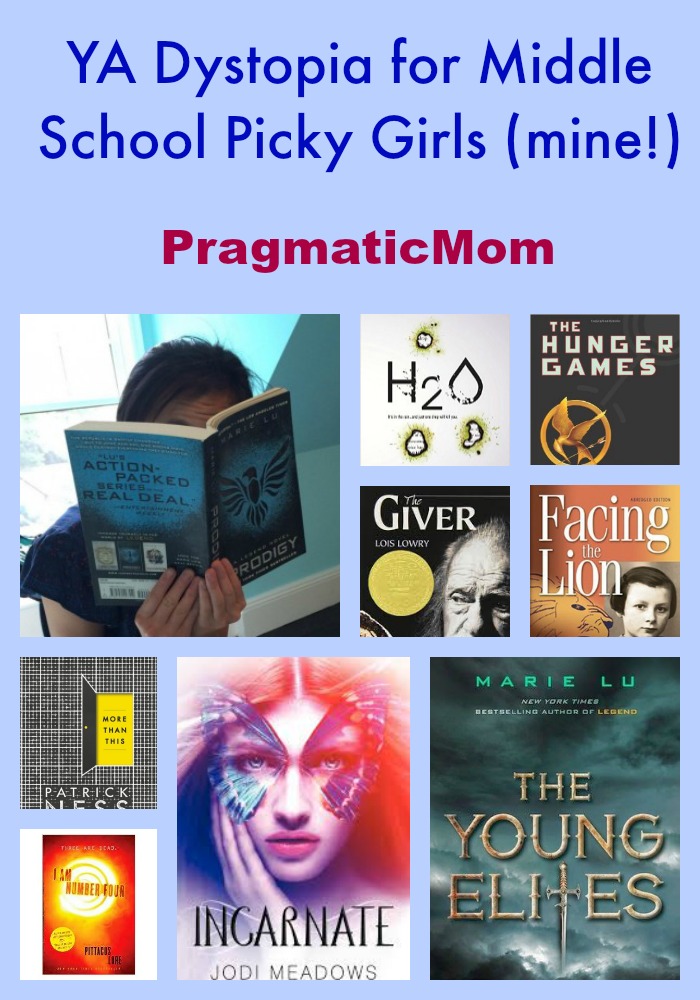 PickyKidPix has very specific tastes in books. She likes realistic fiction and dystopian, and that’s it. No fantasy, nonfiction, or action adventure for her. No Percy Jackson (boring), Harry Potter (snooze), or even YA chick lit romance. She also likes her realistic fiction be pretty dramatic. Special needs characters are a plus for her.

Even with such a limited range of books, her blog has garnered a lot of traffic for her book posts. Her third grade book list written as a third grader generally spends time on the page 1 of a google search.

4th Grade Books I Liked When I Was In 4th Grade

Top 10: Best Books for 3rd Grade by Me (A Third Grade Girl Who is Very Picky)

Now that she’s reading YA dystopia which is not my cup of tea, I am at a loss to find her more books. And god knows that I stress out when she doesn’t have any books to read, because reading is a low on her priority list. Luckily, my Instagram followers were willing to assist me.

This is the first dystopian series I read in 4th grade.

The Giver series by Lois Lowry

I read the first book in 6th grade in English grade and read the rest of the series in 7th grade. This is my favorite series of all time.

I read these books in 7th and 8th grade and it shares the title of my favorite series of all time.

I Am Number Four series by Pitticus Lore

I read this book in 7th grade and I thought it was really good. I started the second book and I’m not sure if I am going to finish the series.

My sister read this series. I watched the first two movies and I thought the movies were pretty good. I am not planning to read this series because I already saw the movies. Also, some of my friends did not recommend it.

She is currently reading:

My dad really likes this book. I think it’s one of his favorites. I saw the trailer for the movie and it looked ok.

More YA Dystopian Books for a Middle School Girl Like The Giver, Hunger Games and Legend

I have never heard of this! I don’t like the cover but it sounds really interesting.

NEWSOUL
Ana is new. For thousands of years in Range, a million souls have been reincarnated over and over, keeping their memories and experiences from previous lifetimes. When Ana was born, another soul vanished, and no one knows why.

NOSOUL
Even Ana’s own mother thinks she’s a nosoul, an omen of worse things to come, and has kept her away from society. To escape her seclusion and learn whether she’ll be reincarnated, Ana travels to the city of Heart, but its citizens are suspicious and afraid of what her presence means. When dragons and sylph attack the city, is Ana to blame?

HEART
Sam believes Ana’s new soul is good and worthwhile. When he stands up for her, their relationship blooms. But can he love someone who may live only once, and will Ana’s enemies—human and creature alike—let them be together? Ana needs to uncover the mistake that gave her someone else’s life, but will her quest threaten the peace of Heart and destroy the promise of reincarnation for all?

The Selection series by Keira Cass

This sounds familiar to me. It’s not usually the type of book that I would read, but I’m willing to skim it.

For thirty-five girls, the Selection is the chance of a lifetime. The opportunity to escape the life laid out for them since birth. To be swept up in a world of glittering gowns and priceless jewels. To live in the palace and compete for the heart of the gorgeous Prince Maxon.

But for America Singer, being Selected is a nightmare. It means turning her back on her secret love with Aspen, who is a caste below her. Then America meets Prince Maxon. Gradually, she starts to question all the plans she’s made for herself—and realizes that the life she’s always dreamed of may not compare to a future she never imagined.

I think these are too young for me.

I started the first book in 7th grade, but then I stopped. I read about 30 pages. It was ok. It just seemed very obvious and predictable about what was going to happen but many of my friends liked this series.

The Phantom Tollboth by Norton Juster

This was the read aloud in 5th grade. I did not enjoy the book or the movie. I’m not a fan of fantasy, so maybe that is why I didn’t like it.

A Wrinkle in Time series by Madeleine L’Engle

I read one page of it in 6th grade and I don’t really know what it’s about.

I saw the movie and the movie really scared me because I saw it in 1st grade.

From the Mixed Up Files of Mrs. Basil E. Frankweiler by E.L. Konigsburg

I haven’t read it but I have heard of it because my mom owns it. I think it’s a little too young for me now. My not says that it’s not but that’s my story and I’m sticking with it. I probably won’t read it.

This gets recommended a lot!

More than This by Patrick Ness

I’ve never heard of this. The cover kind of gives me a headache but I can cover it up if I decide to read it.

A boy drowns, desperate and alone in his final moments. He dies.

Then he wakes, naked and bruised and thirsty, but alive.

How can this be? And what is this strange deserted place?

As he struggles to understand what is happening, the boy dares to hope. Might this not be the end? Might there be more to this life, or perhaps this afterlife?

From multi-award-winning Patrick Ness comes one of the most provocative and moving novels of our time.

This sounds a little bit interesting. I do believe in spirit guides, so this might pertain to my interests. I would like to learn more about why this young boy is “dead.”

I saw a trailer for the movie and a lot of people said that this is a really, really good book. I can not read it because I know how it ends. I got scared from the trailer so I asked a friend how it ended.

When Thomas wakes up in the lift, the only thing he can remember is his name. He’s surrounded by strangers—boys whose memories are also gone.

Nice to meet ya, shank. Welcome to the Glade.

Outside the towering stone walls that surround the Glade is a limitless, ever-changing maze. It’s the only way out—and no one’s ever made it through alive.

Everything is going to change.

Then a girl arrives. The first girl ever. And the message she delivers is terrifying.

This gets recommended a lot!

Life as We Knew It by Susan Beth Pfeffer

My English teacher recommended this to our class but I didn’t think it was very interesting. A friend of mine read it and said that it was good.

I guess I always felt even if the world came to an end, McDonald’s still would be open.

High school sophomore Miranda’s disbelief turns to fear in a split second when an asteroid knocks the moon closer to Earth, like “one marble hits another.” The result is catastrophic. How can her family prepare for the future when worldwide tsunamis are wiping out the coasts, earthquakes are rocking the continents, and volcanic ash is blocking out the sun? As August turns dark and wintery in northeastern Pennsylvania, Miranda, her two brothers, and their mother retreat to the unexpected safe haven of their sunroom, where they subsist on stockpiled food and limited water in the warmth of a wood-burning stove. Told in a year’s worth of journal entries, this heart-pounding story chronicles Miranda’s struggle to hold on to the most important resource of all—hope—in an increasingly desperate and unfamiliar world.

I’m reading The Diary of Anne Frank. I also read The Book Thief (6th grade) and Number the Stars (5th grade). I really like reading about WWII. I watched a documentary on Hitler at home and I thought it was really interesting. I would consider reading this.

Facing The Lion is an inspiring autobiographical account of a young, non-Jewish girl standing up for her beliefs in the face of overwhelming pressure to conform to the Nazi propaganda machines. Simone refuses to accept the Nazi party and her simple acts of defiance lead her to be persecuted by her school and local officials, and ignored by friends. She is put in a harsh reform school until the end of the war.

How about you? Do you any more suggestions? I’d be grateful for any book recommendations for my picky teenage daughter! Thank you! 13 thoughts on “Dystopian YA Like The Giver, Legend and Hunger Games”