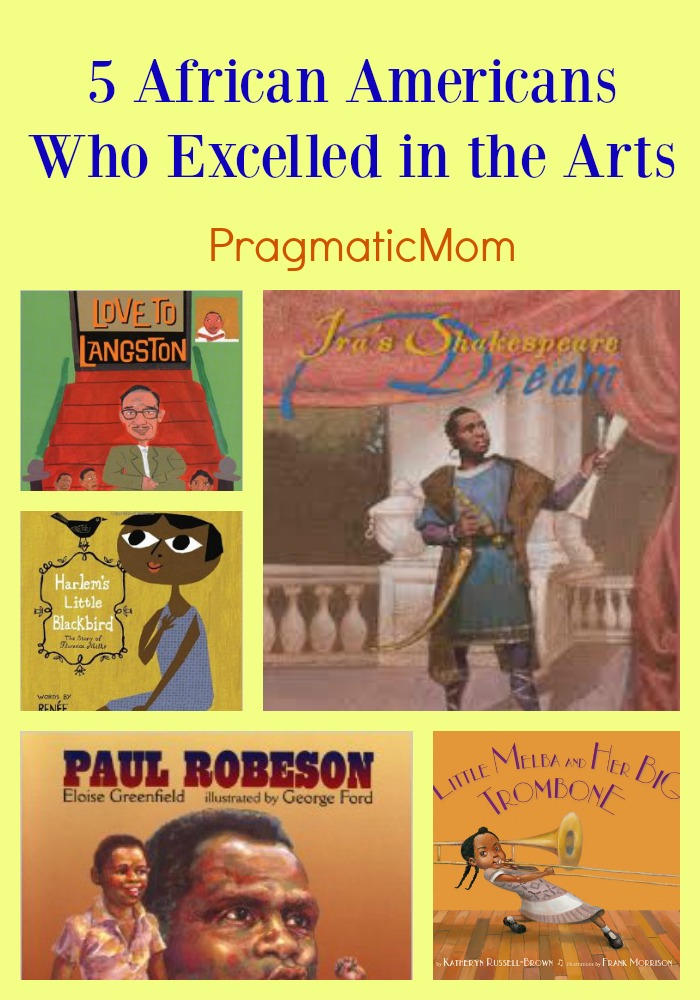 Please welcome my guest blogger today, Glenda Armand, the author of Ira’s Shakespeare Dream. If you agree about #OscarsSoWhite now in 2016, imagine how difficult it would be for people of color to succeed in the theater more than 100 years ago!

#OscarsSoWhite analysis by Time Magazine: See the Entire History of the Oscars Diversity Problem in One Chart An analysis of the full 92-year history of the Academy Awards shows that Hollywood’s highest honors have lagged the population on issues of race and representation.

Glenda Armand writes about the African Americans that lit the way for actors, writers, musicians of color today. While there has been tremendous progress made, I think we would all agree that there is still a long ways to go!

Despite segregation, discrimination, and even slavery, many African Americans became successful actors, writers, and musicians. Here is a list of five picture book biographies that introduce children to talented African Americans who overcame great odds to become world-renown artists. Once these remarkable people realized their own dreams, they used their success to light the path for others to achieve their own goals; whether it was to become an artist or, simply, to be free.

Since he lit the way for the others, I will begin with Ira Aldridge (and my book about him).

Ira Aldridge was born free in New York during the time of slavery. From his earliest days, he dreamed of being a Shakespearean actor. That dream came true despite discouragement from his minister father and the prejudice faced by black actors. In addition to those obstacles, Ira was almost sold into slavery when he was an adolescent. This last event had a profound effect on him, and when he did become the world’s first African American superstar, he used his fame and fortune to aid the cause of abolition. “I will not rest,” he said, ”until all of my people are free.”

About one century after Ira Aldridge left New York for England to follow his dream, Florence Mills was amazing audiences on New York stages.  Renee Watson tells Florence’s story in an upbeat style that fits “the little girl with the big talent.”

The daughter of former slaves, Florence and her mother used to sing during thunderstorms. They would sing until the storm went away.

Florence fought prejudice and injustice from the very beginning of her career. Whether refusing to perform if blacks were not allowed in the audience or turning down desirable roles, Florence was always focused on helping others: “If my voice is powerful enough to stop the rain, what else can it do?” And it was that remarkable “birdlike” voice that mesmerized audiences all over the world.

3. Love to Langston by Tony Medina

Tony Medina tells the story of Langston Hughes, a contemporary of Florence Mills, in a unique and engaging way. Medina uses stand-alone poems to recount important events from the poet’s life; as he struggled with racial prejudice, segregation, and a non-supportive father. The poems describe Hughes’ experiences  and feelings as Langston himself might have expressed  them at different stages of his life.

Children will easily relate to First Grade, I Do Not Like My Father Very Much and Grandma’s Stories. Medina gives the background and inspiration for each poem; which will motivate budding poets to put their own thoughts and feelings on paper.

When giving the background for one of the poems, A Bag of Oranges, the author tells how Hughes helped others who longed for their voices to be heard. When Hughes published anthologies, he included the works of new writers and poets. One of the unknowns that he helped was Pulitzer Prize winner, Alice Walker. When he was ill and near the end of his life, Langston Hughes was touched by a simple gift of fruit he received from Alice Walker.

Paul Robeson excelled in many endeavors. Greenfield interweaves Robeson’s activism, career and personal life into a moving and eloquent story of a truly Renaissance Man. The only African American in his college class, he became the valedictorian. The first black on the football team, he was named All-American End. The list goes on. His greatest gift, though, was his deep, resonating voice.

While he used that voice to become a great actor and singer, he also raised it to speak out against racial injustice. Decades earlier, Ira Aldridge had spoken to his audiences about the evils of slavery. Now, in post-Reconstruction America, Robeson enlightened concert and theatergoers about the hardships his people still faced. And the connection between Robeson and fellow Shakespearean actor, Ira Aldridge, doesn’t end there. Robeson was the first black actor to play the lead in Othello in London since Aldridge had played the role over half a century earlier.

5.  Little Melba and Her Big Trombone by Katherine Russell-Brown

The only one of the five featured artists who is known for playing a musical instrument, Melba Liston truly deserved the spotlight. Born in Kansas City during the heyday of the Harlem Renaissance, she began playing the trombone when she was only seven. She was quickly recognized as a prodigy. But as a woman in a “man’s field” and an African American in pre-Civil Rights era America, she encountered a double dose of prejudice. In spite of that, Melba took her place among the greatest musicians of her time. She excelled as a trombonist, arranger and bandleader. The author includes an extensive discography of Melba’s work. So we who never heard her music live can still appreciate and be inspired by Melba’s influence, talent, and determination. Her music still plays. Her light will always shine. 6 thoughts on “This Little Light of Mine: 5 African Americans Who Excelled in the Arts”