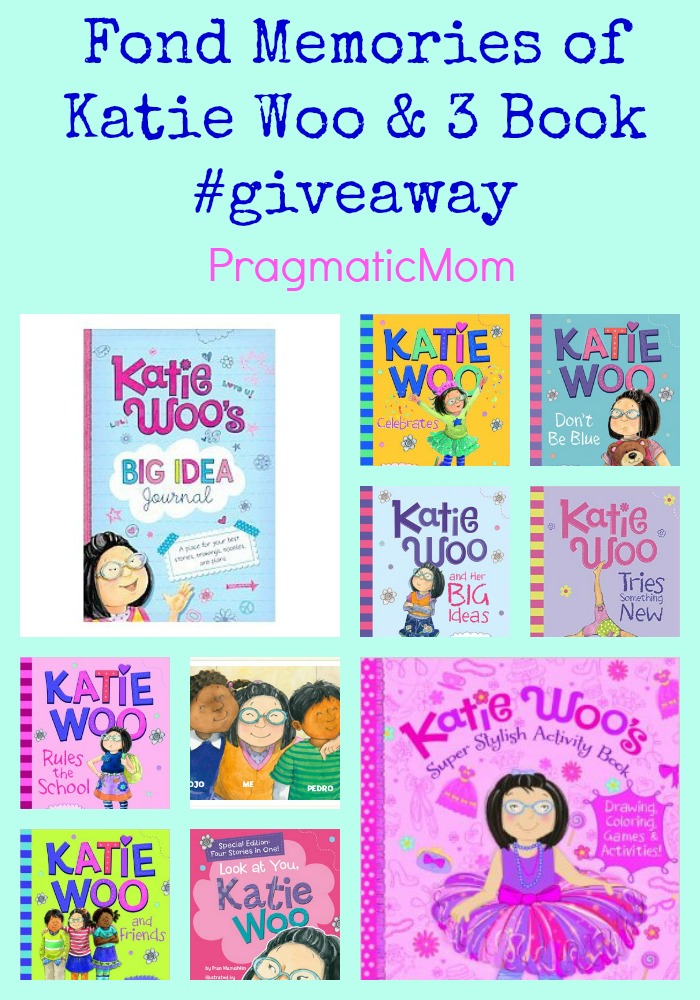 When PickyKidPix was in 5th grade, she fell in love with the Katie Woo series but it’s not what you think. She and her friend Griffin liked to hang out in the Early Chapter Book corner of the library during library time. I would imagine that they were screwing around, as they tend to do. Their friend Avi found them there, and low and behold, were the Katie Woo books.

At first, instead of looking for a book to check out, they would read the Katie Woo books and act out the parts. You’d think that my daughter, being the only female AND Asian-American would be Katie Woo! No, “that’s racist, Mom,” says my daughter. She was the narrator because that part has the most lines. My daughter is in the center and Griffin is to the right. Two members of the Katie Woo Club.

Griffin, who is bi-racial (and proud of it) African-American, was Katie Woo. Avi played all other characters. This library time diversion morphed into the Katie Woo Club, an exclusive club that my daughter assures me everyone wanted to join. Membership was exclusive to the three original founding members though, something that reminded me of Katie Woo, except that she would be nicer and would relent to let in new members.

The Katie Woo Club made up chants that included “Katie Woo is watching you!” (hissed at kids who were misbehaving in class), and the all-purpose, “Katie Woo, we love you!” They were loud, disruptive, and subversive. Early Chapter books, apparently, are for everyone.

Their school librarian supported their Katie Woo obsession. She helped them use an app to create their own Katie Woo story: Katie Woo Goes to Color Day. This story was based on Color Day at their elementary school — the best day of the year — where the entire school competes in a kind of mini-Olympics outside all day. In their story, Katie Woo gets upset when her team loses the Pizza Box Relay Race. Each team must stack a pizza box as a team and run back and forth up a lane as each box is added. You need to stack ten boxes and run them up and back to win. In their story, Katie gets mad at her friends when they lose the race. She then has to find a way to make it up to them. I think Katie Woo served as a safe space for my daughter to express anxieties about the changes that come with graduating from elementary school. Her friend Avi was headed for private middle school. She and Griffin would be at a new school where there would be 400 kids in their grade instead of 65 like in elementary school. This trio might not be able to spend time together in school but they will always have Katie Woo and that’s why these books elicit such a strong and warm association for them.

When I received a stack of Katie Woo books, PickyKidPix and her two Katie Woo club mates were delighted. She snapchatted them immediately with the goods. She insisted on keeping the books for herself and will gift a few to her friends as Christmas presents.  I’ve managed {barely} to save a few to giveaway to my readers.

I enjoyed my Katie Woo education reading a stack of these Early Chapter Books. PickyKidPix knew I was judging first round of Early Chapter Books and Easy Readers for the Cybils and was appalled that Katie Woo was not nominated. She will be next year; my daughter in on it!

These are the things that Katie Woo and my daughter have in common:

I really like how Katie Woo deals with relentless teasing from a school bully. It could be that Roddy likes Katie Woo and his teasing is his misguided attempt to get her attention or he might just be a bully. Either way, Katie comes up with a strategy to shut him down.

Katie doesn’t always behave well herself. When Jake loses his new toy airplane, Katie has something to do with that but it’s only when Jake is ready to cry that she owns up to her toy theft. Young readers can relate to Katie Woo as a real person who makes both good and bad decisions. I think that is is the appeal of this series.

It seemed like a great idea; learn gymnastics and become a TV star. Katie eagerly signs up for a class but balancing on a beam and doing a perfect somersault is hard. She wants to give up but her friend encourages her to keep trying. In the spirit of not giving up, she tries other new things including musical instruments and Super Scouts. Even Mother’s Day is an opportunity for her to find a different kind of way to celebrate.

Katie Woo and Her Big Ideas by Fran Manushkin, illustrated by Tammie Lyon

Katie has ideas of how to save the earth, celebrate her birthday, find the perfect pair of shoes, and help out in the kitchen. Katie’s ideas are great but what is even better is learning that her ideas work the best when she thinks about others.

It’s a slew of celebrations for Katie Woo: Valentine’s Day, 4th of July, Halloween and Thanksgiving. Katie’s misadventures always seem to right themselves and help others at the same time. She’s lucky that way!

Katie Woo goes through big adventures in this book: she sleeps over at her grandparents house by herself, spend the night at a shelter due to large storm, and moves to a new house because of her mom’s new job. Despite Katie’s trepidations that come with seismic change, she adjusts and adapts like a trooper!

Katie Woo Every Day’s an Adventure by Fran Manushkin, illustrated by Tammie Lyon

Katie Woo gets to finally ride her first horse, fly on an airplane, and experience a new substitute teacher who may or may not like Katie the most. Young readers can relate to Katie’s every day adventures, that while ordinary, are monumental to kids. They can also relate to Katie’s struggle to make the right decision. It’s hard to help a new girl find her ballet shoes when that means Katie will not longer be the best dancer in class. What would you do? Katie Woo’s adventures help kids experience these challenging predicaments and work out their moral compass in a safe way.

Please fill out the Rafflecopter below to enter and leave a comment with your first, second and third choice. Thanks!

I would have loved this for PickyKidPix when she was younger as a summer writing project! Katie Woo fans can use these writing prompts on the beautifully illustrated pages to draw, doodle, write stories and hatch plans. [journal with writing prompts, ages 6 and up]

Look at You, Katie Woo by Fran Manushkin, illustrated by Tammie Lyon

A special edition, Four Stories in One! version of Katie Woo. I like how Katie Woo is a typical kid; she’s not some saccharine character who never does anything wrong. Katie Woo has friends but sometimes she acts selfishly and her friends get mad at her, just like in real life. I think that the big appeal of Katie Woo to my daughter and her friends. She seems like a real person. [early chapter book, ages 5 and up]

This is a fun coloring, drawing, puzzle “on the road or at a restaurant” activity book for Katie Woo fans! Just bring your own crayons or markers. There is actually a certificate at the end for the Katie Woo Club and it’s not as exclusive as my daughter’s club! [activity book, ages 4 and up]