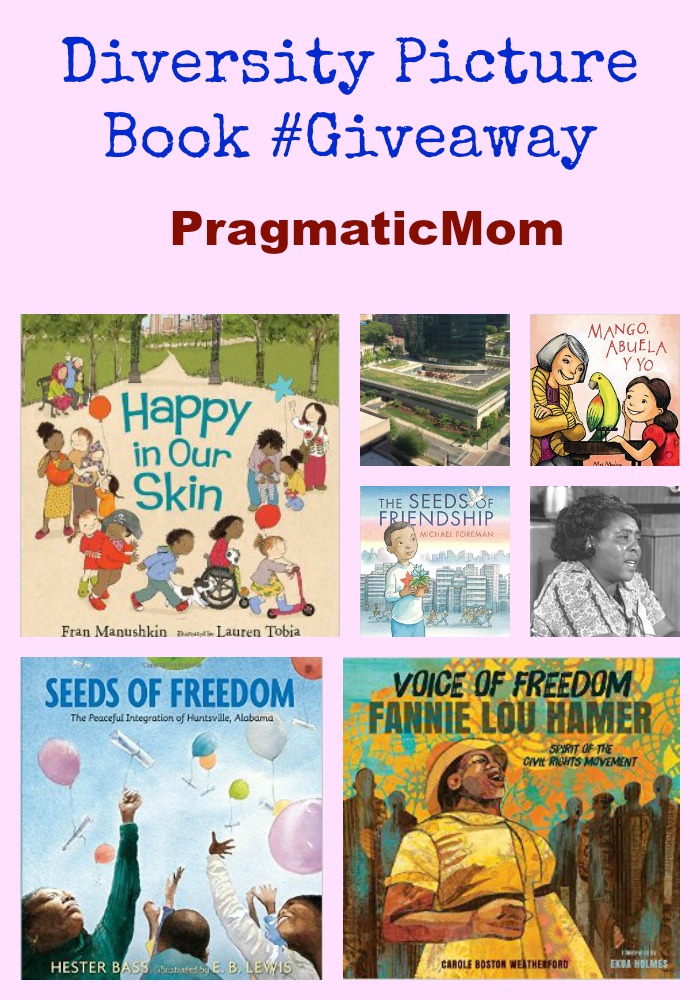 I had such a great time meeting the folks at Candlewick Press at a lunch they hosted for P. J. Lynch. I asked them for some diversity books to celebrate Multicultural Children’s Book Day and they were kind enough to send me this collection. I hope these books inspire you too!

Happy in Our Skin by Fran Manushkin, illustrated by Lauren Tobia

Babies of all colors are celebrated in this rhyming picture book with a central message about each of us is unique! [picture book, ages 2 and up]

You look so cute in your brand-new birthday suit.

This is how we all begin:

small and happy in our skin.

I’d use this picture book with my kids who are learning Spanish. It’s perfect because a granddaughter is helping her grandmother learn English (with the help of a parrot!). [Spanish picture book, ages 4 and up]

The Seeds of Friendship by Michael Foreman This building in Hartford, Connecticut reminded me of The Seeds of Friendship.

If you like The Gardener by Sarah Stewart or The Curious Garden by Peter Brown, try this diversity pick! Adam moved to the big city where he feels alone. He’s too shy to join the kids playing down below but when snow falls, he joins them. First he’s on the perimeter building a snow-elephant. The kids help him build a much larger one. When he starts school, his new friends show him the school garden, an oasis of green in a sea of concrete. When his teacher gives him some seeds to plant, wondrous things happen. Adam and his friends use these seeds of freedom to transform their corner of the world. [picture book, ages 4 and up]

The violence of the Civil Rights Movement is what made headlines and the images of what we remember today. This is a quieter story: the peaceful integration of Huntsville, Alabama. Their African-American citizens also fought for Civil Rights conducting sit-ins, boycotting stores, and using public parks designated for whites only.

Little by little, the people of Huntsville come together to support freedom. Governor Wallace has closed all Alabama public schools planning to admit black students but twelve white students attend a private religious school with all black students. It’s the first case of so-called reverse integration in Alabama.

Why was Huntsville able to integrate without the violence of other cities such as Birmingham, Alabama? Huntsville record was not spotless but there was commitment on both sides to face integration without violence. It helped that Huntsville is the “Space Center of the Universe.” Its economic base was dependent on government funding.

This advanced picture book gives a perspective of how a few people can make difference to find alternatives to what the “norm” is. It shows that what seems impossible can be achieved with creativity, courage and cooperation. [advanced picture book, ages 8 and up] The truest thing we have in this country at this time is little children … if they think you’ve mad
e a mistake, kids speak out. Fannie Lou Hamer

Malcolm X called Fannie Lou Hamer “the country’s number one freedom-fighting woman.” Born to sharecroppers in Mississippi, Fannie Lou worked alongside her family from dawn to dusk in the cotton fields and went on to become a hero of the Civil Rights Movement.

Her leadership and powerful singing voice fired up rallies and inspired others. She led during a time when registering to vote was dangerous; she received severe beatings from police that caused permanent damage to her eye sight and kidneys. She knew well too, the white Freedom Fighters, Michael Schwerner and James Chaney, and cried when they were killed by the Ku Klux Klan. But nothing could scare her into backing down.

Fannie Lou Hamer was instrumental in organizing Mississippi’s Freedom Summer for the Student Nonviolent Coordinating Committee (SNCC), and later became the vice-chair of the Mississippi Freedom Democratic Party, which she represented at the 1964 Democratic National Convention in Atlantic City, New Jersey. Wikipedia [advanced picture book, ages 9 and up]

I’m giving away Happy in Our Skin by Fran Manushkin, illustrated by Lauren Tobia. Please fill out Rafflecopter below to enter.